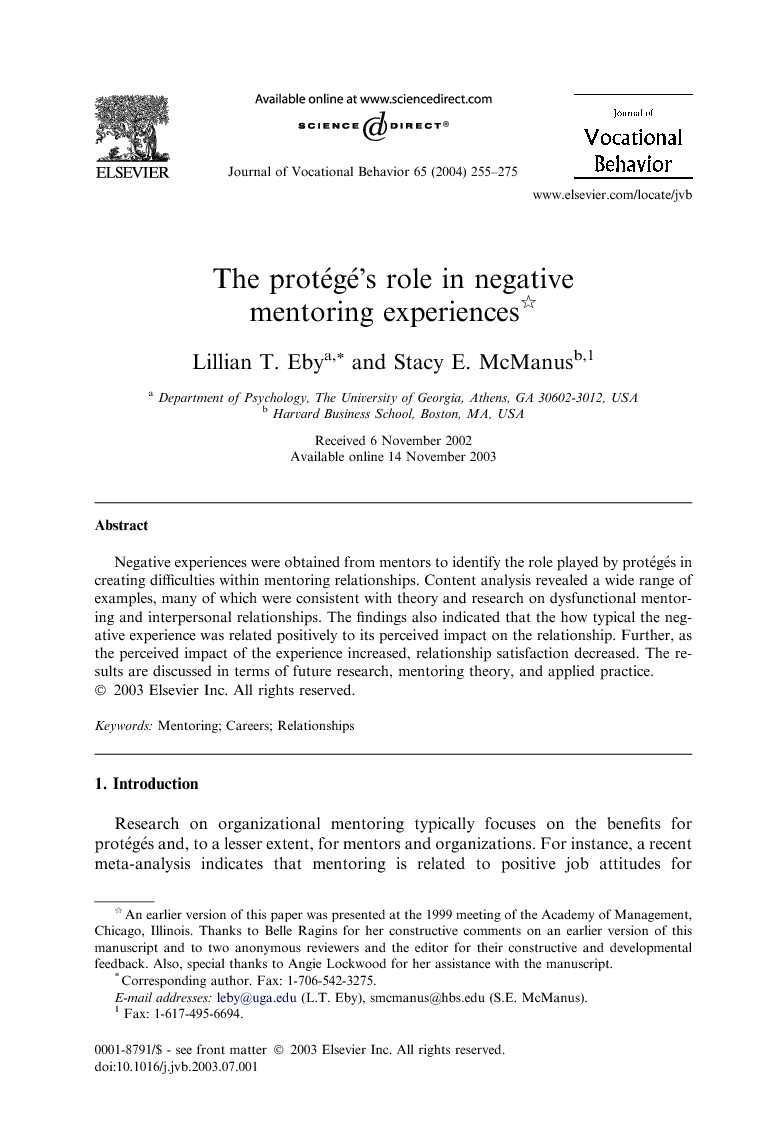 Negative experiences were obtained from mentors to identify the role played by protégés in creating difficulties within mentoring relationships. Content analysis revealed a wide range of examples, many of which were consistent with theory and research on dysfunctional mentoring and interpersonal relationships. The findings also indicated that the how typical the negative experience was related positively to its perceived impact on the relationship. Further, as the perceived impact of the experience increased, relationship satisfaction decreased. The results are discussed in terms of future research, mentoring theory, and applied practice.

Research on organizational mentoring typically focuses on the benefits for protégés and, to a lesser extent, for mentors and organizations. For instance, a recent meta-analysis indicates that mentoring is related to positive job attitudes for protégés, as well subjective and objective indicators of career success (Allen, Eby, Poteet, Lentz, & Lima, in press). Mentors report benefits as well, including better support networks, satisfaction from helping others grow and succeed, and access to information that facilitates job performance (Allen, Poteet, & Burroughs, 1997). Organizations may also benefit since mentoring is related to lower protégé intentions to turnover (Allen et al., in press). While studying benefits of mentoring has demonstrated the importance of these relationships, little research has addressed the long-held contention that mentorships are susceptible to problems (Kram, 1985; Levinson, Darrow, Levinson, Klein, & McKee, 1978). Two recent theoretical papers discuss dysfunctional mentoring and suggest ideas for future research (Feldman, 1999; Scandura, 1998) and two empirical studies examine protégés' reports of negative experiences with mentors (Eby, McManus, Simon, & Russell, 2000; Eby & Allen, 2002). While these represent important extensions of the mentoring literature, many questions remain. Further, existing research examines relational problems from the perspective of the protégé. Feldman (1999) notes: “As a counterweight to the `protégé as victim' model, more empirical research is needed on toxic protégés… Which behaviors do protégés engage in to bring upon the wrath or displeasure of their mentors?… perhaps the greatest need in future empirical research is data from the mentors themselves…” (p. 274). Further, discussions of relational problems tend to make the distinction between functional versus dysfunctional mentoring, rather than recognizing that mentoring is likely to be marked by both positive and negative experiences over time. However, recent work by Ragins, Cotton, and Miller (2000) on “marginal mentoring” (p.1190) suggests that it is important to conceptualize mentoring difficulty as existing on a continuum where some relationships are marginally effective, some are ineffective, and others are truly dysfunctional. The present study adopts such an approach and pursues two objectives. First, a continuum of relational problems from the mentor's perspective is proposed and examples of negative experiences with protégés are mapped on to this continuum. Second, the current study explores how both the reported typicality of the overall negative experience with a protégé, as well as its perceived impact on the relationship as whole, is related to relationship quality.

Several limitations of the current study should be noted. First, the sample of mentors was quite homogeneous in terms of race (mostly Caucasian), managerial level (mostly high level managers), and sex (mostly males). While this probably represents the average profile of mentors in most organizations, the unique negative experiences that might face non-Caucasian and female mentors were not addressed. Given increasing workplace diversity, this represents an important area for future research. Related to the methodology utilized, respondents were asked to provide examples of their most negative mentoring relationship. This helped focus respondents' attention on a particularly salient negative mentoring relationship, but doing so did not allow them to report other, perhaps less severe, experiences. Moreover, the narrative nature of the responses did not allow for follow-up questions. Future research on this topic would benefit from the use of structured interviews that cover the gamut of negative experiences with protégés beyond reports of the most negative relationship. It is also important to note that we could not ascertain the veracity of mentors' statements, and it is possible that mentors' recollections were different from the way the events actually occurred. To help alleviate this concern, information reported by mentors was not coded unless it referred to specific actions or behaviors on the part of the protégé. Furthermore, strong arguments have been made that perceptions of a relationship are important to study in their own right since they influence the future course of a relationship (Hinde, 1981). Another limitation involves the use of single-item measures of typicality, perceived impact, and relationship satisfaction. Due to survey space limitations, multi-item measures could not be used. Certainly this would have allowed for stronger measurement, and given that we could not assess the reliability of these measures, caution should be used in interpreting the results of the path analysis. Further, using only three response options for the typicality and impact questions restricts variance on these measures and attenuates some of the relationships illustrated in Table 3 and Fig. 2. Finally, the use of a deductively oriented taxonomy to classify examples may be viewed as a limitation since it assigns meaning to participants' responses rather than allowing examples to emerge from the data. However, there are several reasons why a deductively oriented taxonomy was appropriate in this research. First, the study was designed to confirm existing theory rather than create a new one, and under such circumstances using an a priori coding scheme is recommended (Miles & Huberman, 1994). Second, research comparing first-order (inductively derived) and second-order (deductively derived) constructs illustrates considerable overlap between the two (Taber, 1991). Finally, we verified our a priori taxonomy by having a subject matter expert inductively derive categories. The results converged nicely with our a priori coding scheme (information on this verification process is available upon request). Despite these limitations, the current study offers an initial examination of negative mentoring experiences from the mentor's perspective and organizes such experiences along a meaningful continuum of severity. Given the widespread use of mentoring in organizations, future research is needed to further understand the antecedents, correlates, and consequences of the wide variety of difficult mentoring experiences. We encourage such efforts and hope that consideration of both the positive and negative aspects of mentoring leads to a more balanced and realistic perspective on the promises, as well as the potential pitfalls, of organizational mentoring.