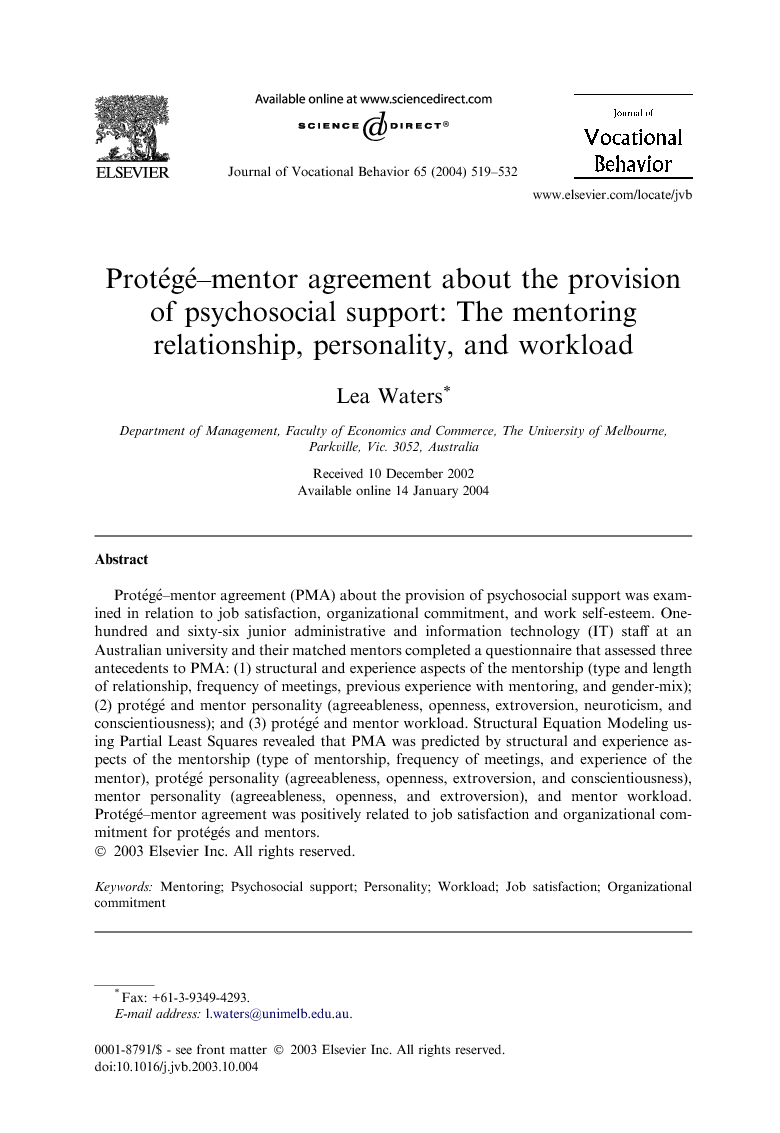 Protégé–mentor agreement (PMA) about the provision of psychosocial support was examined in relation to job satisfaction, organizational commitment, and work self-esteem. One-hundred and sixty-six junior administrative and information technology (IT) staff at an Australian university and their matched mentors completed a questionnaire that assessed three antecedents to PMA: (1) structural and experience aspects of the mentorship (type and length of relationship, frequency of meetings, previous experience with mentoring, and gender-mix); (2) protégé and mentor personality (agreeableness, openness, extroversion, neuroticism, and conscientiousness); and (3) protégé and mentor workload. Structural Equation Modeling using Partial Least Squares revealed that PMA was predicted by structural and experience aspects of the mentorship (type of mentorship, frequency of meetings, and experience of the mentor), protégé personality (agreeableness, openness, extroversion, and conscientiousness), mentor personality (agreeableness, openness, and extroversion), and mentor workload. Protégé–mentor agreement was positively related to job satisfaction and organizational commitment for protégés and mentors.

This cross-sectional study captured PMA at one point of time, yet it is likely that PMA is a dynamic phenomenon. Whilst there may be some relatively unchangeable predictors of PMA such as personality and previous experience, there are also likely to be some antecedents that change over time. Situational factors such as workload, work-life issues, changes to company policies, and practices (e.g., mentoring training programs), and changes to organizational climate (e.g., downsizing) may alter PMA. Length of the mentorship did not come out to be a significant variable. In future it may be more useful to consider the stages of mentoring, rather than assuming that length is linearly related to PMA. It may be that these findings are only applicable to mentoring within universities. However, as the employees in this study were involved in the operational and business functions of the university there may be some generality to the findings. Moreover, given that the antecedents in this study were either dispositional (e.g., personality) or not unique to a university sample (e.g., workload) the results may relate to other contexts. The extent to which protégés and mentors agree about the level of psychosocial support being provided in their relationship is an important factor for work outcomes. However, this study has shown that PMA is not readily achieved. While the results point to a number of situational and dispositional factors that can be used to improve PMA, further work is needed to foster a greater understanding of the antecedents and outcomes of PMA.