عنوان انگلیسی
Mentoring in academia: An examination of the experiences of protégés of color
دانلود فوری مقاله + سفارش ترجمه 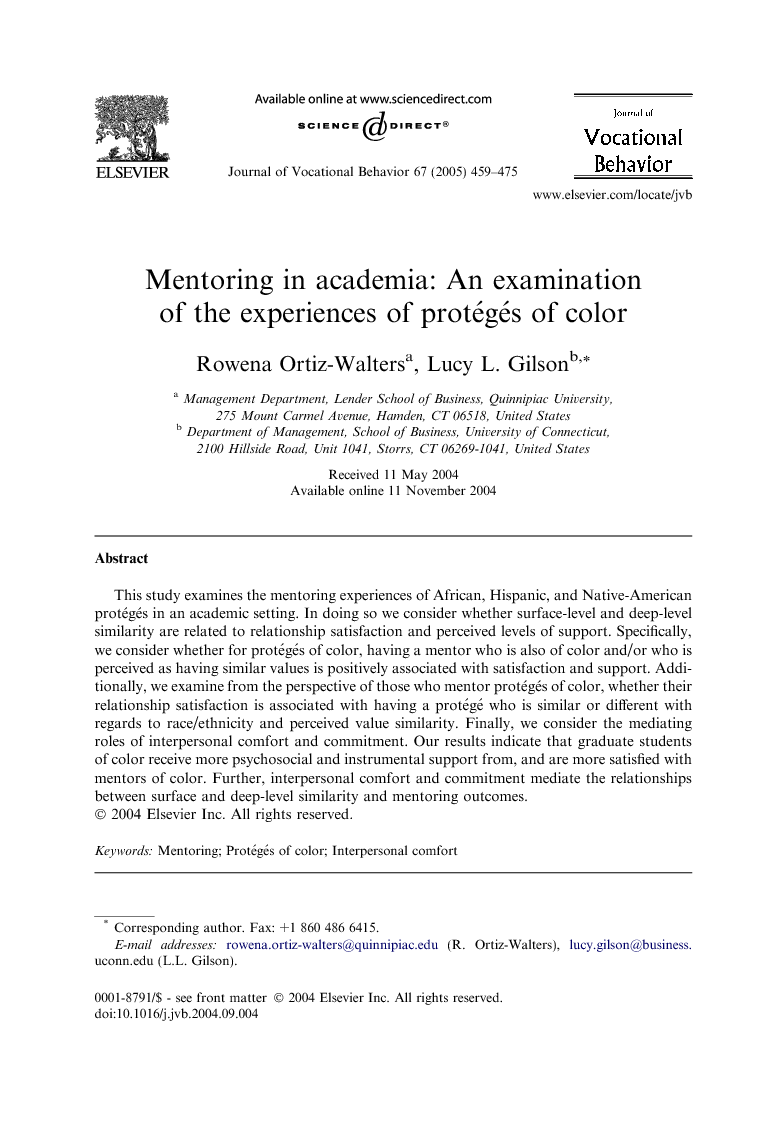 This study examines the mentoring experiences of African, Hispanic, and Native-American protégés in an academic setting. In doing so we consider whether surface-level and deep-level similarity are related to relationship satisfaction and perceived levels of support. Specifically, we consider whether for protégés of color, having a mentor who is also of color and/or who is perceived as having similar values is positively associated with satisfaction and support. Additionally, we examine from the perspective of those who mentor protégés of color, whether their relationship satisfaction is associated with having a protégé who is similar or different with regards to race/ethnicity and perceived value similarity. Finally, we consider the mediating roles of interpersonal comfort and commitment. Our results indicate that graduate students of color receive more psychosocial and instrumental support from, and are more satisfied with mentors of color. Further, interpersonal comfort and commitment mediate the relationships between surface and deep-level similarity and mentoring outcomes.

Mentoring research has continued to find that protégés benefit from having an experienced organizational member (mentor) provide them with career and personal support (Kram, 1985). To this end, individuals who receive mentoring report a number of positive affective and career outcomes (Dreher and Cox, 1996, Nielson et al., 2001 and Sosik and Godshalk, 2000). In an academic environment, mentoring is in many ways very different from organizational mentoring (Van Dyne, 1996). First, in academia, mentoring is focused on socializing protégés into a profession (professional socialization) rather than an organizational role. Second, the timing of relationship transitions occur in a more predictable manner. Finally, because of the structure of the academic system and calendar, academic mentoring involves a natural cycling of relationships. For instance, a student will typically work with a mentor for 3–5 years and then graduate following which they may continue to work with their mentor as more of an equal or peer. However, despite these distinctions, to receive the professional training needed to become a Professor, protégés need mentors who can guide them in their research and teaching, help them find jobs, introduce them to important others in their field, and advise them on how to handle the demands of the profession (Clark et al., 2000 and Gilbert et al., 1983). Because empirical mentoring research has predominantly sampled white Caucasian protégés, less is known about the experiences of protégés of color along with the experiences of those individuals who mentor them. In addition to mainly focusing on Caucasian protégés, the majority of mentoring research, in both higher education and management, has considered the protégé’s experiences. Considerably less attention has been given to understanding the relationship from the perspective of the mentor. Therefore, to complement the student’s perspective, we also investigate the perspective of those who mentor protégés of color. The focus of this research is on the mentoring of African, Hispanic, and Native-American protégés in an academic setting. The association we sample refers to African, Hispanic, and Native-Americans as being “of color,” therefore we have used this terminology to refer to our protégés and mentors who are not White Caucasians. In this study, we examined the relationship between surface-level similarity, having a mentor or protégé who is of a similar racial/ethnic background and deep-level similarity, having a mentor or protégé who is perceived to share similar values, on relationship satisfaction and support. Further, to better understand the underlying psychological mechanisms through which similarity may affect the dynamics of mentoring, interpersonal comfort, the feeling of safety and security in a relationship, and commitment to the relationship are considered as mediators.