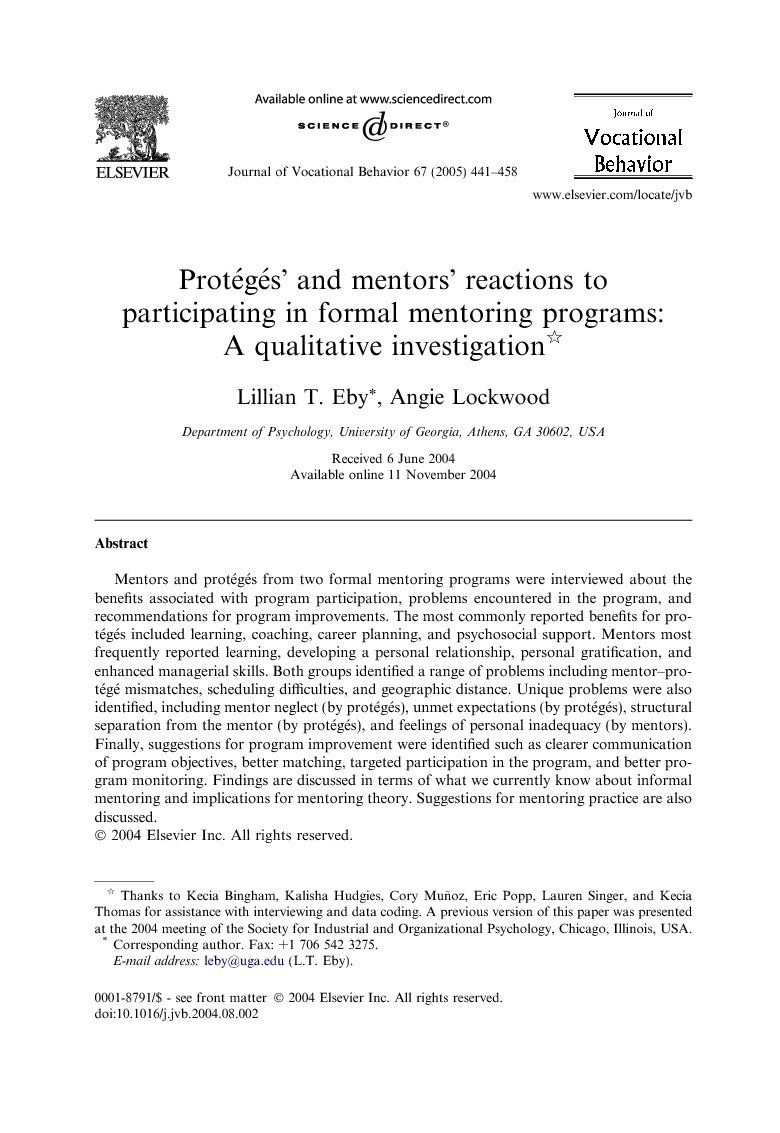 Mentors and protégés from two formal mentoring programs were interviewed about the benefits associated with program participation, problems encountered in the program, and recommendations for program improvements. The most commonly reported benefits for protégés included learning, coaching, career planning, and psychosocial support. Mentors most frequently reported learning, developing a personal relationship, personal gratification, and enhanced managerial skills. Both groups identified a range of problems including mentor–protégé mismatches, scheduling difficulties, and geographic distance. Unique problems were also identified, including mentor neglect (by protégés), unmet expectations (by protégés), structural separation from the mentor (by protégés), and feelings of personal inadequacy (by mentors). Finally, suggestions for program improvement were identified such as clearer communication of program objectives, better matching, targeted participation in the program, and better program monitoring. Findings are discussed in terms of what we currently know about informal mentoring and implications for mentoring theory. Suggestions for mentoring practice are also discussed.

Mentoring is an intense interpersonal relationship where a more senior individual (the mentor) provides guidance and support to a more junior organizational member (the protégé) (Kram, 1985). In addition to providing career guidance and personal support, mentoring can facilitate socialization into the organization (McManus and Russell, 1997 and Ostroff and Kozlowski, 1993) and be a mechanism for on-the-job training for protégés (Eddy, Tannenbaum, Alliger, D’Abate, & Givens, 2001). Mentoring is also related to important protégé outcomes, including both subjective (e.g., job satisfaction, career satisfaction) and objective (e.g., salary, promotion rate) indicators of career success (Allen, Eby, Poteet, Lima, & Lentz, 2004). In an effort to capitalize on the benefits of mentoring, many major U.S. corporations such as Wachovia Corporation, MTV Networks, Lockheed-Martin, American Airlines, Bank of America, Charles Schwab, Mariott International, Sarah Lee, and Proctor and Gamble have formal mentoring programs in an effort to attract, develop, and retain high quality employees (Eddy et al., 2001). While formal mentoring programs are used extensively as a career development tool, most of the empirical research is either based on informal or spontaneously developed mentoring relationships or has failed to ask protégés whether or not they are involved in formal or informal relationships (Wanberg, Welsh, & Hezlett, 2003). This represents a gap in the literature since formal and informal mentorships differ in terms of how the relationship is initiated (e.g., spontaneous attraction versus third-party matching), the structure of the relationship (e.g., relationship length, contracting goals), and other relational characteristics (e.g., formality of interactions) (Ragins & Cotton, 1999). These factors may influence the benefits obtained through participation in formal mentoring programs for mentors and protégés, and contribute to relationship problems such as poor interpersonal fit or lack of perceived commitment to the relationship. Thus, rather than assume that formal relationships mirror informal ones, we concur with Wanberg and colleagues (2003) and propose that it is essential to examine formal mentoring relationships in their own right. This will allow the empirically based development of theory and empirical research on formal mentoring. Given the limited research on formal mentoring programs and the repeated call for empirical research on the topic (Noe et al., 2002 and Wanberg et al., 2003), the present study provides an examination of the benefits and problems associated with participation in formal mentoring programs. Because so little is known about formal mentoring programs we take a qualitative, exploratory approach. Qualitative research is particularly useful in the early stages of research, such as the case here, where the identification of relevant variables and contextual conditions related to the phenomenon are important (Babbie, 2001). There are several unique characteristics of the present study. First, data were obtained using in depth interviews with program participants, providing a rich source of qualitative data. Second, we examined both protégés’ and mentors’ experiences. To our knowledge, no published research has investigated mentors’ experiences in formal mentoring programs yet scholars repeatedly call for the inclusion of their perspective. Third, protégés and mentors were asked questions about how the formal mentoring program was designed and implemented, along with suggestions for improvement. The focus on specific program characteristics adds to a small body of empirical research on formal mentoring program characteristics (Allen et al., 2004a, Allen et al., 2004b and Ragins et al., 2000).

Several limitations associated with the present study should be noted. First, the findings are based on a relatively small number of protégés (n = 39) and mentors (n = 24) participating in one of two mentoring programs which touted learning and development as their primary program goals. While this may limit generalizability, it is important to note that our sample size is consistent with, and in many cases larger than, what is typically reported using similar qualitative methods (e.g., compare Allen et al., 1997 to Kram, 1985). Further, learning and development are two of the most commonly reported goals of formal mentoring programs (Eddy et al., 2001). Moreover, while only two organizations were sampled they differed considerably. One was a large for-profit telecommunications company and the other was a nationwide community-based voluntary health organization with chartered divisions throughout the country and more than 3400 local units. Moreover, participants in the study came from various geographic areas of the United States and from various divisions within these two large organizations. It is also notable that, on average, both mentors and protégés had worked in their respective organizations for a relatively long time and had similar job tenures, both of which may place boundary conditions on our findings. This likely reflects the strong promotion from within culture of both organizations and fact that both programs targeted high potential protégés who had already entered the management suite. It may also reflect economic conditions and the associated slow growth that both companies experienced during the time of data collection. A final limitation is our inability to match mentor and protégé data. A fascinating area for future research is an in-depth examination of the relationship between mentor–protégé dyads’ experiences in formal mentoring programs. Notwithstanding these limitations the present study makes an important contribution to research on organizational mentoring. By conducting a qualitative exploration of formal mentoring programs our findings provide research fodder for theory development and future quantitative research on formal mentoring. We also highlight the importance of studying both protégé and mentor in an effort to fully understand formal mentoring; meaningful differences were found between protégés’ and mentors’ experiences in formal mentoring relationships. Our study also provides many specific recommendations for practice, based on the actual experiences of program participants. While several “how to” books exist on the design and development of formal mentoring programs (e.g., Murray, 1991), these resources are not grounded in empirical research. As such, the present study serves to bridge the important gap between research and practice on formal mentoring programs.