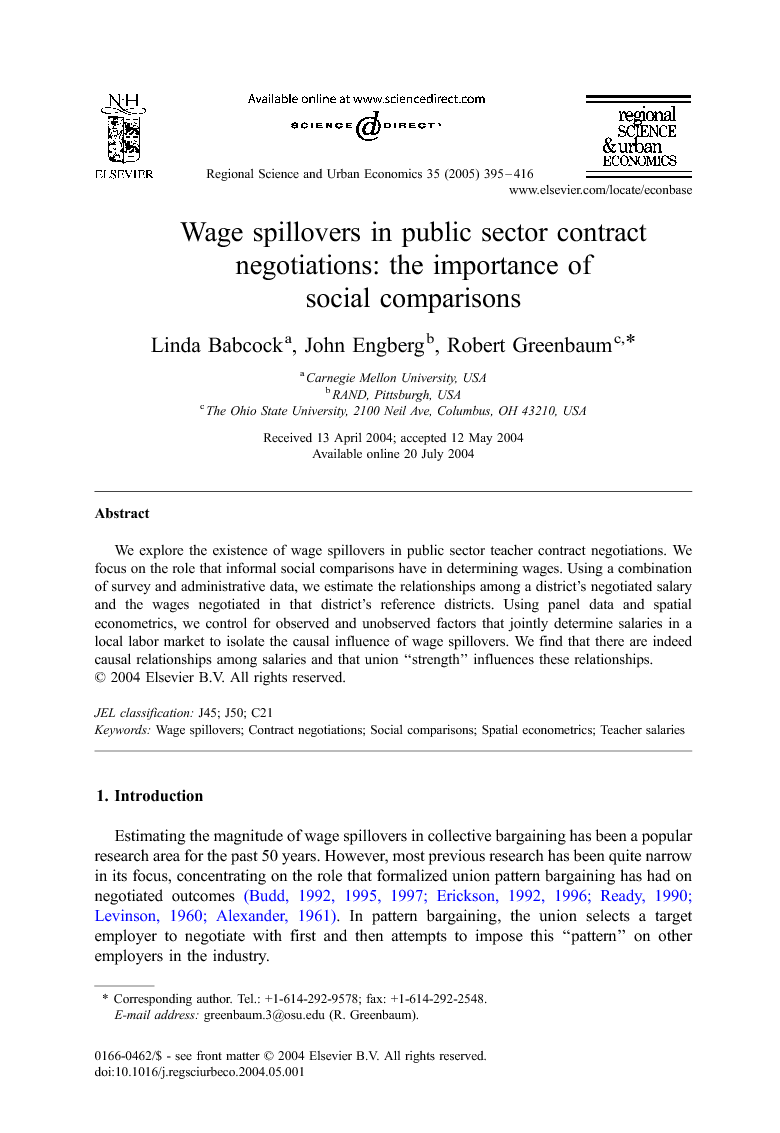 We explore the existence of wage spillovers in public sector teacher contract negotiations. We focus on the role that informal social comparisons have in determining wages. Using a combination of survey and administrative data, we estimate the relationships among a district's negotiated salary and the wages negotiated in that district's reference districts. Using panel data and spatial econometrics, we control for observed and unobserved factors that jointly determine salaries in a local labor market to isolate the causal influence of wage spillovers. We find that there are indeed causal relationships among salaries and that union “strength” influences these relationships.

In this paper, we estimate the magnitude of wage spillovers in teacher contract negotiations. Because there has been a large shift in union presence from the private to the public sector, it is appropriate that the analysis of wage spillover among bargaining units should also shift to the public sector. We have formulated spillover not as a single leader with many followers, as usually is the case in the private sector, but as an ongoing process in which local public bargaining units look to recently negotiated contracts in similar jurisdictions. During the contract negotiation process, each side enters into bargaining with a list of referents to be used as comparables. We estimate the separate influence on the negotiated outcome of the referents that are common to both sides, those used only by the union and those used only by the board. We found that the salaries of districts referred to by the union have the largest impact on the negotiated outcome. Using our preferred specification, we found spillovers of approximately 87%; therefore, when salaries of the union-only referents increase by 10%, the negotiated outcome increased by approximately 8.7%. This specification, reported in the first column of Table 2, controls for potential endogeneity of referents' salaries by using an instrumental variable estimator and controls for unobserved spatially autocorrelated factors that affects wages. Our results are also insensitive to the inclusion of the salaries of neighboring districts as a regressor. Our estimates are quite similar to those found in the recent wage spillover literature. Budd (1992, 1997) finds estimates in the range of 65% to 90% for spillover in UAW contracts. This is somewhat surprising given the very different mechanisms by which spillovers are modeled. Budd focuses on formal pattern bargaining, and our interest in this paper is on informal social comparisons made by the negotiators. We also found that the impact of each side's referents on the negotiated outcome depends on each side's “strength” in the negotiations. Using an exogenous measure of union strength, our results suggest that in environments supportive of the goals of organized labor, the influence of union-only referents is much stronger than in environments less supportive of organized labor. In these less-supportive environments, the board-only referents and the referents the union and board have in common become more influential. For districts with high union strength, only the union's list influences the negotiated outcome. For districts with union strength below the median, the union's list has approximately the same impact as the combination of the board-only and common lists. Why does the union-only list always have an influence, while the other lists only have an influence when the union is weak? Perhaps, the explanation lies in the range of union strength values contained in the sample. Because all districts are unionized and have the right to strike, presumably all have some strength. It is possible that our sample only contains cases that range from negotiations with balanced strength to negotiations with complete union dominance. An alternative explanation involves differences in the motivation for the two sides' reliance on social comparisons. Board negotiators will care about relative wages if voters base their subsequent votes on this signal of their elected officials' competency (Besley and Case, 1995). For this explanation to be credible, it must be difficult for voters to obtain direct evidence of their official's competency and relatively easy for voters to use the voting mechanism to reward or punish the officials. Our finding that the board-only list is only important when the union is very weak suggests that these conditions may not be fully met. Voters have other mechanisms besides salaries in referent districts, such as quality of education and the level of taxes, upon which to base their evaluations of the board leadership. Union members are more likely to base their evaluations of the leadership on how their salaries stack up against those of their referents. Furthermore, union members may care a great deal about relative wages if such relative measures directly enter their utility function due to concern about equity and fairness (Frank, 1985). Therefore, the overall importance of referent outcomes is likely to be greater for unions than for boards.