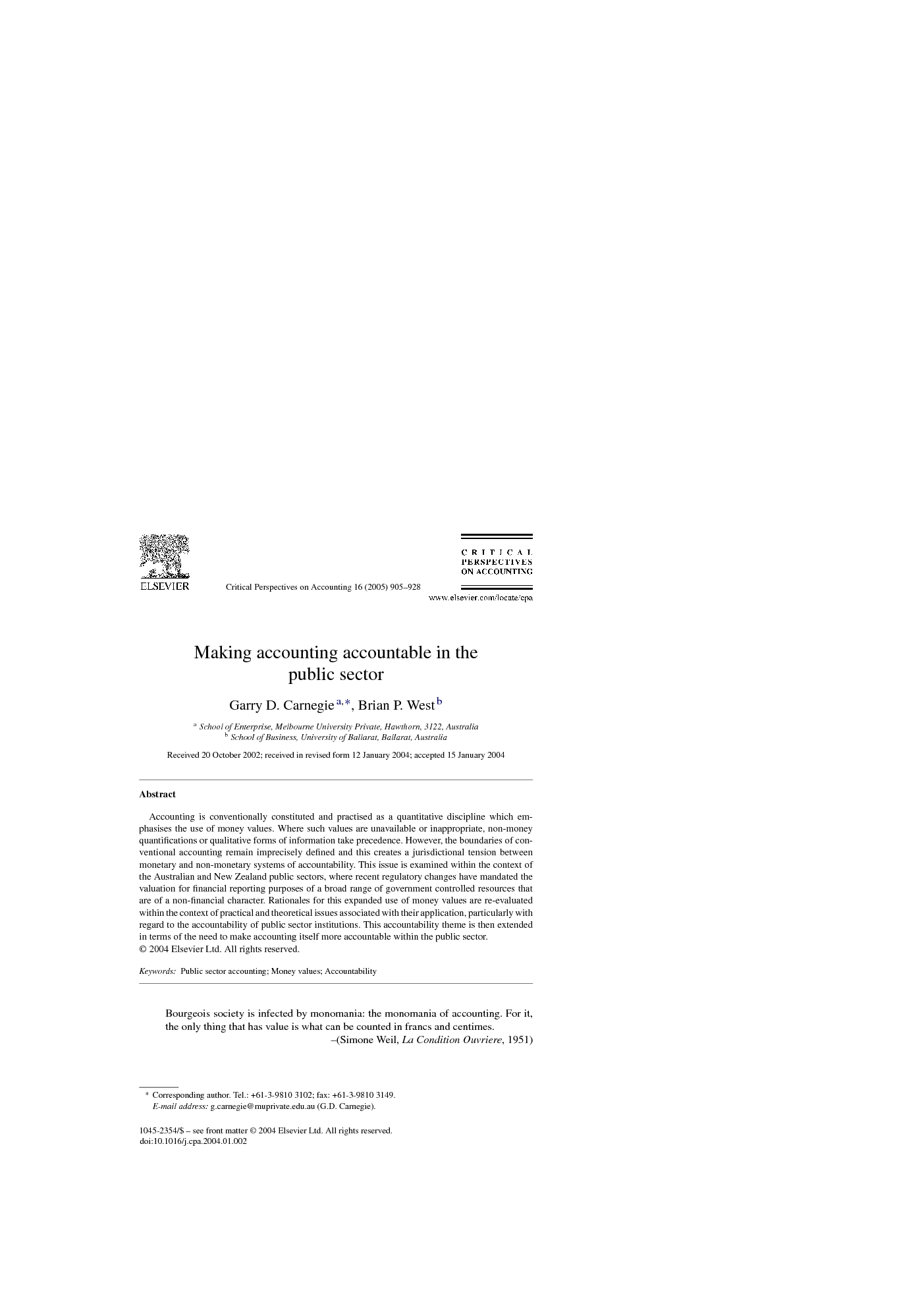 Accounting is conventionally constituted and practised as a quantitative discipline which emphasises the use of money values. Where such values are unavailable or inappropriate, non-money quantifications or qualitative forms of information take precedence. However, the boundaries of conventional accounting remain imprecisely defined and this creates a jurisdictional tension between monetary and non-monetary systems of accountability. This issue is examined within the context of the Australian and New Zealand public sectors, where recent regulatory changes have mandated the valuation for financial reporting purposes of a broad range of government controlled resources that are of a non-financial character. Rationales for this expanded use of money values are re-evaluated within the context of practical and theoretical issues associated with their application, particularly with regard to the accountability of public sector institutions. This accountability theme is then extended in terms of the need to make accounting itself more accountable within the public sector.

The purpose of this paper has been to explore two interrelated facets of accountability. The first concerns the changes to accounting practice within the Australian public sector which have had as their main distinguishing feature the full implementation of the conventional private sector system of accrual accounting and an extensive expansion of the range of public sector resources, including those of a non-financial character, which are subject to monetary valuation. It has been argued, especially in cases where key non-financial resources are to be valued for financial reporting purposes, that these reforms have failed to achieve their stated purpose of promoting enhanced mechanisms of accountability within the public sector because their almost exclusive financial focus fails to embrace the need for a much broader discourse of accountability within public sector settings. As Chua (1996, p. 151) has noted, calculative languages “take away context whether it is cultural, temporal, historical”. Yet, it is precisely such contexts that need to be to the fore in appreciating, managing and being made properly accountable for many public sector resources, such as library and museum collections. Reassigning the way in which particular resources are accounted for risks reassigning the way they are viewed and understood: Rarely, if ever, are preexisting qualities simply made more precise by being quantified. At issue, rather, is the creation of new entities, made impersonal and (in this sense) objective when widely scattered people are induced to count, measure, and calculate in the same way. –(Porter, 1996, p. 36) The second accountability theme concerns the accountability of accounting itself, especially in the post-Enron era. In particular, it has been contended that accounting regulators and professionals have a responsibility to ensure that they are accountable for the technical practices they impose. This includes assessing the implications for organisational and social functioning of applying such practices and responding on an adequate and timely basis when they are criticised. Ignoring alternative approaches to enhancing accountability within the public sector—that are proposed on the basis of their aptness within particular organisational contexts—is also not indicative of a responsive or flexible professional group. Common to both these themes is the notion that effective discourses of accountability must often embrace more than just financial data and that the value of many public sector resources—being not of a financial kind—should not be attempted to be expressed in money terms. Identifying and evaluating the impacts of such practices will assist in broadening debate on proposed accounting reforms and contribute to making accounting more accountable. Accounting, with its conventional emphasis on monetary valuation, plays a key role in enabling systems of accountability within a broad range of contexts. However, enhancing the usefulness of accounting information requires an awareness and acknowledgement of its limitations. The issue of what can and needs to be assigned money values is essential in delineating the boundaries of conventional accounting. In resolving this issue it needs to be recognised that “[a]ccounting systems should not drive policy: it should be the other way around” (Corbett, 1996, p. 139). Rather than proceed from such recognition, recent changes in public sector accounting—and in particular the process of assigning financial values to non-financial resources—appear to have been driven by an obsessive and narrow pecuniary focus: “the culture of … accounting does not seem to know half measures” (Zan et al., 2000, p. 337). Under this interpretation of the public sector, what has not been assigned a money value is presumed to be unaccounted for, unacknowledged, unappreciated, and even not yet called into being. It is an interpretation that needs to be critically analysed and then modified in order to enable broader, more apt and cost-efficient systems of accountability—emphasising the safekeeping of non-financial resources—to be adopted within the public sector, and to make accounting itself more accountable. As Nelson (1993, p. 226) notes, “When it cannot hear the distinctive voices of others, accounting ends up trying to see what others are doing, through the single-minded medium of money”. Misplaced systems of monetary valuation resulting from this single-mindedness threaten to devalue the resources to which they are applied and presage of the need for greater scrutiny of the occupational group that oversees and prescribes such practice.