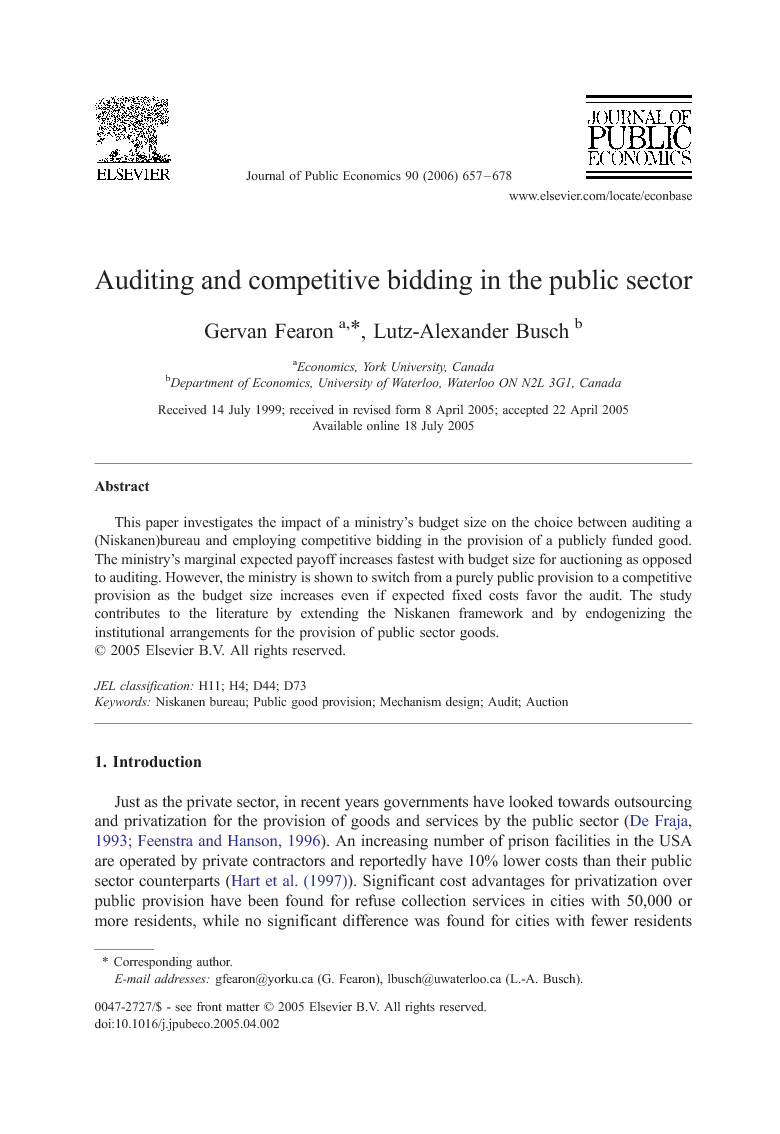 This paper investigates the impact of a ministry's budget size on the choice between auditing a (Niskanen)bureau and employing competitive bidding in the provision of a publicly funded good. The ministry's marginal expected payoff increases fastest with budget size for auctioning as opposed to auditing. However, the ministry is shown to switch from a purely public provision to a competitive provision as the budget size increases even if expected fixed costs favor the audit. The study contributes to the literature by extending the Niskanen framework and by endogenizing the institutional arrangements for the provision of public sector goods.

The paper analyses a ministry's choice in the provision of a public sector good in the presence of asymmetric information. The ministry copes with asymmetric information about provision costs by either auditing a Niskanen budget maximizing bureau, or by contracting with private firms. In the case of auditing, the penalty which can be imposed is exogenously limited, limiting the ministry's ability to extract informational rents from the bureau. In the contracting case, a second-price sealed bid auction is used in order to minimize informational rents. The paper extends the Niskanen model of government bureaucracy, and endogenizes the choice between auditing and competitive bidding in the public sector. We show that at very low budget levels it may be optimal not to invest any resources towards the reduction of informational rents, but to provide the good without any supervision. This result is consistent with the common practices of many public institutions that permit the issuance of procurement contracts to a single firm without tender when these contracts are sufficiently small. It is noteworthy that the implementation of government regulations to require the use of auctions independent of the budget level may therefore not improve welfare. For higher budget levels the optimal choice involves an attempt to limit informational rents. The approach that is best will depend on the costs associated with each and the budget size. An auction is the optimal choice independent of the size of the budget if the fixed costs for competitive bidding are low relative to those expected for auditing. If, however, the fixed costs for competitive bidding are high relative to those for auditing, the optimal choice can depend on the budget level. In that case the institutional arrangement can involve switching from public sector to private sector production as budget size increases. This is driven by the fact that auctions are the optimal way to limit informational rents, and so will ultimately outperform any other mechanism (e.g., auditing and unsupervised production) even if it has an initial cost advantage. Both auctions and audited provision may involve a reservation level of cost, above which the ministry will not fund the provision of the good. The optimal level of this reservation cost depends on the distribution of costs, as is usual for auctions and shown here for auditing. Indeed, it is the same for both procurement choices. As is common practice for public sector procurement, it is found that the auction mechanism requires more than three firms to participate. The size of government is reportedly positively correlated to overall economic activity as measured in terms of gross domestic product per capita (Alesina and Wacziarg, 1998). Holsey and Borcherding (1997) also suggest that government budget rises faster than income in the short run while its long-run income elasticity is unity (i.e., a restating of Wayne's Law). While Wayne's Law is not supported by all empirical studies, the size of government is generally found to be positively correlated to per capita income and the income of the median voter.14 It follows that the results predict that there will be growing reliance on private provision of public sector goods during periods of economic boom and expanding government budgets even when fixed costs favor auditing over auctions. Also, developed countries tend to have larger government budgets in absolute and as a percentage of GDP than developing nations. Again, if fixed costs, including the availability of technical ability, favor auditing over auctions, then it can be anticipated that the private sector will be more appropriately involved in the provision of public sector goods in developed countries as compared to developing nations. In general, the implementation of institutional arrangements in government without regard for the fixed costs of maintaining these structures or the size of the government budgetary resources may not be welfare improving. This study predicts that the government copes with information asymmetries by aiming to minimize informational rents. The optimal institutional arrangement of government is found to vary depending on the costs of each arrangement. However, in a government environment with multiple products, the allocation of fixed costs between programs is endogenous. Since it also is a significant determinant of the choice between public or private sector provision, this study suggests that the administrative rules associated with the allocation of these costs are important in predicting and determining the institutional arrangements of government. Bureaucrats can influence these fixed costs through the allocation methodology, and may therefore be instrumental in determining the fixed cost of conducting public sector auctions or public sector supervision. Hence, the institutional rules surrounding the allocation of these costs are an important determinant of the institutional arrangements established for the provision of public sector goods.