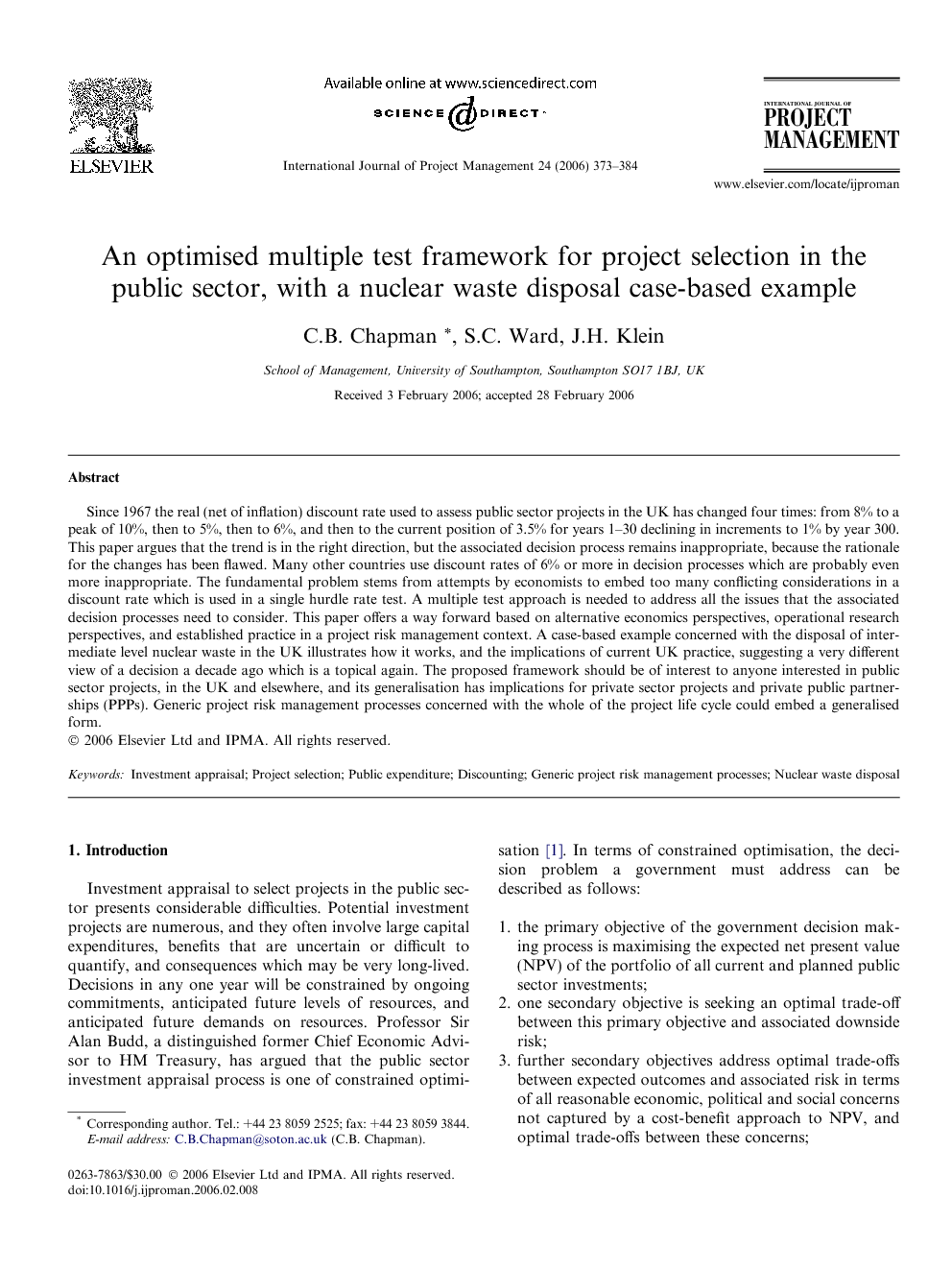 Since 1967 the real (net of inflation) discount rate used to assess public sector projects in the UK has changed four times: from 8% to a peak of 10%, then to 5%, then to 6%, and then to the current position of 3.5% for years 1–30 declining in increments to 1% by year 300. This paper argues that the trend is in the right direction, but the associated decision process remains inappropriate, because the rationale for the changes has been flawed. Many other countries use discount rates of 6% or more in decision processes which are probably even more inappropriate. The fundamental problem stems from attempts by economists to embed too many conflicting considerations in a discount rate which is used in a single hurdle rate test. A multiple test approach is needed to address all the issues that the associated decision processes need to consider. This paper offers a way forward based on alternative economics perspectives, operational research perspectives, and established practice in a project risk management context. A case-based example concerned with the disposal of intermediate level nuclear waste in the UK illustrates how it works, and the implications of current UK practice, suggesting a very different view of a decision a decade ago which is a topical again. The proposed framework should be of interest to anyone interested in public sector projects, in the UK and elsewhere, and its generalisation has implications for private sector projects and private public partnerships (PPPs). Generic project risk management processes concerned with the whole of the project life cycle could embed a generalised form.

Discussion of investment appraisal approaches which underlie project selection are traditionally dominated by arguments about a ‘correct’ discount rate assuming only one rate will be used in a simplistic decision process which uses a single hurdle discount rate test. Each school of thought attempts to determine an appropriate discount rate by considering a subset of the issues, but, as Baumol put it, ‘no one discount rate will deal with all the issues’[15]. HM Treasury have moved to a discount rate which is so low it has become self-evident further tests are needed. However, they have chosen a basis for their discount rate which involves STPR issues, which should not be in the discount rate, ignoring ACC considerations in the process. Further, they have not considered the SOC or risk issues appropriately. Further still, they have not directly considered optimising the portfolio of projects selected or optimising the effort involved in the selection process. A constructively simple approach is concerned with optimisation at both levels, in a framework which keeps the practice as simple as possible. The authors’ position is that the discount rate should be defined by the actual cost of capital, with an ACC approach used as the basis of the bond test, the basic financing test. All other issues need separate tests which do not operate via the discount rate. A simple sequence of separate tests will be effective for most projects, provided the issues are not too complex and the choices are reasonably obvious. Marginal choices and complex choices will require simultaneous consideration in a more complex review process. The authors have no doubt that many of their suggestions can be improved upon, and some of the assumptions used in this paper may be successfully challenged. However, the authors believe the basic framework proposed is a sound way forward. It should yield the benefits of low discount rates that the sustainability lobby have quite properly been seeking (via STPR approaches), but also meet the concerns of the SOC lobby, who quite properly wish to see a favourable return on rationed public investment. It should allow risk to be addressed properly. It should facilitate simple tests for simple projects, and complex analysis in a portfolio framework for complex issues like UK energy policy. It should make political priorities operational in a transparent manner. It should do all this in a framework that non-economists can understand, allowing them to contribute to the key process decisions and the key trade-off decisions. Further, it should generalise to private sector and PPP projects, and this should facilitate comparison of alternative approaches to funding some projects and organisations.