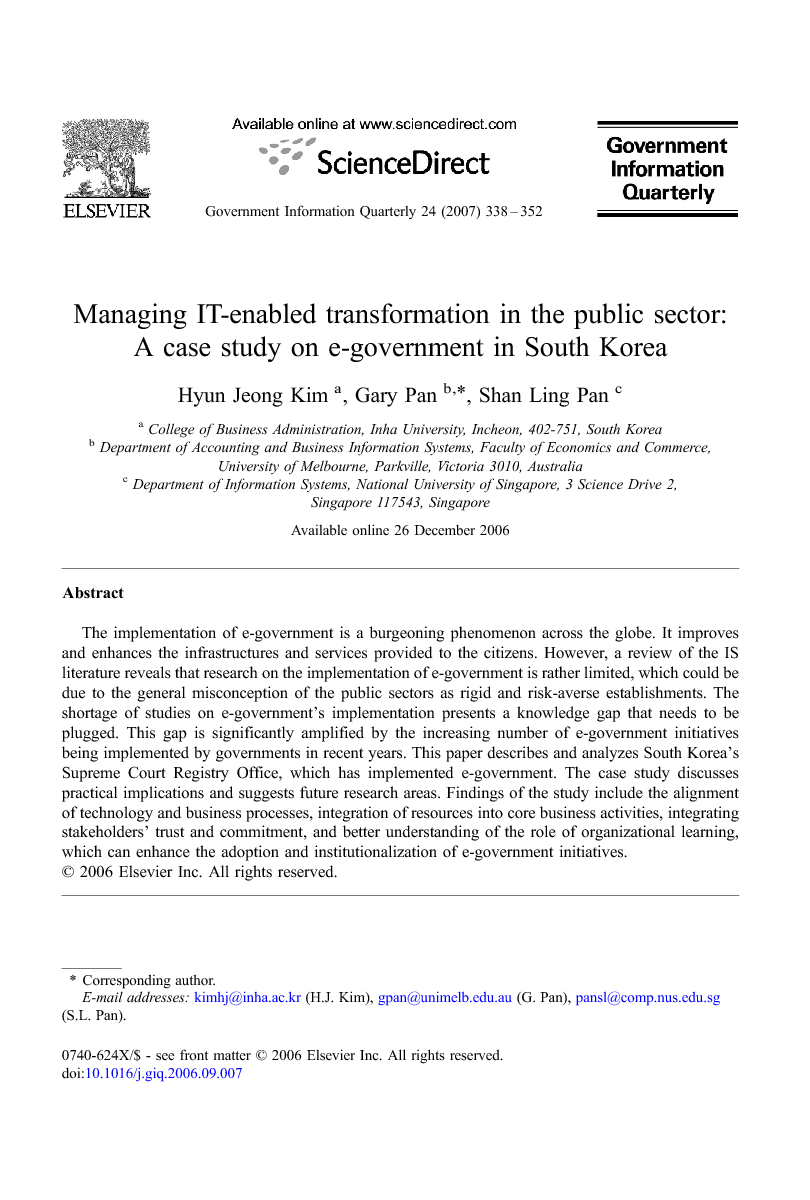 The implementation of e-government is a burgeoning phenomenon across the globe. It improves and enhances the infrastructures and services provided to the citizens. However, a review of the IS literature reveals that research on the implementation of e-government is rather limited, which could be due to the general misconception of the public sectors as rigid and risk-averse establishments. The shortage of studies on e-government’s implementation presents a knowledge gap that needs to be plugged. This gap is significantly amplified by the increasing number of e-government initiatives being implemented by governments in recent years. This paper describes and analyzes South Korea’s Supreme Court Registry Office, which has implemented e-government. The case study discusses practical implications and suggests future research areas. Findings of the study include the alignment of technology and business processes, integration of resources into core business activities, integrating stakeholders’ trust and commitment, and better understanding of the role of organizational learning, which can enhance the adoption and institutionalization of e-government initiatives.

Electronic government (e-government) is the term for the technology-enabled transformation of governments: for the reduction of costs, for the increase of transparency, and for the improvement on service delivery and public administration (Irani, Love, & Montazemi, 2006). E-government encompasses three modalities: (1) government to citizen, whereby the citizens access government information and services online; (2) government to business, which allows online interaction between government and the private sector; and (3) government to government, depending on various levels of governmental agencies, to deliver services and allocate responsibilities (Moon, 2002). According to the Accenture (2004) report, the adoption of e-government can bring economic benefits by improving the business environment of the private sector and attracting direct foreign investment. Such potential benefits have led many countries to initiate e-government projects in recent years (World Bank, 2006). As a result, the implementation of e-government burgeons across the globe, with substantial investment made to give enhancement to infrastructures as well as services to citizens (Ebrahim & Irani, 2005). Despite their tremendous potential, e-government projects carry considerable risks of implementation failure (Kawalek & Wastell, 2005). For example, overly ambitious project scale and scope (Beynon-Davies, 1995), lack of political will to transform government functioning, and inadequate capacity to design and implement solutions are possible reasons for implementation failure (Pan, Pan, Newman, & Flynn, 2006). Therefore, the conceptualization of the underlying dynamics and processes of e-government implementations is clearly desired. This paper describes an in-depth case research that analyses the implementation process of the e-government project at Supreme Court Registry Office (SCRO) in South Korea. The study examines the major events and actions taken to facilitate the e-government implementation process. The remainder of the paper is organized as follows: we first review past research on managing information technology (IT)-enabled organizational transformation and e-government initiatives, present Cooper and Zmud’s (1990) Technology Diffusion Model, which was used as an analytical framework for this study, and describe and analyze the SCRO case. We conclude by highlighting the implications of our study for both research and practice and by suggesting future research.

This paper describes and analyzes the experience of the implementation of e-government at the Supreme Court Registry Office in South Korea. The inherent limitation of a single case study notwithstanding, this study has offered insights into the transformational experience of SCRO from an inefficient governmental agency to an improved public sector organization which provides efficient public services. The study adopts interviews and documentations as the key data collection instruments and explores a diversity of implementation issues within the e-government initiative. The findings of the SCRO, as presented, provide major research and practical implications. For researchers, this paper makes a contribution by providing a processual perspective on the way an e-government project is implemented in a public sector organization. Though previous studies have identified several IT-enabled organizational transformational efforts, little is known about the actual implementation practice of e-government projects by governments—an area which deserves much more attention (Irani et al., 2006) as several governments race to adopt technology as powerful means to enable and aid transformation in their organizations (World Bank, 2006). Furthermore, this study also makes a novel contribution to e-government literature by extending existing knowledge based on the application of the Cooper and Zmud’s (1990) model as an analytical framework in an e-government context. We believe that the model offers a vocabulary for framing experiences and learning of potential e-government initiatives. The case data in this study, their alignment with our proposed model (i.e., Cooper & Zmud, 1990), help to demonstrate the analytical capability of the model. However, future research should seek to formulate more generalizable explanations as to why certain sequences lead to certain outcomes, or more specifically, why certain interventions during the six stages of IT diffusion, lead either to success or failure. An interesting avenue for future research is to attempt to contextualize the framework using a case study or even multiple case studies which could perhaps provide stronger analytical power. In addition, we believe that the findings from this study could be validated in other cultural contexts. One direction for future research would be to replicate this study across various disparate cultures. For example, while South Korea is on the low end of Hofstedt’s (1991) uncertainty avoidance index, Western cultures such as the United Kingdom, is at the higher end. According to an earlier IT project implementation study (i.e., Keil et al., 2000), the level of uncertainty avoidance affects how projects are implemented, in particular, how project managers perceive project risk. Thus, an obvious extension of the study is to replicate this study in high uncertainty avoidance cultures to determine whether the results obtained in South Korea still hold. For practitioners, this study is important because an e-government implementation is likely to involve many phases. Understanding these key stages is essential for managing the e-government initiative. Furthermore, managers should not confine the involvement of stakeholders to only the design and development phases. Engaging stakeholders after system rollout would enable managers to correctly assess stakeholders’ overall acceptance of the system, and the feedback gathered could form the basis of continual improvement to the system. For this reason, it is important to have sufficient and effective means of communication between various stakeholders. Finally, regardless to how successfully a public sector organization is transformed, it is important to continue to generate an effective learning environment, as individual organizational member feels comfortable with new knowledge to be put into practice. By following the various stages of e-government implementation, this study highlights the importance of technology as an enabling mechanism that incorporates and revolves around many organizational issues. This recognition not only stresses the importance of choosing the best strategy for deciding what particular IT to adopt, but it also underlines the need to take into account organizational issues from the start of the implementation. Finally in this paper, we have used only retrospective data. There is a lack of real-time longitudinal data that directly examines the other considerations made during the implementation process. Future research could perhaps attempt to address this gap so as to unravel new issues surrounding the e-government implementation process.