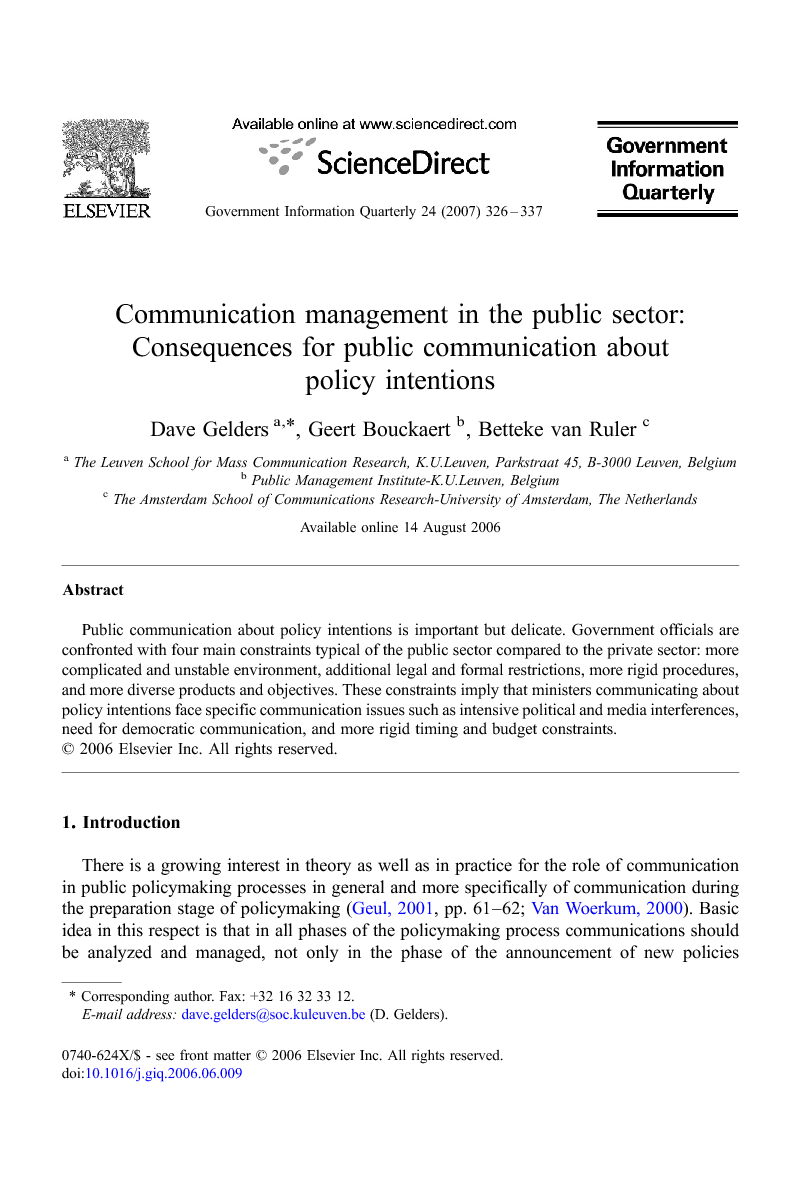 There is a growing interest in theory as well as in practice for the role of communication in public policymaking processes in general and more specifically of communication during the preparation stage of policymaking (Geul, 2001, pp. 61–62; Van Woerkum, 2000). Basic idea in this respect is that in all phases of the policymaking process communications should be analyzed and managed, not only in the phase of the announcement of new policies (Damoiseaux & Van Ruler, 1998, p. 14). This means that communication needs also to be managed in the preparation stage of policymaking, e.g., that it needs to be steered on the basis of certain ends and towards certain outcomes (Van Ruler, Elving, Van den Hooff, Smit & Piet, 2005, p. 16). The problem is that the theoretical framework regarding communication management in this phase of policymaking is still in its infancy and that most approaches keep working with a concept of communication as information transfer or as a sender who tries to persuade a receiver (Van Ruler & Verčič, 2005). Moreover, the available theory is mainly developed within the context of the private sector (Van Harberden & Van Oest, 1997, p. 120; for an overview of theories for the private sector, see Grunig, 1992, Grunig et al., 2002 and Heath, 2006). Consequently, the question arises if and to what extent management models from the private sector are transferable to the public sector, and if so, what the consequences are for public communication management. There is extensive literature available discussing the question to what extent management models from the private sector are transferable to public sector especially as a consequence of the New Public Management (NPM). This question has not been unequivocally answered. The topic is delicate because it questions basic principles of modern management science (the idea that management has general characteristics) and even questions the usefulness of public organizations (Desmidt & Heene, 2005, p. 70). We share Thijs' view stating that transferring models and techniques from the private sector to the public sector is partly possible as far as one takes the specific characteristics of the public sector into account as well as the determining elements of the environment (Thijs, 2004). So, if we use the theories developed in the private sector, we then have to consider the consequences for public communication management. Relatively recent definitions of public information provisions (e.g. Seydel cited by De Roon, 1993, p. 54) as well as other publications cite a planned approach of the public information provision. However, this is often limited to a reference to some kind of ‘communication model split into phases’, as is argued by De Roon (1993). The organizational context of the public communication is scarcely considered. Some exceptions include publications by Garnett (1992) and Graber (2003). Rainey, Backoff, and Levine (1976) as well as Ring and Perry (1985) present a comprehensive overview of factors and properties that determine, according to them, the unique character of public organizations. As Rainey, Backoff, and Levine state, they devised this list by (internal) consensus. Thus, the list is not grounded by extensive empirical study on each statement. This article fits into a broader research agenda of analyzing and comparing the public and private sector, their reforms and the implications on the management of the global communication from and within these public and private organizations, and to the management of specific communication modalities, such as policy communication, crisis communication, service delivery communication, internal/external communication, etc. Fig. 1 represents the general question of our long-term research project.The private sector and public sector are characterized by some differences and similarities (see Relation 1). Both sectors have changed the last decade (see Relations 3 and 4) due to reforms that were internally or externally generated (e.g. New Public Management). These changes are broadly studied by public administration scholars. The question arises to what extent the current private and public sector still differ (see Relation 2), to what extent a new kind of communication within both sectors developed due to the reforms and vice versa, and finally to what extent the new communication differs between both the private and public sector. There are many indications that the internal (organizational) and external communication have developed in several kind of relationships between different actors (see Fig. 2).Fig. 2 shows two unfolded triangles, based on the actors: Executive Power, Legislative Power, Public Administration, and Citizen. Examples in the public and private sector indicate that communication has become increasingly important in the several relationships, e.g., organizing hearings (Executive–Legislative), yearly ombudsman reports (Legislative–Citizen), charters (Public Administration–Citizen), rewards, performance agreements (Executive–Public Administration), etc. For each arrow in the figures mentioned above, empirical research will be conducted to answer the questions mentioned above (using expertise from information/communication sciences on the one hand, and from the public administration on the other). This article is a first initiative to map the differences and similarities between the traditional private and public sector (see Relation 1 in Fig. 1). Our hypothesis is that each sector is characterized by specific communication, and vice versa. But this has not yet been studied. We study the implications of the specific public sector to one specific kind of communication, i.e., public communication about policy intentions. Thus, we focus on Relation 1 and on the corresponding box public sector. Summarizing, we now deal with the major differences between the public and the private sector as well as the consequences of using theories from the private sector for public communication about policy intentions (e.g. public communication from ministers or the government about policies that have still to be adopted by another authority such as the government or the Parliament). While describing the differences between the public and private sector, we mention if they are empirically grounded and we present the consequences for public communication about policy intentions. We focus on the following key elements of the public sector (compared to the private sector): - more complicated, unstable environment; - additional legal and formal constraints; - more rigid procedures; and - more diverse products and objectives.

In this article we described the most important differences between the public and the private sector, differences that we consider to be relevant for understanding the constraints and opportunities of managing public communication from politicians about policy intentions. There is a lot of literature about the differences between the public and private sector, but not on the implications of communication within such context. This article aimed at stressing key differences focusing on a kind of public communication, i.e., communication about policies not yet adopted by other authorities. Such communication is important, but it is also delicate as a result of the more complicated, unstable environment of the public sector and its political influences. The statutory characteristics of government operations result in so-called semi-products that governments communicate about. An important difference between the public and private sector is that the public organizations not only strive for efficiency but also for democratic values. These two concepts may be conflicting. For example, if no mass communicative public information (leaflets, newspaper ads) are allowed to be disseminated during the stage ministers communicate about policies that are not yet adopted by Parliament, this can hinder the policy implementation. However, efficiency and democracy are not always contradictory. Public communication about policy intentions is not obvious due to the greater organizational rigidity in the public sector: the relatively strict timing and budgeting of public communication is hard to fit in the often capricious political policymaking process. Nowadays public communication is much more than transferring information or persuading receivers. It is more and more a tool that several actors use creating meaning in policymaking processes. One can speak of a transition from “meaning of management” to “management of meaning”. The basic idea of this article was that public communication about policy intentions should be analyzed and managed, but this is a delicate issue. Government officials are confronted with four main constraints as discussed in this article: (a) more complicated and unstable environment of the public sector; (b) additional legal and formal restrictions; (c) more rigid procedures; and (d) more diverse products and objectives. An important element in research and practice of public administrations is the recent transition towards a market-driven mode of governance (“from government to governance”). As Haque (2001) extensively describes, this creates a serious challenge to “publicness” of a public organization. In particular, the current businesslike changes in goals, structures, functions, norms, and users of public goods and services tend to diminish its publicness; see, e.g., eroding public–private distinctions (“public private partnerships”), shrinking socioeconomic role, narrowing composition of service recipients, worsening condition of accountability, and declining level of public trust (see also Roberts, 2000). It is worth noting that public companies have to distribute commercially neutral products and are to be reserved in societal debates as they are expected to support the policy of their supervising government.