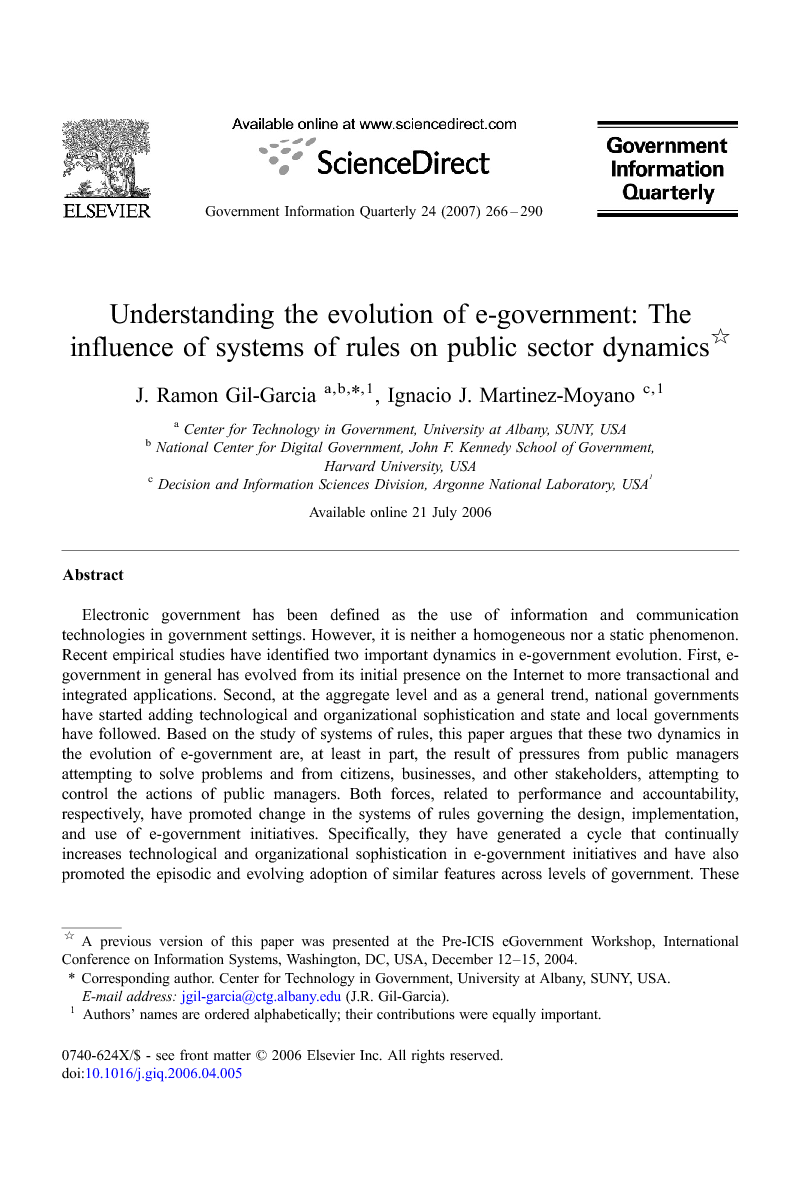 Electronic government has been defined as the use of information and communication technologies in government settings. However, it is neither a homogeneous nor a static phenomenon. Recent empirical studies have identified two important dynamics in e-government evolution. First, e-government in general has evolved from its initial presence on the Internet to more transactional and integrated applications. Second, at the aggregate level and as a general trend, national governments have started adding technological and organizational sophistication and state and local governments have followed. Based on the study of systems of rules, this paper argues that these two dynamics in the evolution of e-government are, at least in part, the result of pressures from public managers attempting to solve problems and from citizens, businesses, and other stakeholders, attempting to control the actions of public managers. Both forces, related to performance and accountability, respectively, have promoted change in the systems of rules governing the design, implementation, and use of e-government initiatives. Specifically, they have generated a cycle that continually increases technological and organizational sophistication in e-government initiatives and have also promoted the episodic and evolving adoption of similar features across levels of government. These two related evolutionary dynamics and the characterization of e-government as systems of rules and standards have some important policy implications, which are briefly discussed at the end of the paper.

Governments are increasingly using information and communication technologies in their daily operations and businesses. As a consequence, the study of e-government has increased in recent years and researchers are developing theoretical and conceptual models to understand different aspects of e-government (see for example Cresswell and Pardo, 2001, Dawes et al., 2004, Fountain, 2001, Gil-García and Pardo, 2005, Gupta and Jana, 2003 and Moon, 2002). An important portion of the emergent literature attempts to conceptualize or characterize electronic government and these articles can be classified in three broad approaches: (1) definitional, (2) evolutionary, and (3) stakeholder-oriented (Gil-García and Luna-Reyes, 2003 and Schelin, 2003). This paper focuses on the evolutionary approach, which describes the stages of e-government in terms of their degree of technological and organizational sophistication (Gil-García and Luna-Reyes, 2003, Moon, 2002 and Schelin, 2003). Within this evolutionary approach, several studies have been developed, but their scope is mainly descriptive. In order to explain how and why this evolution has taken place, more analytical research and sound theoretical frameworks are needed. This paper proposes a theory of e-government evolution as a result of important dynamics found in the way in which systems of rules interact with action in organizational settings. This theoretical framework poses a link between how public managers decide on e-government initiatives and how businesses, citizens, and other stakeholders involved in the policy process internalize those decisions and subsequently influence them over time. In the context of e-government evolution, we use institutional theory and the study of rules as sources of change (Feldman, 2000) to reframe the well-established politics-and-administration dilemma (Wilson, 1887). Our theory explains that, at the aggregate level, e-government has been adding more technological and organizational sophistication as a result of both institutional isomorphism (La Porte, Demchak, & Friis, 2001) and pressures from businesses, citizens, politicians, interest groups, and other stakeholders (Kuk, 2003, Reddick, 2004 and Salem, 2003). In addition, e-government initiatives are evolving from the national to the local level (West, 2005). If local governments are more responsive to citizens' needs, as some devolution scholars argue, the situation described above may imply a change from self-imposed initiatives searching for solutions (administration performance), to externally imposed requirements by businesses, citizens, and other stakeholders (politics accountability). This paper is organized in seven sections including these introductory comments. Section 2 describes two dynamics of e-government evolution. First, there is a constant addition of technological sophistication, interaction capabilities, and business rules. This dynamic has been framed as e-government stages from presence to transaction to integration. Second, the evolution according to these stages has not been equal at all levels of government. In fact, there seems to be a trend from the national level to state and local governments. Section 3 introduces basic concepts about the study of rules and rule evolution. In Section 4, it is shown how systems of rules can be designed mainly to address problems (performance) or to exercise control (accountability). These two dimensions are not mutually exclusive and all rule systems, including e-government, represent certain degree of both solution-guiding and behavior-constraining dimensions. Section 5 integrates the bi-dimensional framework of systems of rules with some of the complexities of government settings. Specifically, this section addresses the issue of multiple stakeholders and therefore multiple designers of rule systems in the public sector. It also provides some examples of how this framework works for e-government initiatives. In Section 6, the politics and administration dilemma is revisited and framed in terms of performance, accountability, and the bi-dimensional framework of systems of rules. This framing is exemplified by analyzing the second dynamic of e-government evolution and hypothesizing some potential implications. Finally, Section 7 discusses other implications of the theoretical model and suggests avenues for future research.