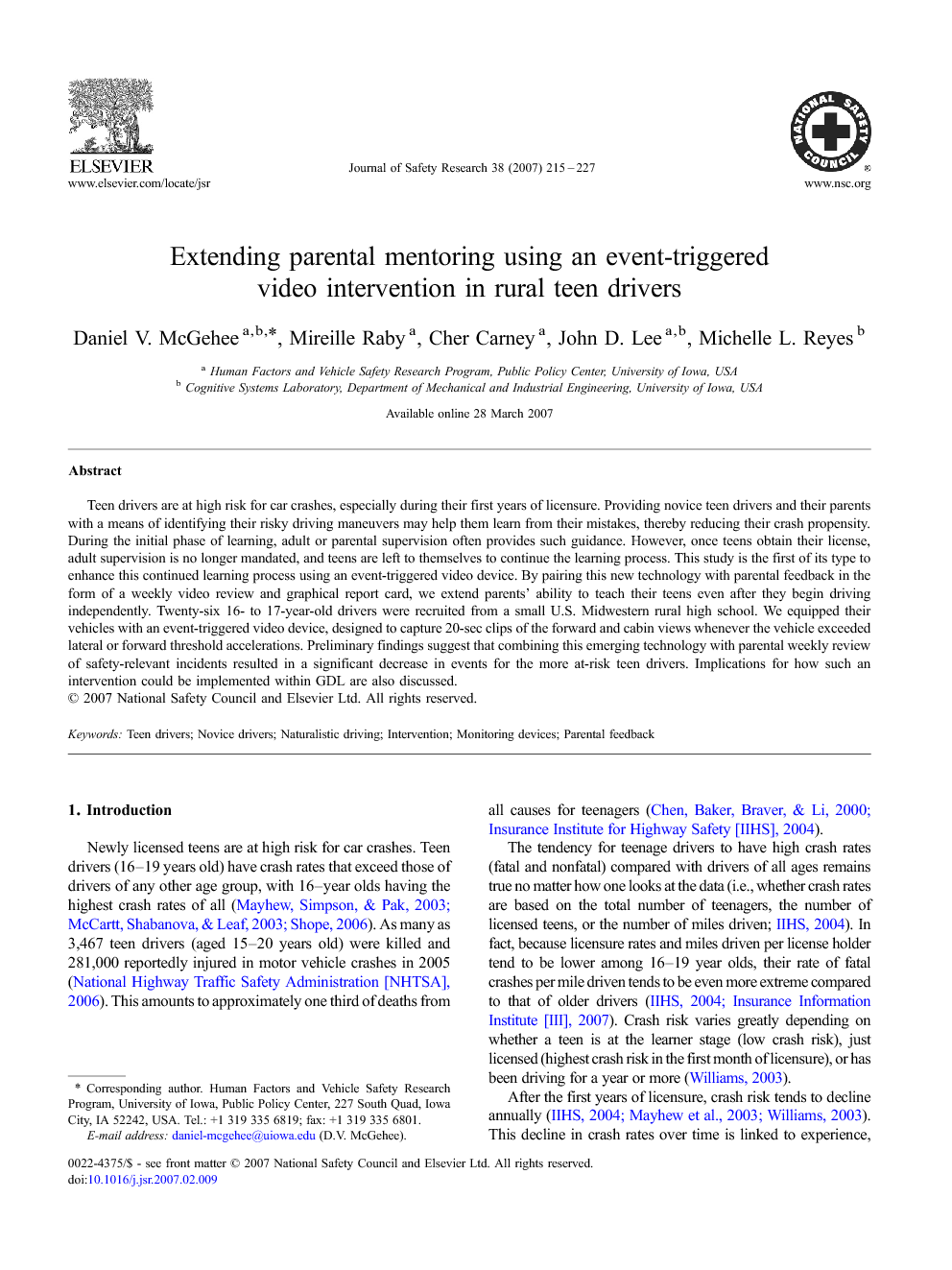 Teen drivers are at high risk for car crashes, especially during their first years of licensure. Providing novice teen drivers and their parents with a means of identifying their risky driving maneuvers may help them learn from their mistakes, thereby reducing their crash propensity. During the initial phase of learning, adult or parental supervision often provides such guidance. However, once teens obtain their license, adult supervision is no longer mandated, and teens are left to themselves to continue the learning process. This study is the first of its type to enhance this continued learning process using an event-triggered video device. By pairing this new technology with parental feedback in the form of a weekly video review and graphical report card, we extend parents' ability to teach their teens even after they begin driving independently. Twenty-six 16- to 17-year-old drivers were recruited from a small U.S. Midwestern rural high school. We equipped their vehicles with an event-triggered video device, designed to capture 20-sec clips of the forward and cabin views whenever the vehicle exceeded lateral or forward threshold accelerations. Preliminary findings suggest that combining this emerging technology with parental weekly review of safety-relevant incidents resulted in a significant decrease in events for the more at-risk teen drivers. Implications for how such an intervention could be implemented within GDL are also discussed.

Newly licensed teens are at high risk for car crashes. Teen drivers (16–19 years old) have crash rates that exceed those of drivers of any other age group, with 16–year olds having the highest crash rates of all (Mayhew et al., 2003, McCartt et al., 2003 and Shope, 2006). As many as 3,467 teen drivers (aged 15–20 years old) were killed and 281,000 reportedly injured in motor vehicle crashes in 2005 (National Highway Traffic Safety Administration [NHTSA], 2006). This amounts to approximately one third of deaths from all causes for teenagers (Chen et al., 2000 and Insurance Institute for Highway Safety [IIHS], 2004). The tendency for teenage drivers to have high crash rates (fatal and nonfatal) compared with drivers of all ages remains true no matter how one looks at the data (i.e., whether crash rates are based on the total number of teenagers, the number of licensed teens, or the number of miles driven; IIHS, 2004). In fact, because licensure rates and miles driven per license holder tend to be lower among 16–19 year olds, their rate of fatal crashes per mile driven tends to be even more extreme compared to that of older drivers (Insurance Institute for Highway Safety [IIHS], 2004 and Insurance Information Institute [III], 2007). Crash risk varies greatly depending on whether a teen is at the learner stage (low crash risk), just licensed (highest crash risk in the first month of licensure), or has been driving for a year or more (Williams, 2003). After the first years of licensure, crash risk tends to decline annually (Insurance Institute for Highway Safety [IIHS], 2004, Mayhew et al., 2003 and Williams, 2003). This decline in crash rates over time is linked to experience, maturation, or a combination of these two factors (Mayhew et al., 2003). Mayhew and colleagues (2003) investigated these issues in a study where they examined changes in collision rates during the first 24 months of driving. Consistent with other research, they observed a strong effect for age-related factors; 16- to 19-year-old novice drivers maintained a consistently higher crash rate (almost twice as high) as older (20+) novice drivers with the same amount of driving experience over the 24-month period after licensure. They also obtained a clear effect of experience-related factors on crash rates for both young and older novice drivers. Crash rates declined the most during the initial 7 months of driving, with 16- to 19-year-old novice drivers reducing their crash rate by as much as 42% during this short period of time. Finally, their data suggest that at any age, crash rates for novice drivers decrease as drivers accumulate driving experience. However, younger drivers show a more significant decline than their counterparts, especially during their first year after licensure

This research shows that an event-triggered video system, paired with feedback in the form of a weekly graphical report card and video review, can reduce unsafe driving behaviors when reviewed by teens and their parents. These results suggest that incorporating both the video and parental involvement in driver training can significantly reduce the number of unsafe driving events of newly licensed teens. This feedback may help teen drivers, particularly those who experience a large number of incidents, become aware of their unsafe driving behaviors and improve their driving.