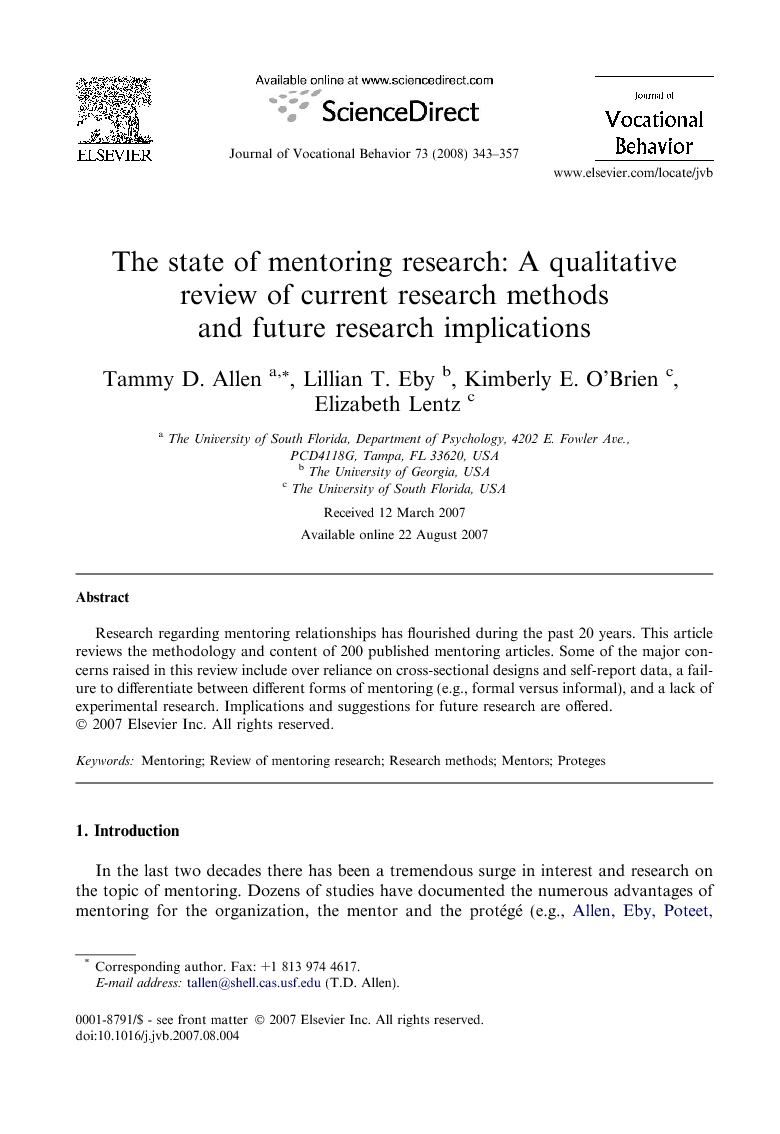 Research regarding mentoring relationships has flourished during the past 20 years. This article reviews the methodology and content of 200 published mentoring articles. Some of the major concerns raised in this review include over reliance on cross-sectional designs and self-report data, a failure to differentiate between different forms of mentoring (e.g., formal versus informal), and a lack of experimental research. Implications and suggestions for future research are offered.

In the last two decades there has been a tremendous surge in interest and research on the topic of mentoring. Dozens of studies have documented the numerous advantages of mentoring for the organization, the mentor and the protégé (e.g., Allen et al., 2004, Allen and O’Brien, 2006, Kram, 1985 and Scandura, 1992). Although a substantial body of research has accumulated, as an area of scientific inquiry, workplace mentoring is a relatively new focus of study. As noted by Reichers and Schneider (1990) in their stage model describing the pattern by which new concepts are advanced, critical review and summarization of existing literature plays a key role in the evolution of concepts. Only recently have such qualitative (Noe et al., 2002, Ragins, 1999a and Wanberg et al., 2003) and quantitative (Allen et al., 2004) reviews of the mentoring literature appeared. In addition to summarizing content knowledge concerning what we know about mentoring such as protégé career outcomes (Allen et al., 2004) or the role of gender in mentoring relationships (Ragins, 1999a), existing reviews have been critical of various methodological issues associated with mentoring research. For instance, a methodological review of diversity and mentoring relationships underscored several research and design considerations (Ragins, 1999b). Some of the major concerns raised included over-reliance on cross-sectional designs and self-report data, a failure to differentiate between different forms of mentoring (e.g., formal versus informal), lack of dyadic data, and the use of psychometrically questionable measures. Given the frequency with which methodological concerns are highlighted by mentoring scholars, a systematic methodological review of the mentoring literature seems warranted. A body of research is often judged in terms of the methodology utilized. Thus, it is important to review the methods that have been employed in order for an area of research to progress rather than stagnate (Casper et al., 2007 and Scandura and Williams, 2000). A focus on methodology within the mentoring literature is critical at this point because methodological choices influence both the breadth and depth of what we know about these important organizational relationships. For example, mentoring relationships progress through distinct stages over time marked by unique issues and challenges (Kram, 1985). As such, longitudinal research strategies are essential to fully appreciate the dynamic nature of mentoring. Mentoring relationships are also inherently dyadic and the failure to consider both partners’ perspective greatly limits our understanding of mentoring (Eby, Rhodes, & Allen, 2007). Unambiguously defining and operationalizing mentoring is also vital given the differences that have been found between formal and informal mentorships (cf. Wanberg et al., 2003). Finally, as with any area of research, the failure to use content and construct valid measures leads to serious threats validity and interpretive problems (Cook & Campbell, 1979). To help facilitate the progressive theoretical development of the construct of mentoring, a comprehensive review of the organizational mentoring literature was conducted. Although methodology is the primary focus of our review we also examine some substantive issues, such as how frequently various content domains have been examined and the types of mentoring relationships studied by researchers. The present review proceeded with two specific objectives in mind. First, we wanted to summarize the current state of mentoring research and pinpoint the most pressing methodological concerns given the nature of the mentoring construct. This will allow us to make methodological recommendations that will extend our understanding of organizational mentoring. Second, the methodological features of existing mentoring research are juxtaposed against the findings from several reviews of organizational and management research in general (Aldag and Stearns, 1988, Scandura and Williams, 2000, Schriescheim et al., 1993 and Stone-Romero et al., 1995) and the work-family literature in particular (Casper et al., 2007). This provides a frame-of-reference for evaluating the state of mentoring research. Accomplishing these two objectives will help advance mentoring scholarship in important new directions.