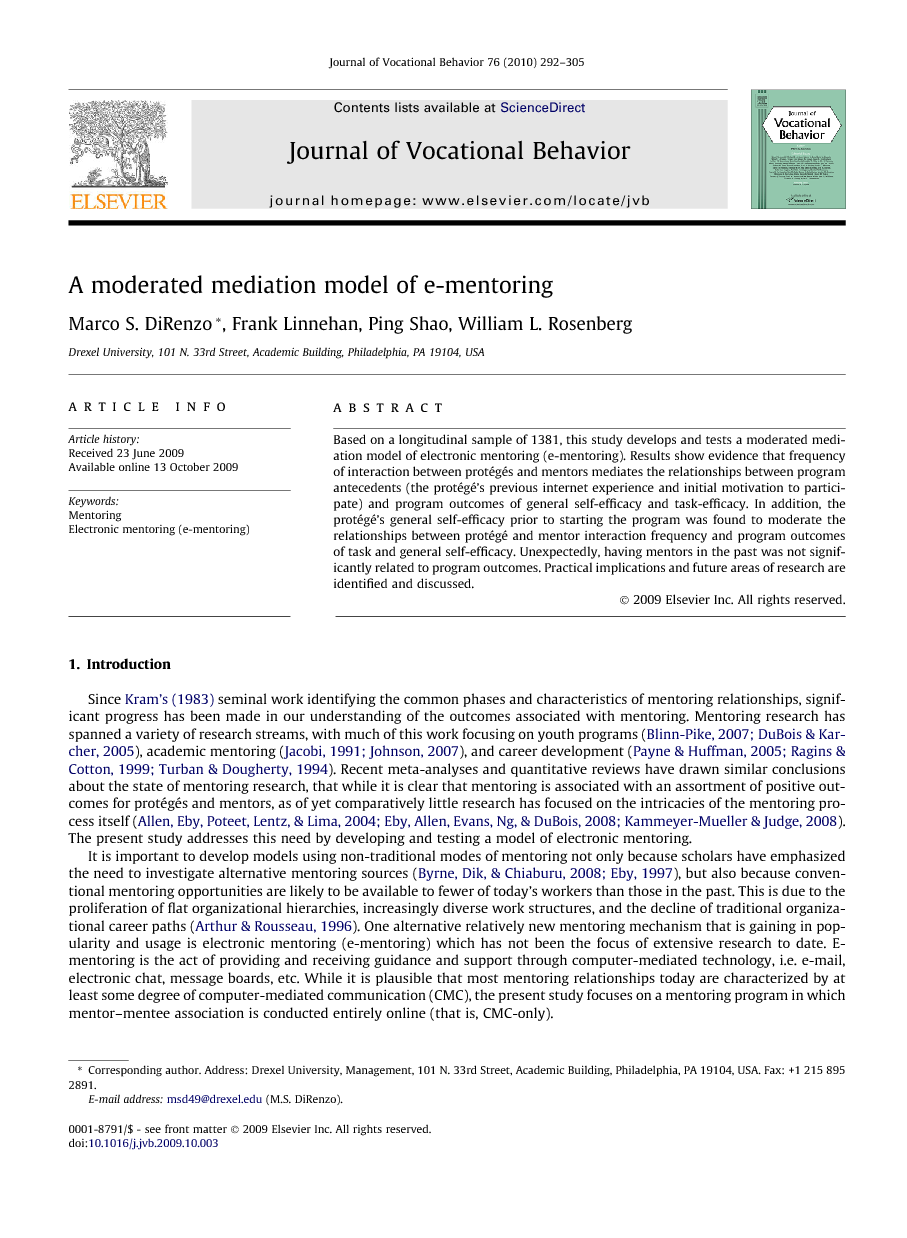 Based on a longitudinal sample of 1381, this study develops and tests a moderated mediation model of electronic mentoring (e-mentoring). Results show evidence that frequency of interaction between protégés and mentors mediates the relationships between program antecedents (the protégé’s previous internet experience and initial motivation to participate) and program outcomes of general self-efficacy and task-efficacy. In addition, the protégé’s general self-efficacy prior to starting the program was found to moderate the relationships between protégé and mentor interaction frequency and program outcomes of task and general self-efficacy. Unexpectedly, having mentors in the past was not significantly related to program outcomes. Practical implications and future areas of research are identified and discussed

Since Kram’s (1983) seminal work identifying the common phases and characteristics of mentoring relationships, significant progress has been made in our understanding of the outcomes associated with mentoring. Mentoring research has spanned a variety of research streams, with much of this work focusing on youth programs (Blinn-Pike, 2007 and DuBois and Karcher, 2005), academic mentoring (Jacobi, 1991 and Johnson, 2007), and career development (Payne and Huffman, 2005, Ragins et al., 1999 and Turban and Dougherty, 1994). Recent meta-analyses and quantitative reviews have drawn similar conclusions about the state of mentoring research, that while it is clear that mentoring is associated with an assortment of positive outcomes for protégés and mentors, as of yet comparatively little research has focused on the intricacies of the mentoring process itself (Allen et al., 2004, Eby et al., 2008 and Kammeyer-Mueller and Judge, 2008). The present study addresses this need by developing and testing a model of electronic mentoring. It is important to develop models using non-traditional modes of mentoring not only because scholars have emphasized the need to investigate alternative mentoring sources (Byrne et al., 2008 and Eby, 1997), but also because conventional mentoring opportunities are likely to be available to fewer of today’s workers than those in the past. This is due to the proliferation of flat organizational hierarchies, increasingly diverse work structures, and the decline of traditional organizational career paths (Arthur & Rousseau, 1996). One alternative relatively new mentoring mechanism that is gaining in popularity and usage is electronic mentoring (e-mentoring) which has not been the focus of extensive research to date. E-mentoring is the act of providing and receiving guidance and support through computer-mediated technology, i.e. e-mail, electronic chat, message boards, etc. While it is plausible that most mentoring relationships today are characterized by at least some degree of computer-mediated communication (CMC), the present study focuses on a mentoring program in which mentor–mentee association is conducted entirely online (that is, CMC-only).

Our study closes the gaps in the literature by responding to Ensher et al.’s (2003) call for empirical research that investigates the mentoring process in a CMC-only context. In particular, we developed and tested a moderated mediation model that simultaneously examines the mediating role of protégé–mentor interaction frequency during in the e-mentoring process and the moderating influence of self-efficacy on that role. In so doing, we have extended our understanding of mentoring processes to the electronic context while also extending our models to include the individual differences that may affect mentoring functions. Our study provides empirical support that pre-program experiences and attitudes are positively associated with protégé–mentor interaction frequency, which in turn mediates their effect on positive mentoring outcomes. We also found that self-efficacy moderates the positive influence of frequent mentor–protégé contact. Individuals with comparatively low levels of pre-program self-efficacy experienced greater increases in both general and task-efficacies as a result of frequent online contact than did those with higher initial levels. As such, we encourage future research to take an integrative analytical approach to future mentoring research and to continue to further our knowledge of mentoring processes within the e-context.