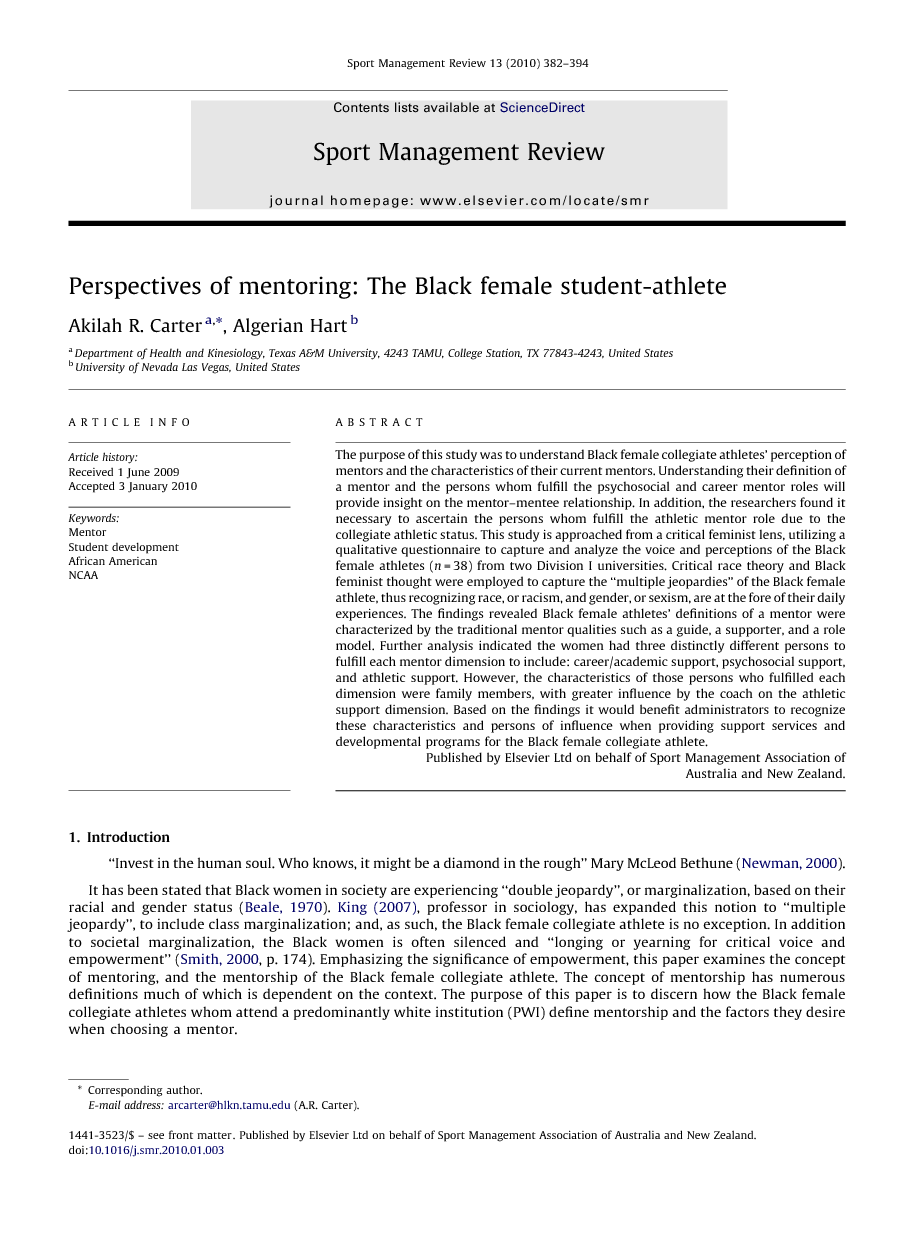 The purpose of this study was to understand Black female collegiate athletes’ perception of mentors and the characteristics of their current mentors. Understanding their definition of a mentor and the persons whom fulfill the psychosocial and career mentor roles will provide insight on the mentor–mentee relationship. In addition, the researchers found it necessary to ascertain the persons whom fulfill the athletic mentor role due to the collegiate athletic status. This study is approached from a critical feminist lens, utilizing a qualitative questionnaire to capture and analyze the voice and perceptions of the Black female athletes (n = 38) from two Division I universities. Critical race theory and Black feminist thought were employed to capture the “multiple jeopardies” of the Black female athlete, thus recognizing race, or racism, and gender, or sexism, are at the fore of their daily experiences. The findings revealed Black female athletes’ definitions of a mentor were characterized by the traditional mentor qualities such as a guide, a supporter, and a role model. Further analysis indicated the women had three distinctly different persons to fulfill each mentor dimension to include: career/academic support, psychosocial support, and athletic support. However, the characteristics of those persons who fulfilled each dimension were family members, with greater influence by the coach on the athletic support dimension. Based on the findings it would benefit administrators to recognize these characteristics and persons of influence when providing support services and developmental programs for the Black female collegiate athlete.

Since 1906, the NCAA has been a significant component in collegiate sport history. Today's college athletics are viewed almost mystically in the glamour and sense of importance reflected in individual fan intensity and Monday morning focused discussion. Arguably, the American appetite for intercollegiate athletics is second to none. Presently, college and university athletic teams are often revered beyond the traditional populations associated with collegiate institutions. As a result, athletics in the United States is an industry. In a 1981 text, Falla described the need for a representative “voice” in college sport evolving from the increasingly out-of-control state of amateur collegiate athletics. By creating the term “student-athlete” the NCAA positioned itself as the guardian of the collegiate athlete. Within this current context, this study examined perceptions via the lens of Black women, and their views of mentorship as NCAA governed student-athletes. As NCAA governed student-athletes, the Black women within this study fall under the 1906 Executive order naming the NCAA as the guardian of the collegiate athlete (Falla, 1981). Of course, one can argue the similarities between the 1906 and 2009 student-athletes vastly differ. Institutional diversity is gaining momentum across the country as Colleges and Universities push inclusion via programs, recruitment, retention and policy. NCAA policy development (e.g., mentorship) that integrates student-athlete perceptions could help prevent isolation while supporting a guardian like relationship initially intended in the NCAA founding documents. Many NCAA member institutions have created administrative offices specific to tolerance and support of diverse student populations. These services or programs can potentially serve as a blueprint or model that can assist in the holistic development of the Black female student-athlete. Therefore, as the introductory quotation by Bethune lament, “invest in the human soul”, for student-athlete diversity and student-athlete perceptions are essential to the present and future of the NCAA. Focused evaluation of student-athlete perceptions by the NCAA, provide valuable insight regarding student-athlete understanding and identifying best practice avenues for the empowerment of the voiceless. Mentoring has historically lacked a clear conceptual definition. In a thorough review of the mentoring literature, Merriam (1983) declared a precise definition of mentoring (at least one that all could agree upon) was not to be found. Several studies have indicated mentoring occurs when there is a trusting relationship between the mentor and the student-athlete, when there is an interest on the part of the mentor in the personal development of the student-athlete, when the mentor purposefully allocates his/her time to fulfill the needs of the student-athlete, and when an imitation of behavior takes place. Research on mentoring in sport is scarce. Perna et al. (1996) empirically investigated the prevalence of mentoring relationships among collegiate male athletes and non-athletes, and examined the effects of mentoring on their psychosocial development. However, Perna et al.’s (1996) study, like most on sport mentorship, is male focused. Increased research on female student-athletes may give details of more intimate information concerning the significant role mentors represent in the evolution of the Black female student-athlete. This study suggests mentoring is a valuable resource for collegiate sport. However, diverse road blocks exist that can potentially derail student-athletes lacking mentorship. As the guardian of student-athletes’, an NCAA lead charge that promotes formalized mentorship programs specifically for student-athletes, would be immense. Structured mentorship programs can only improve and generate positive impact on the NCAA governed student-athlete down the road.