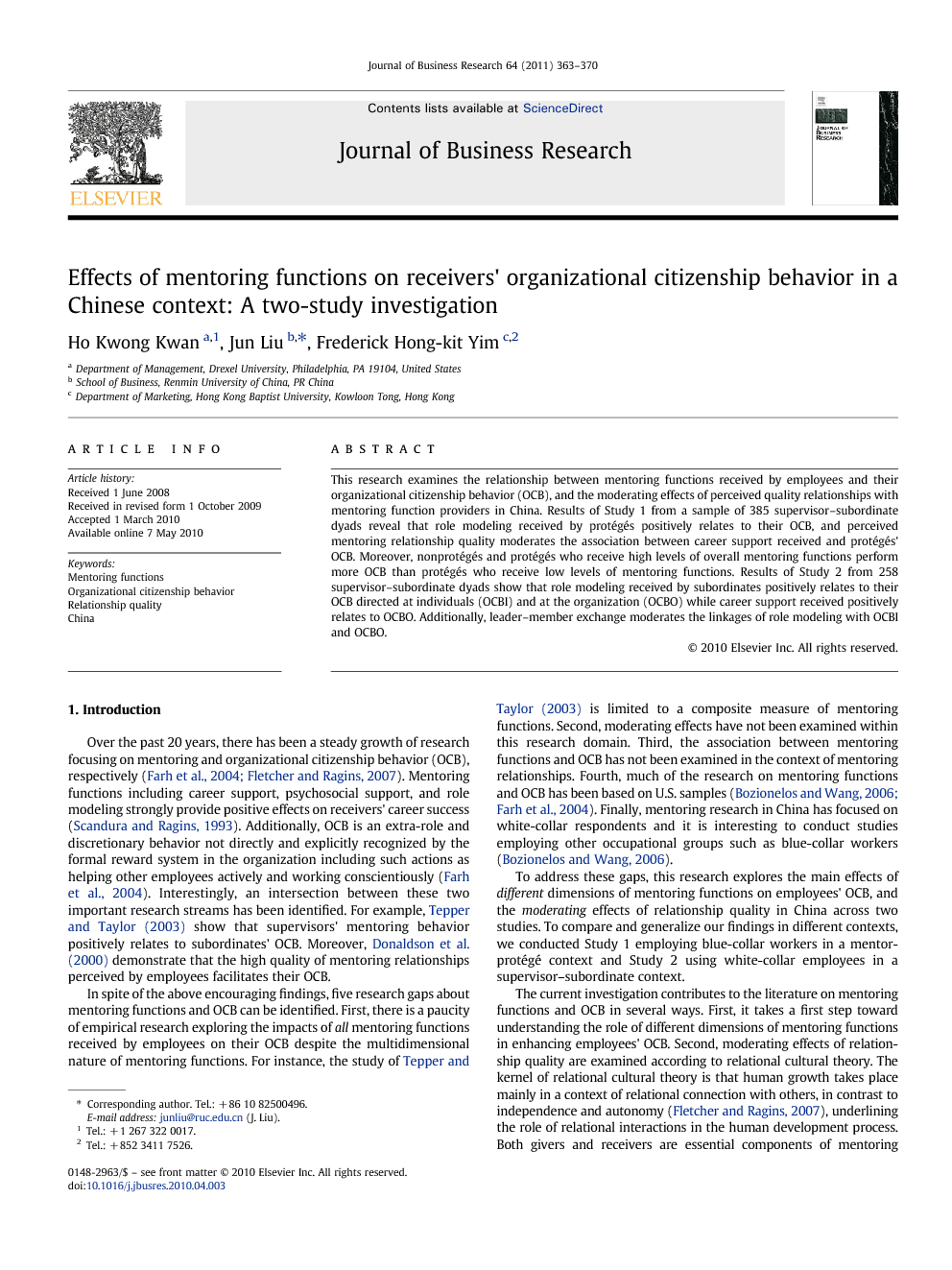 This research examines the relationship between mentoring functions received by employees and their organizational citizenship behavior (OCB), and the moderating effects of perceived quality relationships with mentoring function providers in China. Results of Study 1 from a sample of 385 supervisor–subordinate dyads reveal that role modeling received by protégés positively relates to their OCB, and perceived mentoring relationship quality moderates the association between career support received and protégés' OCB. Moreover, nonprotégés and protégés who receive high levels of overall mentoring functions perform more OCB than protégés who receive low levels of mentoring functions. Results of Study 2 from 258 supervisor–subordinate dyads show that role modeling received by subordinates positively relates to their OCB directed at individuals (OCBI) and at the organization (OCBO) while career support received positively relates to OCBO. Additionally, leader–member exchange moderates the linkages of role modeling with OCBI and OCBO.

Over the past 20 years, there has been a steady growth of research focusing on mentoring and organizational citizenship behavior (OCB), respectively (Farh et al., 2004 and Fletcher and Ragins, 2007). Mentoring functions including career support, psychosocial support, and role modeling strongly provide positive effects on receivers' career success (Scandura and Ragins, 1993). Additionally, OCB is an extra-role and discretionary behavior not directly and explicitly recognized by the formal reward system in the organization including such actions as helping other employees actively and working conscientiously (Farh et al., 2004). Interestingly, an intersection between these two important research streams has been identified. For example, Tepper and Taylor (2003) show that supervisors' mentoring behavior positively relates to subordinates' OCB. Moreover, Donaldson et al. (2000) demonstrate that the high quality of mentoring relationships perceived by employees facilitates their OCB. In spite of the above encouraging findings, five research gaps about mentoring functions and OCB can be identified. First, there is a paucity of empirical research exploring the impacts of all mentoring functions received by employees on their OCB despite the multidimensional nature of mentoring functions. For instance, the study of Tepper and Taylor (2003) is limited to a composite measure of mentoring functions. Second, moderating effects have not been examined within this research domain. Third, the association between mentoring functions and OCB has not been examined in the context of mentoring relationships. Fourth, much of the research on mentoring functions and OCB has been based on U.S. samples ( Bozionelos and Wang, 2006 and Farh et al., 2004). Finally, mentoring research in China has focused on white-collar respondents and it is interesting to conduct studies employing other occupational groups such as blue-collar workers (Bozionelos and Wang, 2006). To address these gaps, this research explores the main effects of different dimensions of mentoring functions on employees' OCB, and the moderating effects of relationship quality in China across two studies. To compare and generalize our findings in different contexts, we conducted Study 1 employing blue-collar workers in a mentor-protégé context and Study 2 using white-collar employees in a supervisor–subordinate context. The current investigation contributes to the literature on mentoring functions and OCB in several ways. First, it takes a first step toward understanding the role of different dimensions of mentoring functions in enhancing employees' OCB. Second, moderating effects of relationship quality are examined according to relational cultural theory. The kernel of relational cultural theory is that human growth takes place mainly in a context of relational connection with others, in contrast to independence and autonomy (Fletcher and Ragins, 2007), underlining the role of relational interactions in the human development process. Both givers and receivers are essential components of mentoring functions, and each party feels responsible to contribute to the growth and development of the other. The efficacy of mentoring functions on outcomes is thus mostly based on the quality of interactions between providers and receivers. Finally, our study employing both blue- and white-collar respondents in China is critical. Scholars have raised the concern that the mentoring and OCB findings from white-collar respondents in the West may not be generalized to Chinese societies because of the cultural and job role issues (Bozionelos and Wang, 2006 and Farh et al., 2004). It is thus timely to assess whether effects of mentoring functions on OCB established in the West hold in China.