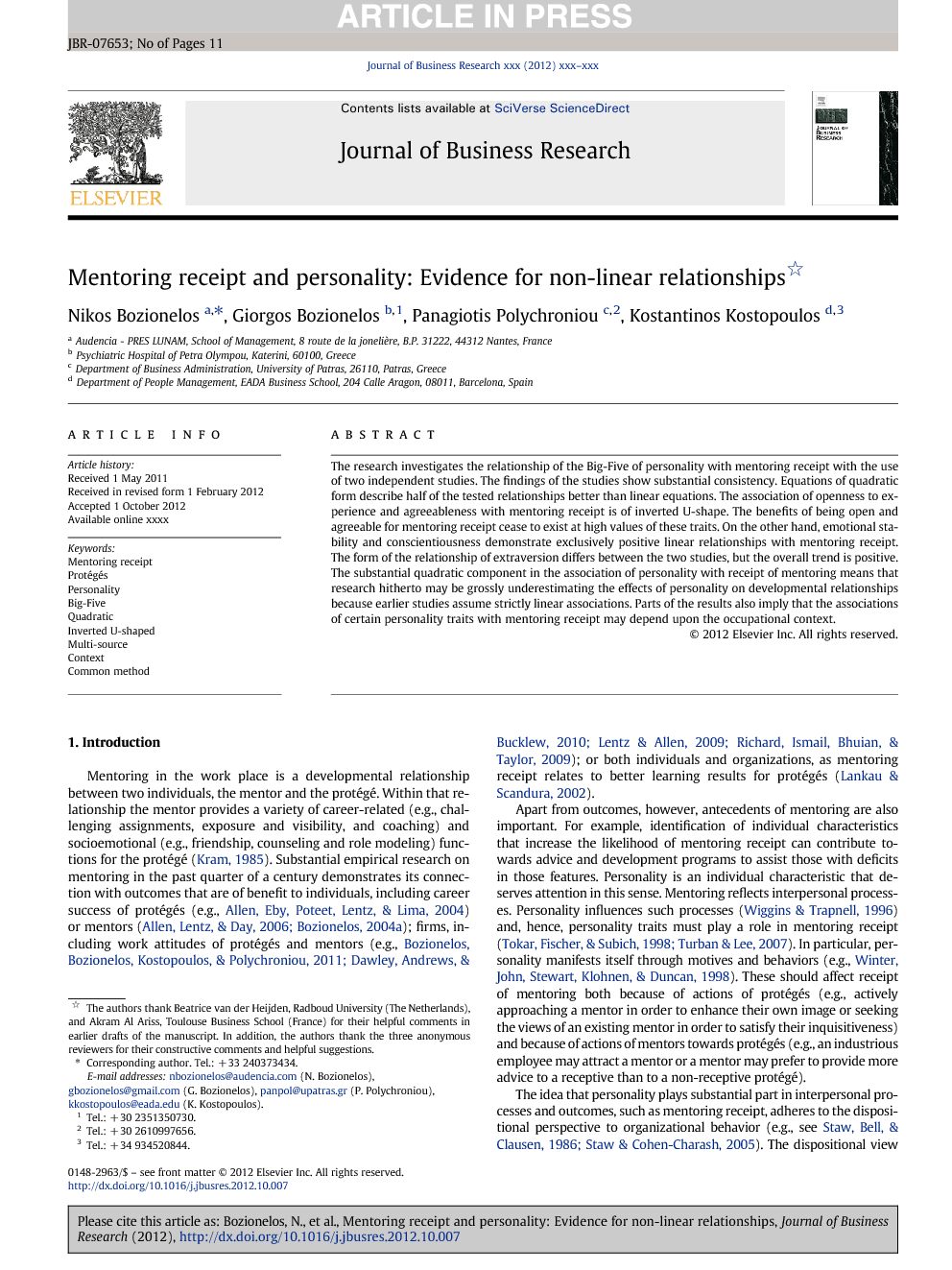 Mentoring in the work place is a developmental relationship between two individuals, the mentor and the protégé. Within that relationship the mentor provides a variety of career-related (e.g., challenging assignments, exposure and visibility, and coaching) and socioemotional (e.g., friendship, counseling and role modeling) functions for the protégé (Kram, 1985). Substantial empirical research on mentoring in the past quarter of a century demonstrates its connection with outcomes that are of benefit to individuals, including career success of protégés (e.g., Allen, Eby, Poteet, Lentz, & Lima, 2004) or mentors (Allen et al., 2006 and Bozionelos, 2004a); firms, including work attitudes of protégés and mentors (e.g., Bozionelos et al., 2011, Dawley et al., 2009, Lentz and Allen, 2009 and Richard et al., 2009); or both individuals and organizations, as mentoring receipt relates to better learning results for protégés (Lankau & Scandura, 2002). Apart from outcomes, however, antecedents of mentoring are also important. For example, identification of individual characteristics that increase the likelihood of mentoring receipt can contribute towards advice and development programs to assist those with deficits in those features. Personality is an individual characteristic that deserves attention in this sense. Mentoring reflects interpersonal processes. Personality influences such processes (Wiggins & Trapnell, 1996) and, hence, personality traits must play a role in mentoring receipt (Tokar et al., 1998 and Turban and Lee, 2007). In particular, personality manifests itself through motives and behaviors (e.g., Winter, John, Stewart, Klohnen, & Duncan, 1998). These should affect receipt of mentoring both because of actions of protégés (e.g., actively approaching a mentor in order to enhance their own image or seeking the views of an existing mentor in order to satisfy their inquisitiveness) and because of actions of mentors towards protégés (e.g., an industrious employee may attract a mentor or a mentor may prefer to provide more advice to a receptive than to a non-receptive protégé). The idea that personality plays substantial part in interpersonal processes and outcomes, such as mentoring receipt, adheres to the dispositional perspective to organizational behavior (e.g., see Staw et al., 1986 and Staw and Cohen-Charash, 2005). The dispositional view asserts that enduring dispositional traits, such as personality, determine individual outcomes across situations and settings, and through time. With respect to the present theme, this means that individuals with similar personality profiles must show consistency across settings and over time in the extent to which they receive mentoring. Hence, information on one's personality can enable the informed prediction of whether this individual will develop mentoring relationships. However, despite the importance of the issue, empirical research on the link between mentoring receipt and personality is limited, as authors stress (Dougherty et al., 2007 and Turban and Lee, 2007). Most importantly, extant research, albeit certainly contributory, has two drawbacks. First, that research is inconsistent in utilization of personality framework. Existing studies utilize a variety of frameworks, including the instrumentality-expressiveness (Fagenson, 1989, Kirchmeyer, 2002 and Scandura and Ragins, 1993) and the needs model (Fagenson, 1992 and Fagenson-Eland and Baugh, 2001), isolated traits (Allen et al., 2009 and Wang et al., 2010) or collections of isolated traits (Aryee et al., 1999 and Turban and Dougherty, 1994). This hinders the extraction of parsimonious conclusions because of different degrees of compatibility between personality frameworks and overlap between their traits. For example, extant studies employ the traits of instrumentality, locus of control, Type A personality, need for power, and self-monitoring. These traits overlap in various degrees (e.g., Lippa and Connely, 1990 and Morrison, 1997). However, neither do these traits refer to the same construct, nor do they share the same characteristics, nor do they overlap to the same degree. Therefore, utilization of a single personality framework that contains mutually orthogonal traits and provides a comprehensive description of human personality will improve clarity and enhance understanding. Second, research so far investigates only relationships of linear nature between personality and mentoring receipt. However, the presence of curvilinear relationships is within reason. Ignoring the presence of curvilinearity can lead to erroneous conclusions over the nature and magnitude of associations (e.g., Iversen et al., 2010 and Trevor et al., 1997), and that includes associations between personality and its outcomes (Vasilopoulos, Cucina, & Hunter, 2007). These limitations suggest that additional investigations on the subject may be beneficial.