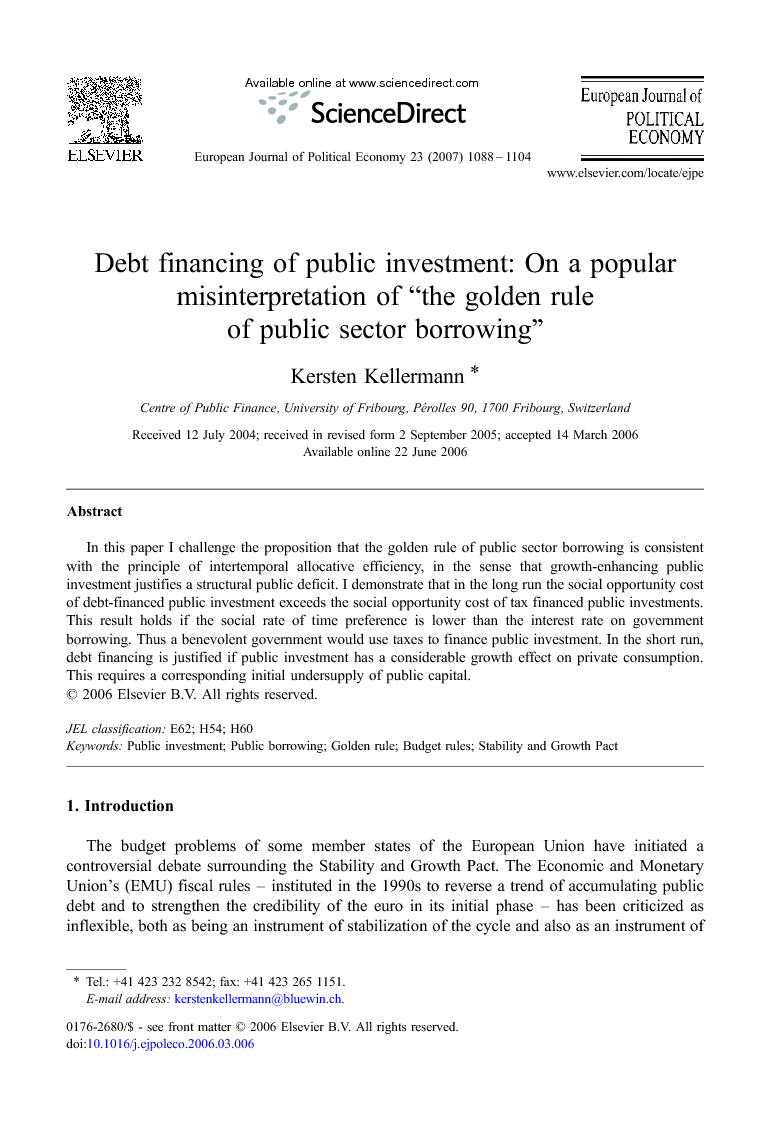 The budget problems of some member states of the European Union have initiated a controversial debate surrounding the Stability and Growth Pact. The Economic and Monetary Union's (EMU) fiscal rules – instituted in the 1990s to reverse a trend of accumulating public debt and to strengthen the credibility of the euro in its initial phase – has been criticized as inflexible, both as being an instrument of stabilization of the cycle and also as an instrument of supply side support. The outcome of this discussion is the recent change of the Stability and Growth Pact1 that above all affects the implementation of the excessive deficit procedure.2 In contrast to the earlier arrangement, exceeding the 3% reference value as the maximum value for the annual government budget deficit can be justified by a number of so-called “relevant factors”, in particular public investment (see European Commission, 2005).3 The special treatment of capital expenditure points to the “golden rule of public sector borrowing”. According to this fiscal rule, government deficit is accepted if accompanied by an increase in assets so that the government's net asset position does not deteriorate. Thus current expenditures must be covered by current receipts while for investment expenditure recourse to debt is allowed.4 The supporters of the golden rule argue that debt financing of public investment creates incentives for providing public infrastructure projects that contribute both to growth in demand and increased productivity (see DGB, 2003). Kopits (2001) proposes that the golden rule can be considered as a “growth oriented” fiscal rule that avoids placing an undue burden of compliance with certain types of fiscal policy rules on cuts in government investment spending. Debt financing of public investment is further considered to be in line with the benefit principle of taxation or – as Musgrave (1939) calls it – the “pay as you use principle”, and thus is consistent with a fair intergenerational distribution (see Yakita, 1994). If current expenditure is financed through taxation and investment is financed through borrowing, current taxpayers pay for current spending but future generations bear the cost of borrowing, as it will be they who gain from investment.5 With respect to intergenerational fairness or the contra-cyclical demand effects of public investments, it does not greatly matter whether the government invests in public consumption durables such as operas or parks or in productive projects that generate growth and improve the private factor productivity. Nevertheless, the debate on the golden rule focuses on productive public investment. In particular, the special treatment of public investment in the Stability and Growth Pact is to some extent motivated by fear that the EMU fiscal rules are likely to depress the volume of growth-enhancing public investment and thus to reduce economic performance in the future (see Buiter, 2001, Balassone and Franco, 2000 and Moro, 2002). In this context the golden rule is not only understood as an upper limit to public sector borrowing but is often misinterpreted with regard to the way that debt financing is an efficient instrument for financing public investment. From an empirical point of view, it is difficult to divide public capital expenditure into productive and consumptive investment. In addition, some current expenditure on health or education could also be considered to be growth-enhancing.6 However, most economic studies focus on public investment in infrastructure such as highways and other transportation facilities or communication systems owned by the public sector. In recent empirical analysis, different methodologies have been followed to investigate the impact of public investment on economic activities. In most of this research, measures of public investment are found to increase aggregate output. Yet there are exceptions (see Romp and de Haan, 2005). However, if certain public investment is assumed to be growth enhancing, the question remains whether governments choose the right projects and the right level of investment or the appropriate means of finance, and whether public investment decisions are efficient. This paper contributes to this discussion by challenging the proposition that debt financing of public investment is consistent with the principle of intertemporal allocative efficiency in the sense that growth-enhancing public investment justifies a structural public deficit. I demonstrate that the marginal opportunity cost of public investment depends on the finance instrument chosen by the government. Thus, the central requirement of intertemporal allocative efficiency, which is that public investment should be undertaken if the marginal social rate of return equals at least the marginal social opportunity cost, says little about the efficient choice of financing public investment (see Buiter, 2001).7 The rest of the paper is structured as follows. Section 2 sets out the empirical context for our discussion. Section 3 examines the implication of tax and debt financing of public investment in a neoclassical growth model both in the long run when the economy reaches its equilibrium and during transition toward the steady state. To finance productive public infrastructure, the government can choose between a distorting source-based tax on capital, a lump sum tax, and public borrowing. Since we consider a small open economy, the interest rate is determined in the world market. Section 4 summarizes the conclusions.

The golden rule of public sector borrowing is that government borrowing should not exceed public capital formation over the cycle. Thus, current expenditure should be covered by current receipts while recourse to debt is allowed for investment spending. In recent years the golden rule has been suggested as a way of modifying and loosening the EMU fiscal rules. It has been argued that the Stability and Growth Pact in its initial version may reduce the public sector's contribution to capital accumulation and that implementation of a more golden-rule oriented fiscal rule may prevent an investment slowdown in the public sector of EMU member countries. Following the change of the Stability and Growth Pact, exceeding the maximum value of annual government budget deficit of 3% of GDP can be justified by public investment. Most arguments in the controversial debate of the rationality of the golden rule are in a political economic setting. It has been argued that, if the process of public decision-making produces a bias towards excessive public investment, then the adoption of the golden rule may prove counterproductive. On the other hand, if a tendency towards strategic underinvestment predominates – as proposed by Peletier et al. (1999) – then the golden rule assures a more efficient level of public investment. In normative settings the golden rule is often judged as “essentially plausible” (see Deutsche Bundesbank, 2005). In this paper however, using a normative framework, I have challenged this common viewpoint and show that debt financing of public investment does not enhance economic growth. The arguments presented in this paper add an important aspect to the debate of the golden rule. I argue that public borrowing is not an efficient instrument for financing public investment by examining how debt financing affects social welfare as well as the stock of public and private capital. Public capital is considered to increase private factor productivity and is provided by government to improve labour productivity or accommodate mobile capital. We argue under assumptions of a distortionary source-tax and a fixed interest rate in favour of debt financing. Both assumptions could be interpreted as discriminating against the instrument of tax financing. However, we demonstrate that a benevolent government that cares about future generations and is less myopic than private households uses taxes to finance public investment, because debt financing increases the marginal opportunity cost of public investment. This result holds at least in the medium and long term. In the short run, financing public investment by borrowing can be justified if an undersupply of public capital initially exists so that public investment gives rise to considerable transitory growth effects.