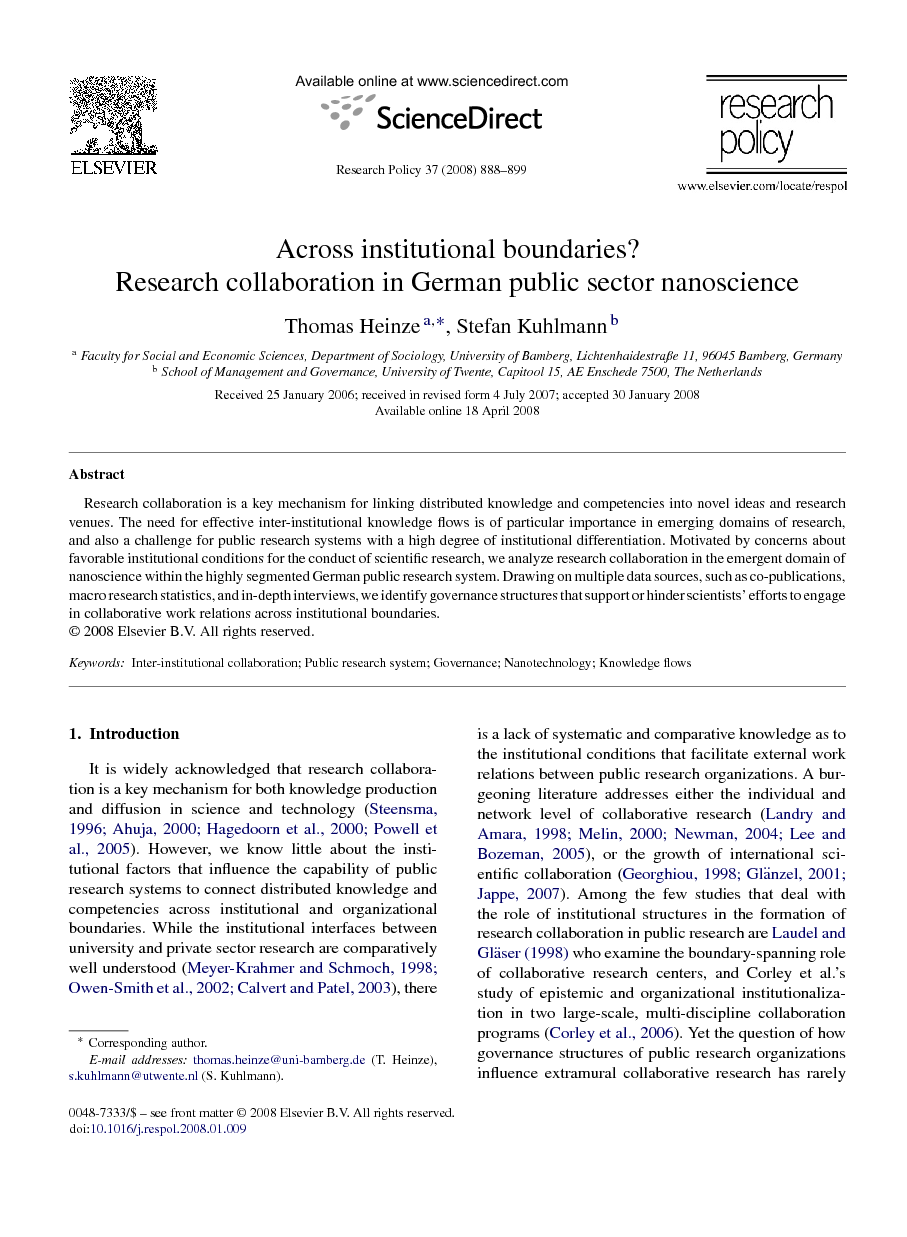 Research collaboration is a key mechanism for linking distributed knowledge and competencies into novel ideas and research venues. The need for effective inter-institutional knowledge flows is of particular importance in emerging domains of research, and also a challenge for public research systems with a high degree of institutional differentiation. Motivated by concerns about favorable institutional conditions for the conduct of scientific research, we analyze research collaboration in the emergent domain of nanoscience within the highly segmented German public research system. Drawing on multiple data sources, such as co-publications, macro research statistics, and in-depth interviews, we identify governance structures that support or hinder scientists’ efforts to engage in collaborative work relations across institutional boundaries

It is widely acknowledged that research collaboration is a key mechanism for both knowledge production and diffusion in science and technology (Steensma, 1996, Ahuja, 2000, Hagedoorn et al., 2000 and Powell et al., 2005). However, we know little about the institutional factors that influence the capability of public research systems to connect distributed knowledge and competencies across institutional and organizational boundaries. While the institutional interfaces between university and private sector research are comparatively well understood (Meyer-Krahmer and Schmoch, 1998, Owen-Smith et al., 2002 and Calvert and Patel, 2003), there is a lack of systematic and comparative knowledge as to the institutional conditions that facilitate external work relations between public research organizations. A burgeoning literature addresses either the individual and network level of collaborative research (Landry and Amara, 1998, Melin, 2000, Newman, 2004 and Lee and Bozeman, 2005), or the growth of international scientific collaboration (Georghiou, 1998, Glänzel, 2001 and Jappe, 2007). Among the few studies that deal with the role of institutional structures in the formation of research collaboration in public research are Laudel and Gläser (1998) who examine the boundary-spanning role of collaborative research centers, and Corley et al.'s study of epistemic and organizational institutionalization in two large-scale, multi-discipline collaboration programs (Corley et al., 2006). Yet the question of how governance structures of public research organizations influence extramural collaborative research has rarely been addressed in recent sociology of science and public policy studies. The desire to know more about the factors that contribute to research collaboration is given further impetus by the substantial changes seen over the last three decades in the institutional and organizational conditions under which scientific research is conducted (Senker, 2006, Shapira and Kuhlmann, 2003 and Gornitzka et al., 1998). The need for effective inter-institutional knowledge flows is particularly critical in emerging research domains on the one hand, and institutionally differentiated research systems on the other hand. In emerging science and technology domains, a sizeable share of research is conducted at the intersection of established scientific disciplines and across fundamental and applied research, seeking for and building on cognitive and institutional complementarity. One such research domain is nanoscale science and technology, referred to as “nano S&T” in the following. Nano S&T embraces several disciplines and research areas, such as applied physics, materials science, physical chemistry, physics of condensed matter, biochemistry and engineering and polymer science, and potential application areas as diverse as drug delivery, environmental sensing, manufacturing, and quantum computing (Porter et al., 2008, Heinze, 2004, Heinze, 2006 and Hullmann and Meyer, 2003). The need for effective inter-institutional knowledge flows is also critical in public research systems with a high level of institutional differentiation. From an innovation policy point of view, such research systems need not only to allow knowledge diffusion across institutional boundaries via career paths, but also to institutionalize effective mechanisms to support day-to-day collaborations across organizations that scientists seek to establish and maintain. In this regard, the German research system (GRS) is an interesting example due to its high level of institutional fragmentation. In addition to the universities, the GRS embraces a large extra-university sector including institutes of the Helmholtz Research Centers (HGF), the Max-Planck Society (MPG), the Leibniz Association (WGL), and the Fraunhofer Society (FhG). These organisations have developed quasi-functional monopolies in particular research domains, such as fundamental research (MPG), applied contract research (FhG), and big-science research facility management (HGF). In consequence, they have traditionally not collaborated much with each other (Hohn and Schimank, 1990). Therefore, studying the institutionally fragmented GRS in the emerging domain of nano S&T is an interesting case, because it touches upon the question how well the differentiated institutional structure of the GRS is aligned to the need for inter-institutional research in the emergent research domain of nano S&T. If institutional segmentation is viewed as an obstacle for effective knowledge exchange, then systems with such structures in their public research system are not expected to be among the top performers internationally. This, however, is not true for German nano S&T research. The GRS scores relatively high in what has been called the “global nanotechnology race”. In absolute terms, Germany ranks fourth in publication output worldwide and third in patent applications at the European Patent Office (Hullmann, 2006). In relation to GDP measures, Germany ranks even higher (Heinze, 2004: Fig. 4). Our analysis addresses three interrelated questions. First, how common is research collaboration across institutional boundaries empirically? Second, what are scientists’ rationales to engage in collaborative research? Third, which governance structures are either conducive to inter-institutional research collaboration or interfere with scientists’ efforts to engage in collaborative work? For answering these questions, we frame our analysis by dimensions of governance that reflect the ongoing debate on the coordination of autonomous, but interdependent actors (Hollingsworth and Boyer, 1997 and Lütz, 2003). Furthermore, we draw on multiple data sources such as annual reports of German research institutions, internal reports and communications, co-publication analyses, and macro research statistics. Most importantly, we conducted 32 semi-structured interviews between 2004 and 2006 with representatives of all non-university research organizations, the German Ministry for Education and Research (BMBF), institute directors at universities and extra-university institutions, and senior researchers and junior group leaders in the field of nano S&T. More details on our data are presented in Appendix A. Sections 2 and 3 provide key facts about the domain of nano S&T and the GRS. Sections 4 and 5 sketch current collaborative activities in nano S&T across research institutions in Germany and discuss rationales for cooperative research relationships across institutional boundaries. In Sections 6 and 7, we elaborate on institutional factors that either facilitate or hinder the transfer of knowledge and expertise between research organizations. Section 8 summarizes our findings and gives an outlook on research desiderata.

Our analysis started with the observation that the need for effective inter-institutional knowledge flows is critical in the emerging domain of nano S&T, where a sizeable share of research is conducted at the intersection of established scientific disciplines and across domains of fundamental and applied research. In addition, organizing effective knowledge flows is a particular challenge in institutionally segmented research systems, such as the GRS with a broad and differentiated extra-university research landscape. However, since little is known about the factors that influence the capability of public research systems to connect distributed knowledge and competencies across institutional and organizational boundaries, we investigated inter-institutional knowledge flows within the GRS in the domain of nano S&T. First, we find that the majority of domestic research collaborations are observed between universities and the extra-university research sector, while co-authorship ties within the extra-university sector are tenuous. Our qualitative data suggests a more nuanced picture of collaborative relations including cooperation contracts between research institutes, joint junior research groups, or informal meetings of institute directors, particularly within the extra-university research sector. Second, we find that scientists collaborate primarily to expand and improve their research capacity, to benefit from institutional complementarities, and to enhance their visibility within the research field. Our findings add to collaboration motives identified by previous literature including curiosity, knowledge advancement, sharing the excitement of a research area with other scientists, or intellectual companionship (Katz and Martin, 1997 and Beaver, 2001). Third, we identify specific thematic profiles, recruitment of research staff, support for job mobility, research leadership, balanced core and third-party funding, and flexible mechanisms for funding allocation as institutional conditions that are conducive to inter-institutional research collaboration. In contrast, organizational stereotypes and prejudices, incompatible working routines anchored in diverse organizational missions, lack of interface management, and sustained budget cuts particularly in the university system, have had negative impacts on scientists’ opportunities to engage in collaborative work relations outside their home institution. Our empirical evidence suggests that the institutional structure of the GRS is permeable enough to allow sufficient knowledge flows in the emergent research domain of nano S&T between universities and the extra-university research sector. In fact, this seems one key explanation why Germany is among the top players in the global nanotechnology race. In recent years, the Max-Planck-Society and the Helmholtz-Association have taken several measures to improve collaborative relationships with universities, for instance via the establishment of new joint junior research groups, or contracts with universities that allow mutual access to instrumentation and library services, and the establishment of new research schools. Sufficient knowledge flows cannot be observed, however, between organizations of the extra-university public research sector. Here many of the adverse effects of the segmented institutional structure, described in Section 6, are salient. The high level of segmentation becomes especially obstructive when, like in the case of the GRS, research systems operate both under output pressure and resource stagnation. Recent efforts to establish stronger collaborative relationships between the MPG and the FhG are exceptional and are not indicative of a paradigm shift within the public non-university research sector. The strong position of German research in global nano S&T has also to do with the many collaborative ties to research labs abroad. Several of the studied research teams are active collaborators of groups in Europe, the United States and Russia. One key condition of these collaborations could be the gradual emergence of the “European Research Area” (Kuhlmann, 2001), but still only little is known about the institutional conditions (organizational cultures, funding systems, intellectual property rights regulations, career paths, or promotion criteria) for effective knowledge transfer in the public research sector (in nano S&T) across inherited national research systems—a field for future research.