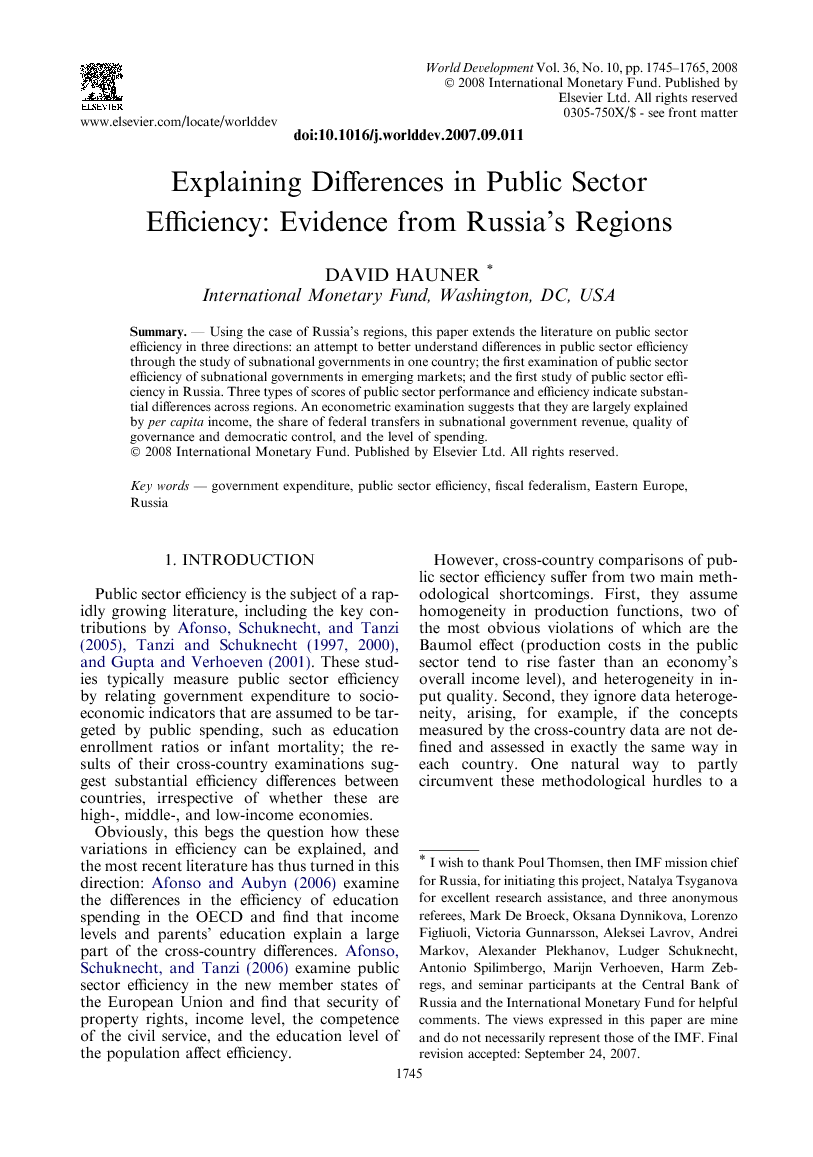 Public sector efficiency is the subject of a rapidly growing literature, including the key contributions by Afonso et al., 2005, Tanzi and Schuknecht, 1997, Tanzi and Schuknecht, 2000 and Gupta and Verhoeven, 2001. These studies typically measure public sector efficiency by relating government expenditure to socio-economic indicators that are assumed to be targeted by public spending, such as education enrollment ratios or infant mortality; the results of their cross-country examinations suggest substantial efficiency differences between countries, irrespective of whether these are high-, middle-, and low-income economies. Obviously, this begs the question how these variations in efficiency can be explained, and the most recent literature has thus turned in this direction: Afonso and Aubyn (2006) examine the differences in the efficiency of education spending in the OECD and find that income levels and parents’ education explain a large part of the cross-country differences. Afonso, Schuknecht, and Tanzi (2006) examine public sector efficiency in the new member states of the European Union and find that security of property rights, income level, the competence of the civil service, and the education level of the population affect efficiency. However, cross-country comparisons of public sector efficiency suffer from two main methodological shortcomings. First, they assume homogeneity in production functions, two of the most obvious violations of which are the Baumol effect (production costs in the public sector tend to rise faster than an economy’s overall income level), and heterogeneity in input quality. Second, they ignore data heterogeneity, arising, for example, if the concepts measured by the cross-country data are not defined and assessed in exactly the same way in each country. One natural way to partly circumvent these methodological hurdles to a better understanding of what explains differences in public sector efficiency is to look at differences in subnational government efficiency in a single country. This is the avenue we will pursue in this paper. Using the case of Russia’s regions, this paper extends the nascent literature on public sector efficiency in three directions: First, it aims to deepen the understanding of what explains public sector efficiency through the study of variations between subnational governments in one country. This has the significant advantage that many of the heterogeneity issues that plague cross-country studies are likely to be less pertinent: while the production costs certainly vary across Russia’s regions, the variation is smaller than relative to other countries; input quality is likely to be relatively similar; and data heterogeneity should be minimized as all data are produced by the national statistical agency. Among emerging markets, Russia makes a perfect case for such an endeavor, as it is highly fiscally decentralized (sub-federal governments account for about half of general government expenditure), its 89 regions constitute a large and diverse sample, and relatively rich data are being collected on them. Second, while there is already a substantial literature on local public sector efficiency in advanced economies,1 this is—to the best of our knowledge—the first examination of public sector efficiency of subnational governments in emerging markets, with the exception of a micro study of the targeting of specific local government programs in India (Bardhan & Mookherjee, 2006). As Russia, many of these countries are highly fiscally decentralized, and a better understanding of what explains efficiency differences at the subnational level will be essential to improve efficiency on the general government level. Third, this is the first study of public sector efficiency in Russia. It comes at a time when public spending is rising rapidly in the wake of buoyant oil revenues, and President Putin has identified the health and education sectors as priority areas in his National Projects. However, while the resources are available, the effectiveness of the additional spending will require structural reform of the public sector that has made little progress of late. Today, as 10 years ago, Russia is still very much entangled in the “transition of government” that Shleifer (1997) identified as an “essential part of transition to capitalism.” A better understanding of the efficiency differences across regions thus also holds potentially important policy implications for Russia at the current juncture. In the first part of the empirical analysis, we compute three types of scores per policy sector for each region: public sector performance (PSP) and public sector efficiency (PSE) as proposed by Afonso et al. (2005), and data envelopment analysis (DEA) efficiency scores as used, for example, by Afonso and Aubyn (2006). As most of the literature, we compute these scores for the health, education, and social protection sectors, because no reasonable data on outcome indicators for other sectors is available. The results, while subject to considerable room for interpretation, provide preliminary evidence of substantial inefficiency of many of Russia’s sub-federal governments. They suggest that, on average, the current outcomes in these sectors could be produced with about 50–70% of the actual public expenditure if the less efficient regions would emulate the more efficient ones. In the second part of the analysis, we relate these scores econometrically to possible explanatory factors in the areas of social and environmental conditions, relationship to the central government, quality of governance, democratic control, the size of public and private expenditure in the relevant sectors, and initial conditions. We find that higher public sector performance and efficiency tend to be associated, in particular, with higher per capita income, a smaller share of federal transfers in subnational government revenue, better governance, stronger democratic control, and less public spending. These findings are in line with the related theoretical and empirical public finance literature, but also with well-known aspects of the determinants of economic growth or informality. We thus argue that our findings are likely to generalize beyond the Russian context. We conclude with several specific policy implications for the ongoing public sector reforms in Russia. The paper proceeds as follows: Section 2 discusses methodological issues regarding public sector efficiency; Section 3 presents efficiency scores for Russia’s regions; Section 4 relates them to potential correlates; and Section 5 concludes.

Using the case of Russia’s regions, this paper has extended the nascent literature on public sector efficiency in three directions: an attempt to better understand what explains differences in public sector efficiency through the study of variations between subnational governments in one country; the first examination of public sector efficiency of subnational governments in emerging markets; and the first study of public sector efficiency in Russia. Computing a number of public sector performance and efficiency scores for the health, education, and social protection sectors, we found suggestive evidence of substantial inefficiency of many of Russia’s subnational governments. It appears that, on average, the current outcomes in health and education could be produced with about two-thirds of the actual inputs if the less efficient regions would emulate the more efficient ones. Relating these scores econometrically to possible explanatory factors, we found that higher public sector performance and efficiency tend to be associated, in particular, with higher per capita income, a smaller share of federal transfers in subnational government revenue, better governance, stronger democratic control, and less public spending. These findings are in line with the related theoretical and empirical public finance literature, but also with well-known aspects of the determinants of economic growth or informality. We thus argue that our findings are likely to generalize beyond the Russian context. For Russia specifically, some of our findings have important implications for the current policy debate. The country has witnessed for a number of years extraordinarily large revenues from resource exports that have led to rapid increases in expenditure and mounting political pressure for its further acceleration. Given the undisputable need to improve social services, the social sectors that we have examined are central to this debate, as mirrored in the prominent place of health and education in President Putin’s National Projects. However, the key findings of this study may pour cold water on hopes for a rapid improvement of service delivery in the current institutional context. Exaggerating them, one could say that outcomes are pretty much the same, whatever regions spend. We have argued that the apparent failure to translate higher spending into better outcomes is, in addition to exogenous factors that are difficult or impossible to change, related to weaknesses in governance and democratic control, as well as adverse incentives provided by the intergovernmental transfer system. This suggests that the ongoing rapid increase of public expenditure in Russia is only likely to deliver the hoped-for improvement in public services if it is combined with reforms that are conducive to expenditure efficiency, broadly classifiable into five areas: (i) a restructuring and downsizing of the existing network of health and education facilities to improve efficiency; (ii) administrative reforms to improve governance and incentives in the public sector, including anti-corruption measures, performance-pay for public employees, and greater accountability for service providers in health and education; (iii) reforms of intergovernmental transfers that provide incentives from the center for improved efficiency of spending on the subnational level, including greater transparency as provided by performance budgeting, as well as stricter monitoring of the spending of federal transfers; (iv) a stronger link between financing and service delivery, such as through per capita and per student financing; and (v) better management of the large and volatile resource revenues. Without such reforms, more spending in the social sectors is unlikely to generate the hoped-for benefits for the population.