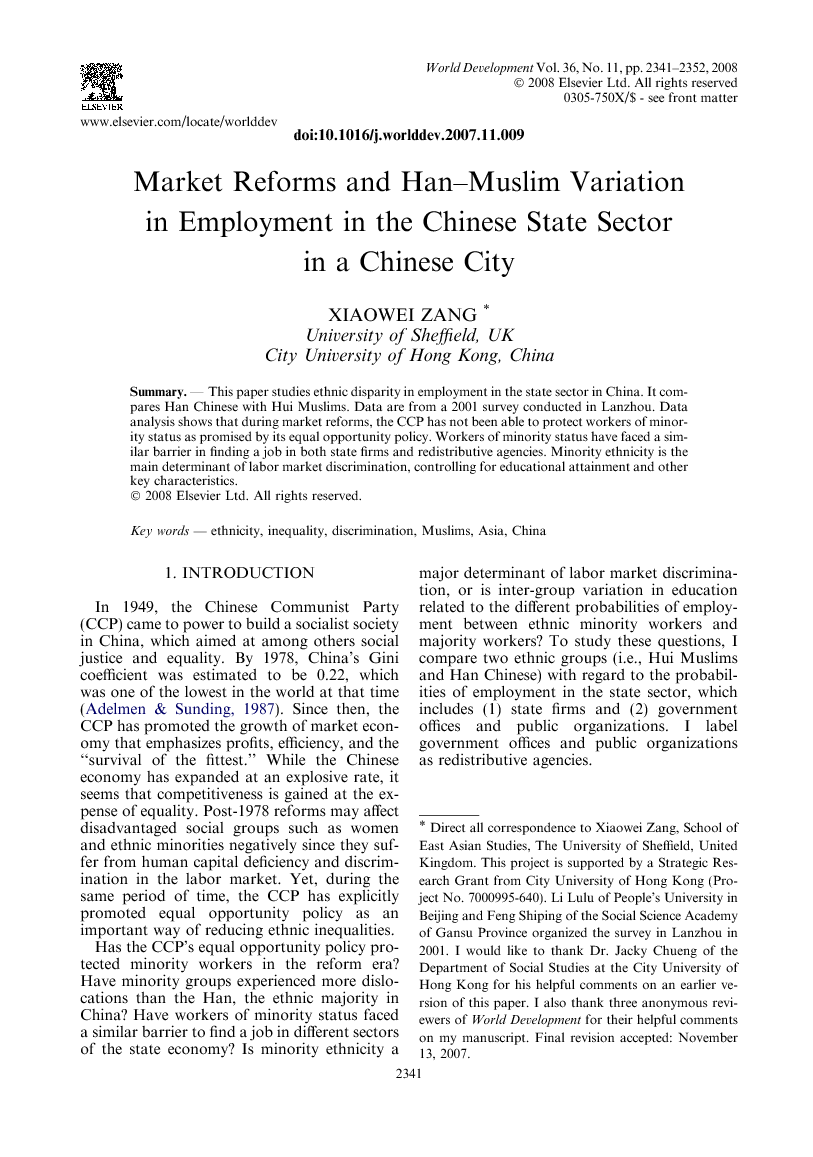 This paper studies ethnic disparity in employment in the state sector in China. It compares Han Chinese with Hui Muslims. Data are from a 2001 survey conducted in Lanzhou. Data analysis shows that during market reforms, the CCP has not been able to protect workers of minority status as promised by its equal opportunity policy. Workers of minority status have faced a similar barrier in finding a job in both state firms and redistributive agencies. Minority ethnicity is the main determinant of labor market discrimination, controlling for educational attainment and other key characteristics.

In 1949, the Chinese Communist Party (CCP) came to power to build a socialist society in China, which aimed at among others social justice and equality. By 1978, China’s Gini coefficient was estimated to be 0.22, which was one of the lowest in the world at that time (Adelmen & Sunding, 1987). Since then, the CCP has promoted the growth of market economy that emphasizes profits, efficiency, and the “survival of the fittest.” While the Chinese economy has expanded at an explosive rate, it seems that competitiveness is gained at the expense of equality. Post-1978 reforms may affect disadvantaged social groups such as women and ethnic minorities negatively since they suffer from human capital deficiency and discrimination in the labor market. Yet, during the same period of time, the CCP has explicitly promoted equal opportunity policy as an important way of reducing ethnic inequalities. Has the CCP’s equal opportunity policy protected minority workers in the reform era? Have minority groups experienced more dislocations than the Han, the ethnic majority in China? Have workers of minority status faced a similar barrier to find a job in different sectors of the state economy? Is minority ethnicity a major determinant of labor market discrimination, or is inter-group variation in education related to the different probabilities of employment between ethnic minority workers and majority workers? To study these questions, I compare two ethnic groups (i.e., Hui Muslims and Han Chinese) with regard to the probabilities of employment in the state sector, which includes (1) state firms and (2) government offices and public organizations. I label government offices and public organizations as redistributive agencies. In a market economy, workers may choose to work in private firms or the public sector. A job in a private firm is not necessarily better than a job in the public sector, and vice versa. In China, however, job attainment in the state sector was a major indicator of status attainment before the mid-1990s since it was associated with a good wage, housing benefits, health care, pensions, etc. ( Bian, 1994 and Walder, 1986). Today, employment in the state sector is still a treasured achievement given the cut-throat competition in the labor market in China. It offers more job security than the private sector. A job in a government agency or public organization has continued to be a major avenue of upward mobility in urban China ( Goodman, 2008 and Tomba, 2004). Data for this research are from a 2001 survey (n = 1,992) conducted in Lanzhou city, China. Before I conduct data analysis, I provide some background information about Hui Muslims in the PRC and summarize existing views of ethnic inequality in employment in the reform era.

In this research, I ask if the CCP has been able to pursue efficiency in market reforms and at the same time protect workers of minority status as promised by its equal opportunity policy. I also ask whether workers of minority status have faced a similar barrier in finding a job in both state firms and redistributive agencies, and whether different probabilities of employment in the state sector between the Hui and the Han have resulted from inter-group variation in schooling. Finally, I ask whether minority ethnicity is the main determinant of labor market discrimination, controlling for educational attainment and other key characteristics. To study these questions, I compare Hui–Han differences in job attainment in the state sector. I show ethnic stratification in employment in the reform era. Controlling the background characteristics does not remove the Hui–Han differences in job attainment in both state firms and redistributive agencies, which suggests the state’s inability to achieve ethnic parity in job attainment in the reform era despite its equal opportunity policy. Minority ethnicity is a key determinant of labor market discrimination and is more important than gender in job attainment in the state sector. I also find that returns from education to the Hui are smaller than that to the Han in terms of job attainment in state firms, whereas there is no inter-group variation in educational effects on recruitment into government offices and public organizations in China. This is because of the role differentiation in the state sector. All state danwei were redistributive agencies before market reforms. In the reform era, state firms have been differentiated from redistributive agencies in budget allocation and institutional tasks, which leads to different educational effects on employment in state firms and redistributive agencies, respectively. Educational effects on minority achievement in the state sector vary across institutional contexts. However, even in redistributive agencies, Hui workers do not receive same or greater returns from education than Han workers. As a result, they are less likely than the Han to find a job in redistributive agencies. As noted, minority workers cannot overcome the prejudice and discrimination they suffer in the labor market unless they receive more education or higher returns to education than Han workers. It is necessary to point out that the data for this research are derived from the fieldwork in Lanzhou. It may not be appropriate to make sweeping arguments on ethnic inequality in China on the basis of the findings reported in this research. Also, the state is the primary enforcer of affirmative action in society. It is possible that minority workers are subject to more discrimination in private firms than in the state sector. Future research on the effect of post-1978 reforms on ethnic inequality shall analyze patterns of ethnic discrimination in the private sector in China.