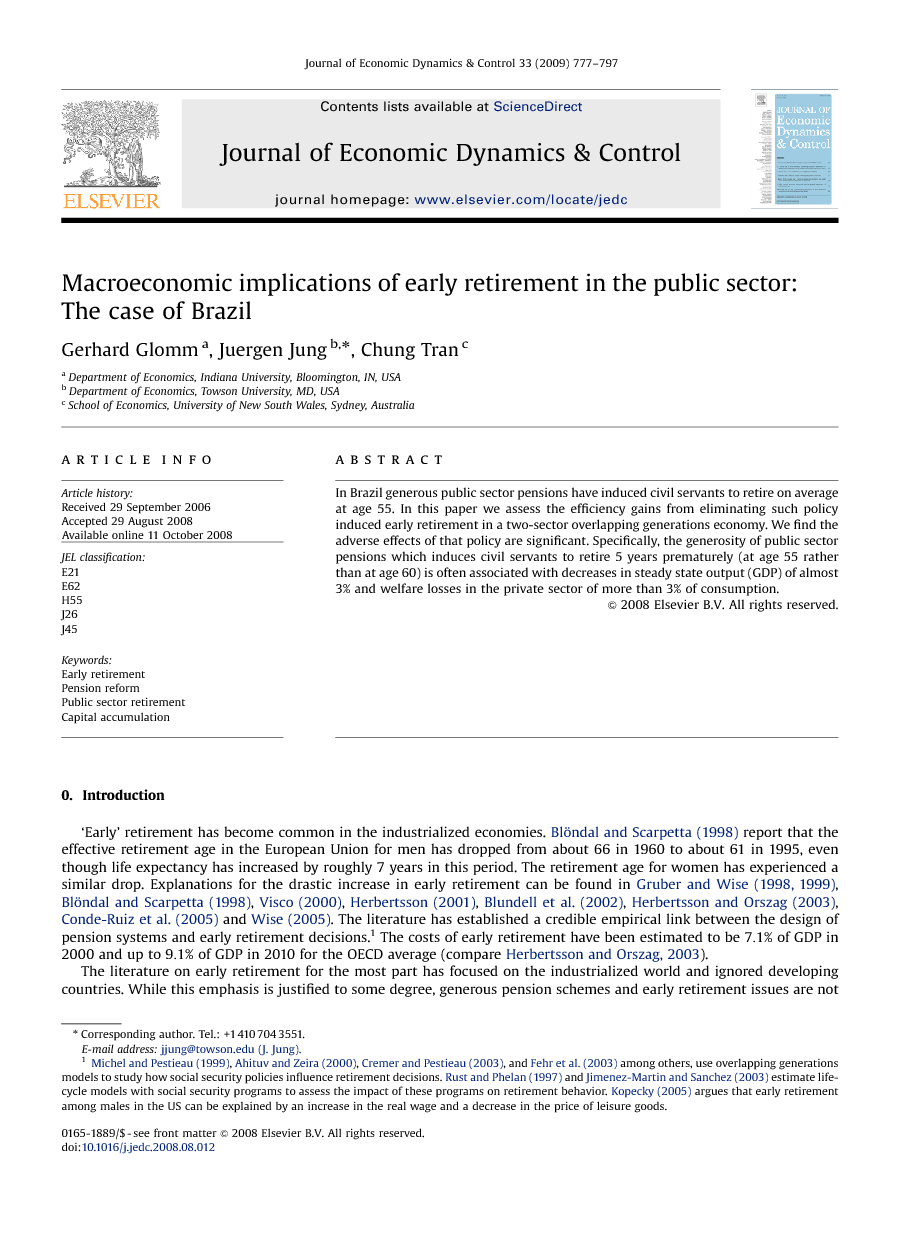 In Brazil generous public sector pensions have induced civil servants to retire on average at age 55. In this paper we assess the efficiency gains from eliminating such policy induced early retirement in a two-sector overlapping generations economy. We find the adverse effects of that policy are significant. Specifically, the generosity of public sector pensions which induces civil servants to retire 5 years prematurely (at age 55 rather than at age 60) is often associated with decreases in steady state output (GDP) of almost 3% and welfare losses in the private sector of more than 3% of consumption.

‘Early’ retirement has become common in the industrialized economies. Blöndal and Scarpetta (1998) report that the effective retirement age in the European Union for men has dropped from about 66 in 1960 to about 61 in 1995, even though life expectancy has increased by roughly 7 years in this period. The retirement age for women has experienced a similar drop. Explanations for the drastic increase in early retirement can be found in Gruber and Wise, 1998 and Gruber and Wise, 1999, Blöndal and Scarpetta (1998), Visco (2000), Herbertsson (2001), Blundell et al. (2002), Herbertsson and Orszag (2003), Conde-Ruiz et al. (2005) and Wise (2005). The literature has established a credible empirical link between the design of pension systems and early retirement decisions.1 The costs of early retirement have been estimated to be 7.1%7.1% of GDP in 2000 and up to 9.1%9.1% of GDP in 2010 for the OECD average (compare Herbertsson and Orszag, 2003). The literature on early retirement for the most part has focused on the industrialized world and ignored developing countries. While this emphasis is justified to some degree, generous pension schemes and early retirement issues are not wholly absent in developing countries. In Brazil for example, the public sector pensions rank among the most generous in the world. Public sector pensioners account for about 5%5% of all pensioners, yet receive about 50%50% of the value of all pension payments. The average contribution rate to public sector pensions is 11%11% and much lower than the 27%27% contribution rate in the urban private sector. In Brazil, the constitutionally guaranteed provision of ‘integrality’ ensures that public sector pensions match the income in the year of retirement of the civil servant. This tends to be the maximum income in the career of a civil servant since pay grades are a function of seniority.2 The provision of ‘parity’ ensures that pension payments are indexed to wages of current civil servants. After retiring from the civil service, workers are allowed to accept jobs in the private sector and receive public sector pensions simultaneously. As a consequence, civil servants retired on average at the age of 54 in 2002 (it was 49 in 1988). Fig. 1 illustrates the retirement age distribution of civil servants of the federal government.3 In addition, there have been serious fiscal consequences of generous public pension schemes for civil servants. According to Souza et al. (2004) the deficit of the public sector pension system amounts to 3.5%3.5% of private sector output.There is a relatively small literature studying the macroeconomic effects of pension reform in developing countries generally or in Brazil specifically. Ferreira (2004) studies social security reform in Brazil in the context of a small open economy. He finds large welfare gains from social security reform. Ferreira (2005) studies the redistributional effect of social security reform along the transition in Brazil. Glomm et al. (2006) study the macroeconomic effects of generous public sector pensions, concentrating on opportunity costs of foregone public education expenditure and infrastructure investment. These studies abstract from early retirement effects. In this paper we investigate the effects of generous pensions for civil servants. We use an overlapping generations model where a period is 5 years and where individuals become economically active at age 20 and die for sure at age 90. The government hires civil servants and invests in a public capital which are combined to produce a productive public good. Retirement among civil servants may occur endogenously depending on the design of the pension system. Upon early retirement civil servants are free to pursue employment in the private sector. All government expenditures are financed by taxes on labor, consumption and capital income. We calibrate the model to data from Brazil. We calculate steady state equilibria as well as transition paths between pre- and post- reform steady states. We find that the efficiency gain from eliminating such policy induced early retirement in the public sector is substantial. Specifically, the policy reform, which decreases the generosity of public sector pensions, and simultaneously increases the minimum retirement age of civil servants from age 55 to 60, increases steady state private sector output by about 3%3% when labor tax rates adjust to clear the government budget. Apart from a grandfathering effect, transitions indicate a smooth monotone progression between steady state output levels. Welfare calculations indicate that private sector workers gain up to 3% of their average consumption while civil servants lose up to 10% of their average consumption from this reform. In addition, we find that effects of similar magnitude are obtained when the government uses alternative tax-financing instruments such as a capital income tax and a consumption tax to clear the government budget. We also find that the quantitative effects are fairly robust to changes in the parameters. The adverse effects of generous public pensions to civil servants have been neglected in the literature because of the assumption that this public pension scheme is relatively small and affects only the public sector workers, who represent only a small fraction of the labor force. The key contribution of this paper is to show that reforming the pension system of a small minority within the group of retirees can substantially change the productivity of an economy when accounting for all general equilibrium effects. We identify three general equilibrium channels that magnify the adverse effects of generous public sector pensions. First, the generosity of public sector pensions causes early retirement in the public sector, which reduces human capital available to the production of public goods. Second, the generosity of public sector pensions results in adverse effects on savings. Third, the generous public pension scheme is costly and has to be financed by taxes, which in turn influence capital accumulation, labor supply and income. The paper is organized as follows. The next section describes the model. In Section 2 we calibrate the model to Brazil and in Section 3 we conduct policy experiments. We conduct extensive sensitivity analysis for these policy reform experiments in Section 4. Section 5 concludes. The appendix contains the algorithm used to compute the equilibrium.

In this paper we have studied the adverse effects of extremely generous early retirement provisions for civil servants. We explored the effects of a pension reform for public sector workers on human capital available to public sector production, capital accumulation, the long run level of aggregate income, and on welfare. For this purpose we have used an OLG economy which was calibrated to data from Brazil in year 2000. We have conducted policy reforms that induced civil servants to postpone the age at which they retire. These policy reforms consist of decreasing replacement rates which do allow for sizable cuts in taxation and the enforcement of a minimum retirement age of 60. We found that these retirement policies ensure that civil servants postpone retirement by 5 years from age 55 to age 60 which raises aggregate steady state income by over 3%. The transition to the new steady states lasts about 100 years. The welfare gains to private sector employees of such policy reforms are large and exceed 3% of consumption. These welfare gains are relatively evenly distributed across the income distribution. Of course, civil servants stand to lose from such a reform. The computed welfare losses for some civil servants are as high as 10% of consumption. For the purpose of this analysis we have abstracted from the potentially important issue of population ageing. We have also abstracted from alternative uses of public funds released by these policy experiments such as higher public education expenditure or higher investment in infrastructure. We leave these issues for future research.