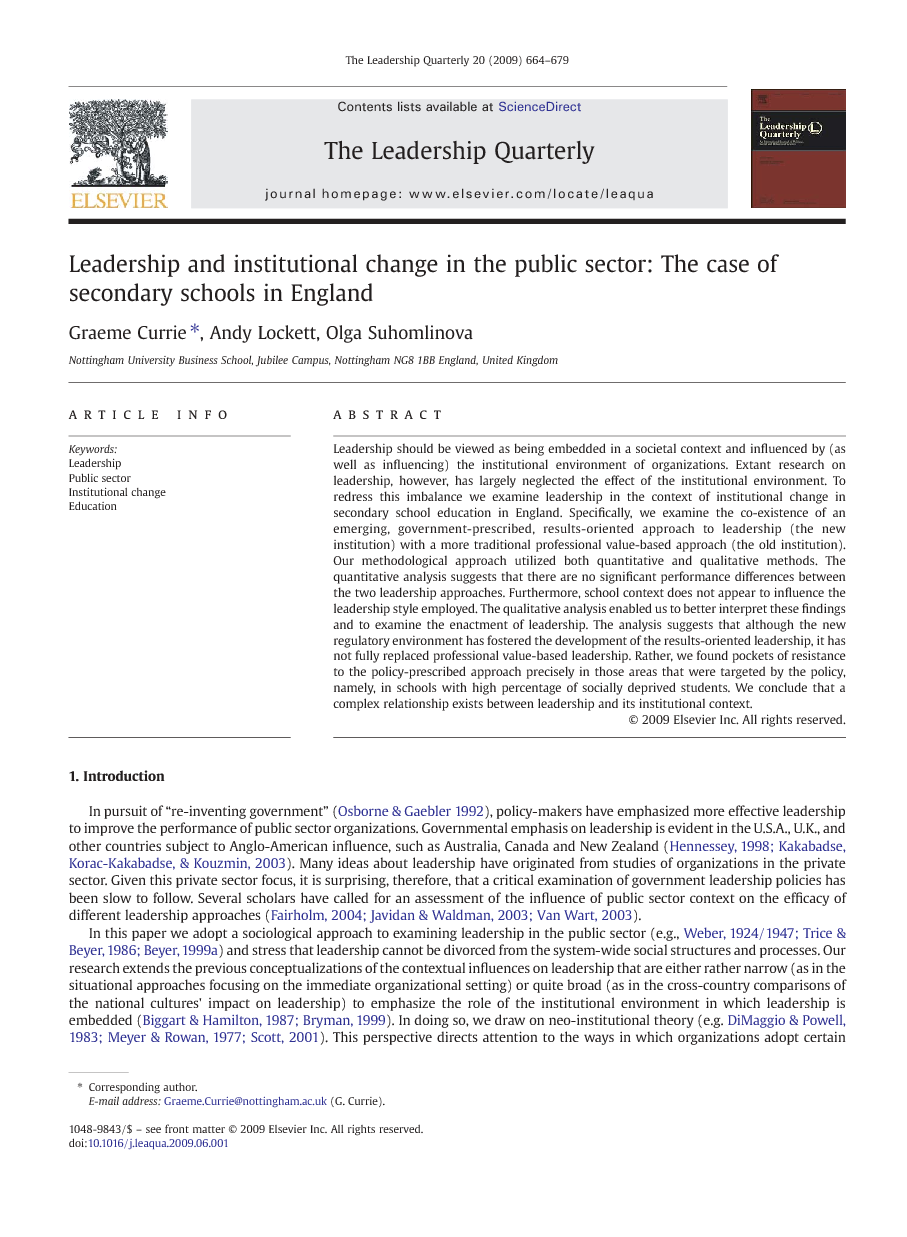 Leadership should be viewed as being embedded in a societal context and influenced by (as well as influencing) the institutional environment of organizations. Extant research on leadership, however, has largely neglected the effect of the institutional environment. To redress this imbalance we examine leadership in the context of institutional change in secondary school education in England. Specifically, we examine the co-existence of an emerging, government-prescribed, results-oriented approach to leadership (the new institution) with a more traditional professional value-based approach (the old institution). Our methodological approach utilized both quantitative and qualitative methods. The quantitative analysis suggests that there are no significant performance differences between the two leadership approaches. Furthermore, school context does not appear to influence the leadership style employed. The qualitative analysis enabled us to better interpret these findings and to examine the enactment of leadership. The analysis suggests that although the new regulatory environment has fostered the development of the results-oriented leadership, it has not fully replaced professional value-based leadership. Rather, we found pockets of resistance to the policy-prescribed approach precisely in those areas that were targeted by the policy, namely, in schools with high percentage of socially deprived students. We conclude that a complex relationship exists between leadership and its institutional context.

We conclude that leadership should be viewed as embedded in a societal context and as being influenced by, as well as influencing, the institutional environment of organizations. In this, we concur with the opinion of Uhl-Bien (2006, p. 654), expressed in this journal, that leadership is best theorized and examined empirically as “a process of social construction through which certain understandings of leadership come about and are given privileged ontology.” Multiple institutional logics can co-exist, and compete, in a field (Townley 2002). Transformation of an organizational field always entails a change in the field's institutional logic(s), with the old logic replaced or pushed to the margins by a new logic. Research on institutional transformation of organizational fields has so far focused on the processes of supplanting of the old institutions with the new ones. In contrast, we draw attention to the fact that, for a significant period after the introduction of a new institutional template, the old institutions remain in place and continue to influence, in conjunction with the new institution, the cognition and actions of organizational actors who enact leadership. Governments around the globe, in their quest to improve the public sector performance, attempt to influence, through regulation and education of public sector professionals, the behavior of the sector's leaders. Our study shows that governments do change behavior. However, their attempts to change behavior are not uniformly successful. Consequently, more attention needs to be devoted to the institutional context of leadership. In addition to focusing on coercive pressures, there is a need to focus on the normative and cultural-cognitive forces, which are much less receptive to governmental intervention. An institutional approach to leadership, in complement with more micro, individual and situational, and cultural approaches to leadership, can help to deal with these complex realities of leadership in the modern world.