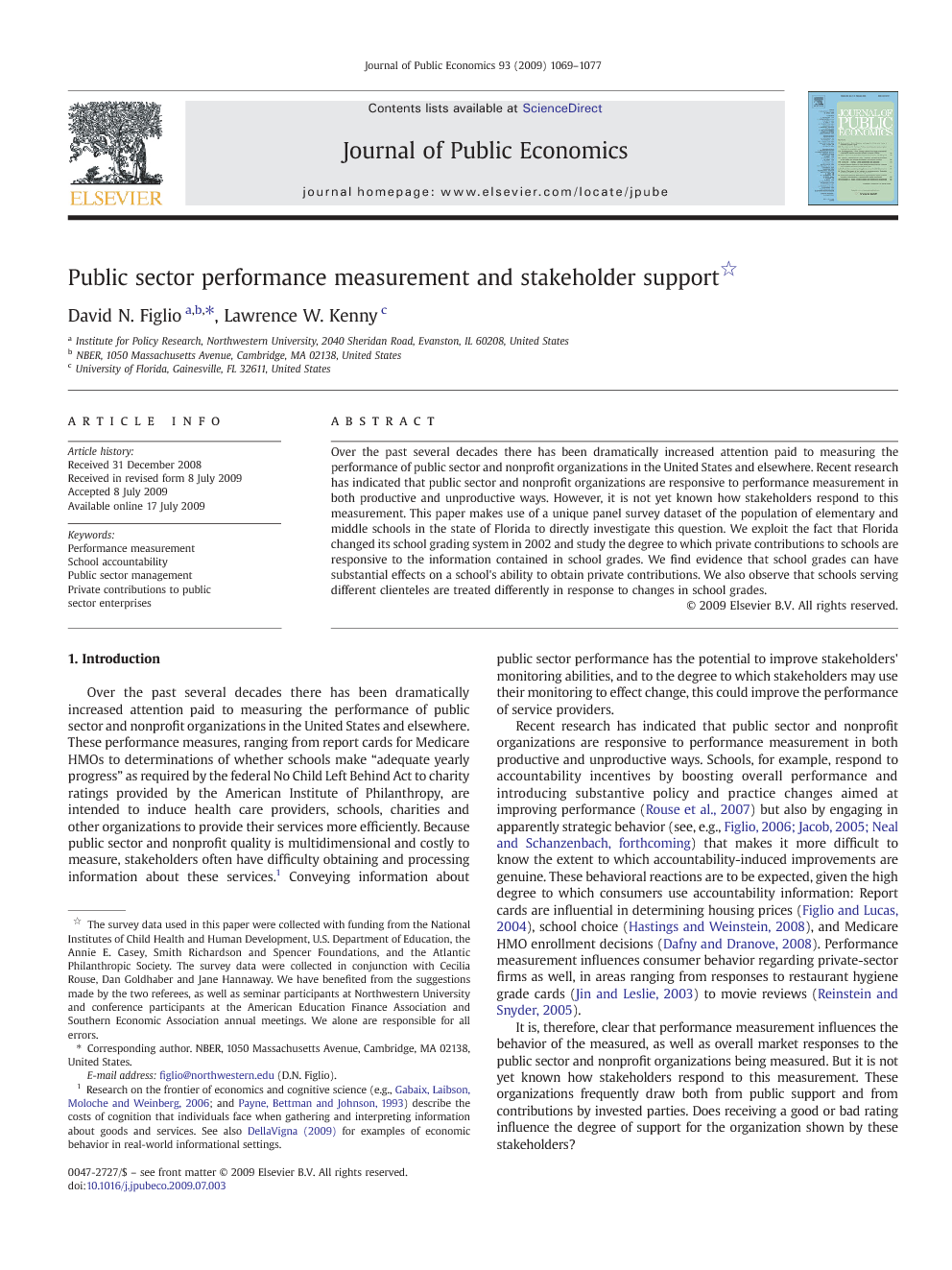 Over the past several decades there has been dramatically increased attention paid to measuring the performance of public sector and nonprofit organizations in the United States and elsewhere. Recent research has indicated that public sector and nonprofit organizations are responsive to performance measurement in both productive and unproductive ways. However, it is not yet known how stakeholders respond to this measurement. This paper makes use of a unique panel survey dataset of the population of elementary and middle schools in the state of Florida to directly investigate this question. We exploit the fact that Florida changed its school grading system in 2002 and study the degree to which private contributions to schools are responsive to the information contained in school grades. We find evidence that school grades can have substantial effects on a school's ability to obtain private contributions. We also observe that schools serving different clienteles are treated differently in response to changes in school grades.

Over the past several decades there has been dramatically increased attention paid to measuring the performance of public sector and nonprofit organizations in the United States and elsewhere. These performance measures, ranging from report cards for Medicare HMOs to determinations of whether schools make “adequate yearly progress” as required by the federal No Child Left Behind Act to charity ratings provided by the American Institute of Philanthropy, are intended to induce health care providers, schools, charities and other organizations to provide their services more efficiently. Because public sector and nonprofit quality is multidimensional and costly to measure, stakeholders often have difficulty obtaining and processing information about these services.1 Conveying information about public sector performance has the potential to improve stakeholders' monitoring abilities, and to the degree to which stakeholders may use their monitoring to effect change, this could improve the performance of service providers. Recent research has indicated that public sector and nonprofit organizations are responsive to performance measurement in both productive and unproductive ways. Schools, for example, respond to accountability incentives by boosting overall performance and introducing substantive policy and practice changes aimed at improving performance (Rouse et al., 2007) but also by engaging in apparently strategic behavior (see, e.g., Figlio, 2006, Jacob, 2005 and Neal and Schanzenbach, forthcoming) that makes it more difficult to know the extent to which accountability-induced improvements are genuine. These behavioral reactions are to be expected, given the high degree to which consumers use accountability information: Report cards are influential in determining housing prices (Figlio and Lucas, 2004), school choice (Hastings and Weinstein, 2008), and Medicare HMO enrollment decisions (Dafny and Dranove, 2008). Performance measurement influences consumer behavior regarding private-sector firms as well, in areas ranging from responses to restaurant hygiene grade cards (Jin and Leslie, 2003) to movie reviews (Reinstein and Snyder, 2005). It is, therefore, clear that performance measurement influences the behavior of the measured, as well as overall market responses to the public sector and nonprofit organizations being measured. But it is not yet known how stakeholders respond to this measurement. These organizations frequently draw both from public support and from contributions by invested parties. Does receiving a good or bad rating influence the degree of support for the organization shown by these stakeholders? This paper directly investigates this question. Making use of a unique panel survey dataset of the population of elementary and middle schools in the state of Florida, we study the degree to which private contributions to schools–typically collected via parent–teacher organizations–are responsive to the information contained in school grades. Beginning in 1999, Florida assigned letter grades to its public schools on the basis of measured school performance. We exploit the fact that in 2002 Florida dramatically changed its school grading system, generating an information “shock” that caused some schools to have better grades than they would have had under the previous system and other schools to have worse grades than would have otherwise occurred. To our knowledge, this is the first paper of its type: the closest research of which we're aware is Jin and Whalley's (2007) study of the expansion of US News and World Report's ranking system to cover a larger number of universities, in which they measure the effect of attention per se on state financial support of universities. That study, however, is addressing a fundamentally different question, as it does not identify the effect of placement in the ranking hierarchy. Brunner and Sonstelie (2003) utilize nonprofit tax return data to study the determination of voluntary contributions to schools in California in the aftermath of Proposition 13. They find greater total donations in larger schools and in schools serving richer and more educated families. However, their study describes the presence of voluntary contributions, rather than the response of contributions to performance measurement. And studying the response of contributions requires more detailed contributions data than tax return information, as the vast majority of schools receive sufficiently small amounts of donations that their parent–teacher organizations are not required to report contributions to the Internal Revenue Service. While this is not a serious issue for Brunner and Sonstelie's purposes, it renders tax return data useless for our purposes. One can only credibly study the effects of accountability on contributions using survey data, and the survey that we utilize is, to our knowledge, the first of its kind. We find evidence that receiving a high school grade, conditional on past grading performance, does not increase the level of voluntary contributions to the school, but receiving a low grade is associated with considerable reductions in private financial support for the school. Indeed, we estimate that a school that receives a grade of “F”–the lowest in the state's system–will experience a drop in contributions of two-thirds or more, and a school that receives a grade of “D” also will experience a substantial reduction in contributions. In other words, stakeholder support, at least in the short run, is negatively impacted by receipt of a poor performance measurement score. We also observe that donations to schools serving poor or minority families are more sensitive to school grades than donations to schools serving more affluent families. Our results provide empirical support to models (e.g., Vesterlund, 2003 and Landry et al., 2006) that predict that donations respond to signals of charity quality such as well publicized initial contributions. A related literature (e.g., Sloan, 2009 and Chhaochharia and Ghosh, 2008) has found that charities that receive more favorable accountability ratings by groups such as the Better Business Bureau's Wise Giving Alliance get more contributions. A charity's overhead rate may provide evidence on how efficiently it is operated. Although the evidence is mixed (see Bowman, 2006, pp. 293–294), the preponderance of evidence suggests that less money is donated to charities with higher expense ratios. These results are consistent with our finding that less money is contributed to poorly run schools. Donors seem reluctant to throw good money at inefficient organizations. This withdrawal of support may provide another incentive for poorly-measured public and nonprofit organizations to improve their measured performance.