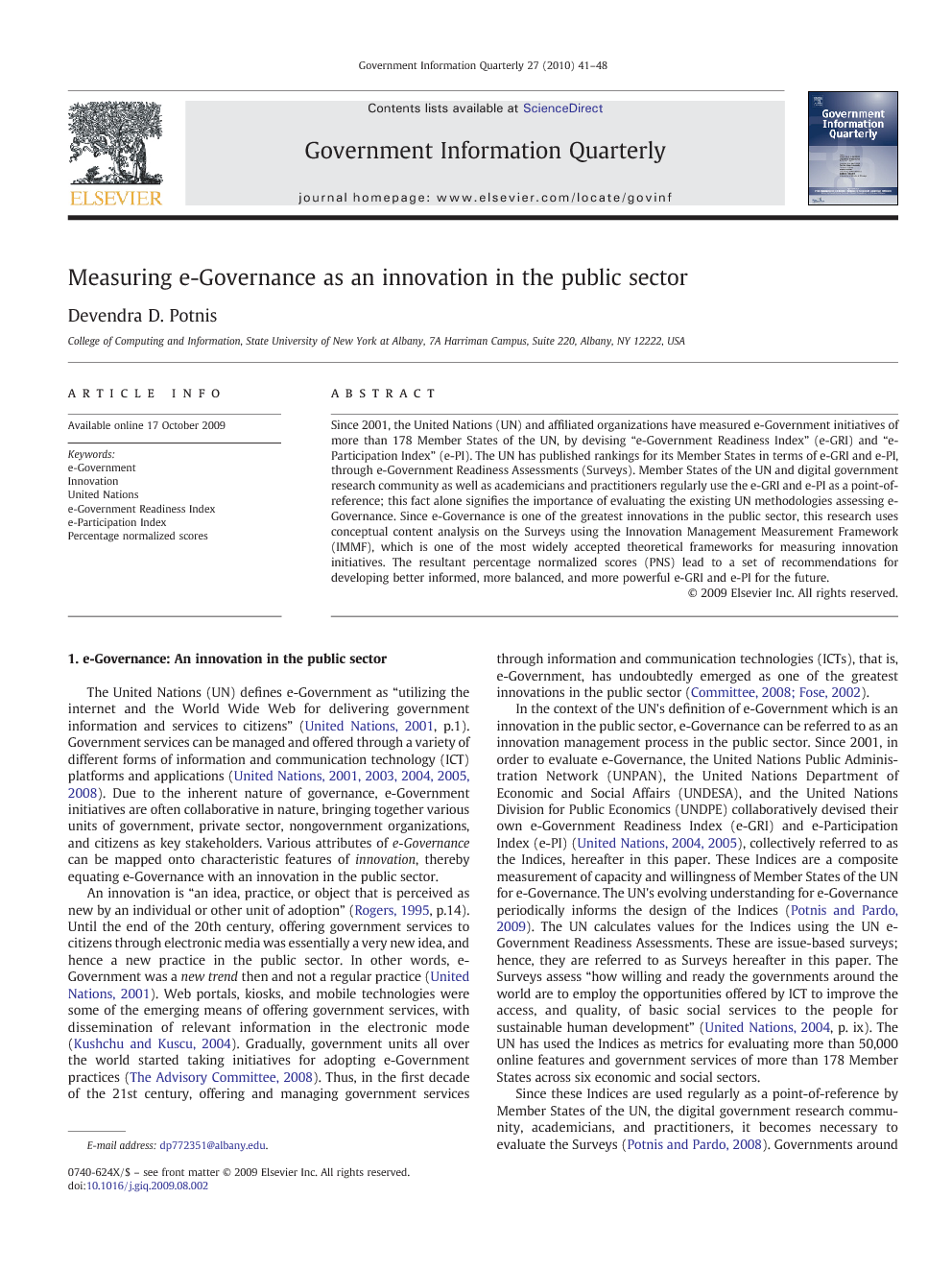 Since 2001, the United Nations (UN) and affiliated organizations have measured e-Government initiatives of more than 178 Member States of the UN, by devising “e-Government Readiness Index” (e-GRI) and “e-Participation Index” (e-PI). The UN has published rankings for its Member States in terms of e-GRI and e-PI, through e-Government Readiness Assessments (Surveys). Member States of the UN and digital government research community as well as academicians and practitioners regularly use the e-GRI and e-PI as a point-of-reference; this fact alone signifies the importance of evaluating the existing UN methodologies assessing e-Governance. Since e-Governance is one of the greatest innovations in the public sector, this research uses conceptual content analysis on the Surveys using the Innovation Management Measurement Framework (IMMF), which is one of the most widely accepted theoretical frameworks for measuring innovation initiatives. The resultant percentage normalized scores (PNS) lead to a set of recommendations for developing better informed, more balanced, and more powerful e-GRI and e-PI for the future.

The research study proposes that e-Governance is an innovation in the public sector. Resources invested in any innovation can be managed optimally only if innovation management process is evaluated effectively (Adams et al., 2006). In the context of the UN's definition of e-Government, e-Governance can be referred to as an innovation management process in the public sector. Since 2001, in order to evaluate e-Governance, various UN agencies collaboratively devised the Indices to assess capacity and willingness of Member States of the UN, practicing e-Governance. Since these Indices are used regularly by Member States of the UN, the digital government research community, academicians, and practitioners as a point-of-reference, it becomes necessary to evaluate the assessments of e-Government initiatives of Member States of the UN (Potnis and Pardo, 2008). With the help of Innovation Management Measurement Framework (IMMF), one of the most widely used and comprehensive framework to evaluate innovation, the research runs a conceptual content analysis on the Surveys, to measure the degree to which the existing Surveys assess innovation in e-Government initiatives of Member States of the UN. Thus, this study demonstrates a new way of analyzing the existing e-Readiness assessment practices of the UN, and proposes a set of recommendations to improve the existing UN practices. The first recommendation underlines the need to balance criteria assessing hard and soft components of e-Governance and proposes a solution to achieve it by narrowing the gap between PNS for Project Management and Knowledge Management from the IMMF. The second recommendation offers a solution to better equip the UN for assessing capabilities of Member States, which are shaped by their willingness for empowering their citizens with knowledge and information required for e-Participation. The third recommendation has a message of elevating the equity in the UN e-Readiness rankings. The fourth recommendation includes applications of NPV, BEV, and ROI as criteria to evaluate the success in terms of efficiency of e-Government initiatives. Since effective and efficient knowledge management is the backbone for any Knowledge-based Society, the fifth recommendation expects the Surveys to build a metric for assessing effectiveness and efficiency of knowledge management achieved through e-Governance in more than 178 Member States of the UN. The sixth recommendation focuses on maintaining a consistency among a series of Surveys in order to maintain the current position of the Indices as a point-of-reference in the digital government community. Since the UN's ways of measuring e-Government initiatives set a benchmark for many nations' efforts to offer e-Governance, all Member States of the UN would benefit, if the UN refines its existing e-Readiness assessment practices. This could be partly achieved by considering the above set of recommendations, which are derived with the help of IMMF (7 constructs and 19 subconstructs). In the future, incorporation of PNS based on IMMF, with the existing e-Government readiness practices could play an instrumental role in developing better informed, more balanced, and more powerful Indices, potentially benefiting all the stakeholders involved in the pervasive movement of digital governance.