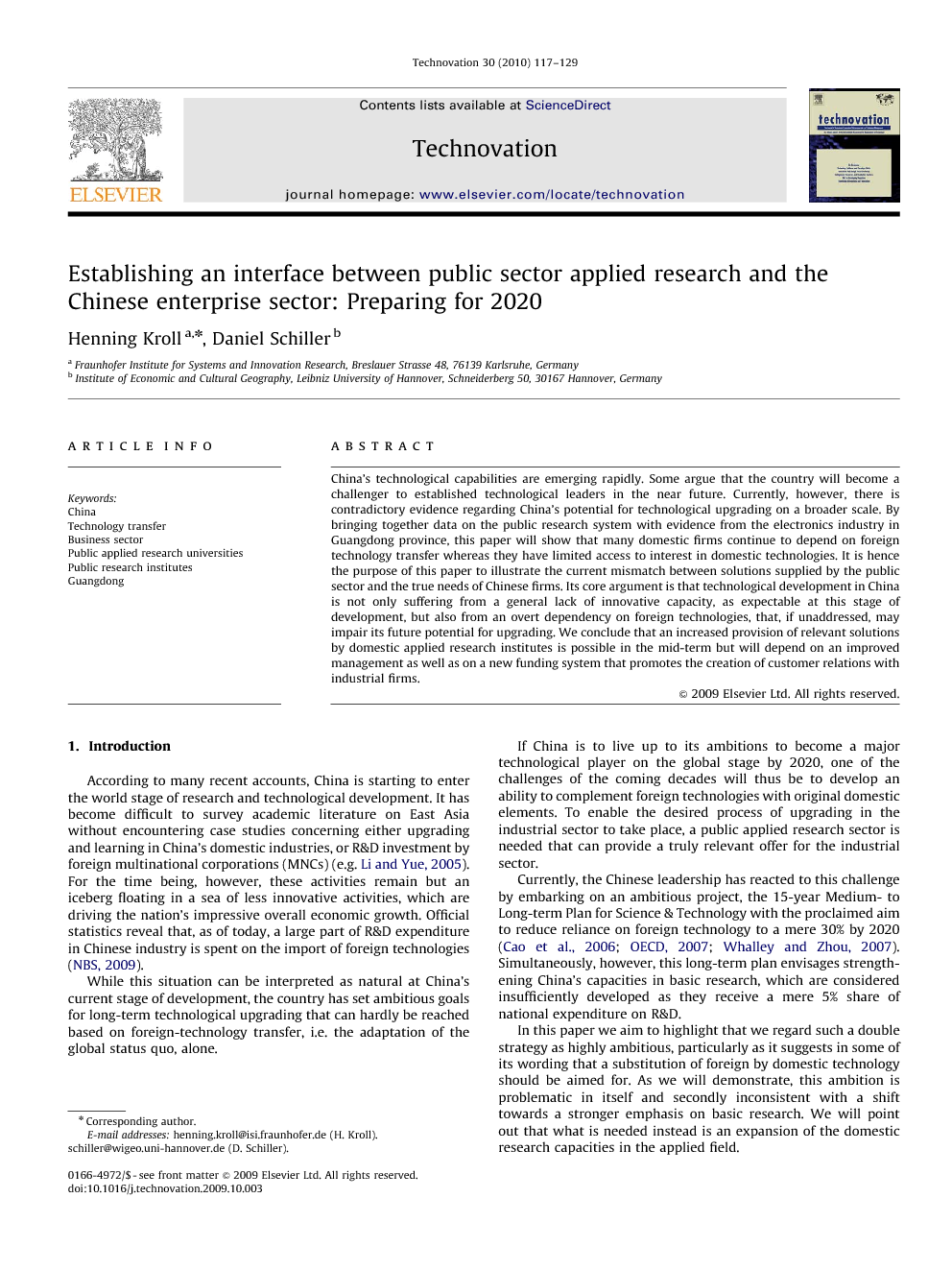 China’s technological capabilities are emerging rapidly. Some argue that the country will become a challenger to established technological leaders in the near future. Currently, however, there is contradictory evidence regarding China’s potential for technological upgrading on a broader scale. By bringing together data on the public research system with evidence from the electronics industry in Guangdong province, this paper will show that many domestic firms continue to depend on foreign technology transfer whereas they have limited access to interest in domestic technologies. It is hence the purpose of this paper to illustrate the current mismatch between solutions supplied by the public sector and the true needs of Chinese firms. Its core argument is that technological development in China is not only suffering from a general lack of innovative capacity, as expectable at this stage of development, but also from an overt dependency on foreign technologies, that, if unaddressed, may impair its future potential for upgrading. We conclude that an increased provision of relevant solutions by domestic applied research institutes is possible in the mid-term but will depend on an improved management as well as on a new funding system that promotes the creation of customer relations with industrial firms.

According to many recent accounts, China is starting to enter the world stage of research and technological development. It has become difficult to survey academic literature on East Asia without encountering case studies concerning either upgrading and learning in China's domestic industries, or R&D investment by foreign multinational corporations (MNCs) (e.g. Li and Yue, 2005). For the time being, however, these activities remain but an iceberg floating in a sea of less innovative activities, which are driving the nation's impressive overall economic growth. Official statistics reveal that, as of today, a large part of R&D expenditure in Chinese industry is spent on the import of foreign technologies (NBS, 2009). While this situation can be interpreted as natural at China's current stage of development, the country has set ambitious goals for long-term technological upgrading that can hardly be reached based on foreign-technology transfer, i.e. the adaptation of the global status quo, alone. If China is to live up to its ambitions to become a major technological player on the global stage by 2020, one of the challenges of the coming decades will thus be to develop an ability to complement foreign technologies with original domestic elements. To enable the desired process of upgrading in the industrial sector to take place, a public applied research sector is needed that can provide a truly relevant offer for the industrial sector. Currently, the Chinese leadership has reacted to this challenge by embarking on an ambitious project, the 15-year Medium- to Long-term Plan for Science & Technology with the proclaimed aim to reduce reliance on foreign technology to a mere 30% by 2020 (Cao et al., 2006; OECD, 2007; Whalley and Zhou, 2007). Simultaneously, however, this long-term plan envisages strengthening China's capacities in basic research, which are considered insufficiently developed as they receive a mere 5% share of national expenditure on R&D. In this paper we aim to highlight that we regard such a double strategy as highly ambitious, particularly as it suggests in some of its wording that a substitution of foreign by domestic technology should be aimed for. As we will demonstrate, this ambition is problematic in itself and secondly inconsistent with a shift towards a stronger emphasis on basic research. We will point out that what is needed instead is an expansion of the domestic research capacities in the applied field. A key problem is that, at the current stage, dependence on international sourcing makes perfect economic sense for many multinational enterprises that are embedded in corporate networks, as well as for the increasingly internationalising Chinese firms. We will therefore illustrate that from the firm side a substitution of technology imports by domestic technology does, in many cases, not appear to be desirable—or at least is factually not aimed at. Moreover, as a result of its transitional legacy, the Chinese innovation system is characterised by fragmentation and an organisational mismatch between its main domestic players. Secondly, we will therefore show that the current public research sector is structurally ill prepared to provide the output that would be needed to satisfy the demands of the industrial firms. Firstly, Chinese universities are continuously moving towards an extended role that includes providing applied R&D. Nonetheless, their key task is to fulfil a major role with regard to the improvement of the human capital base that will limit their possible contribution to the system of domestic technology transfer. Secondly, however, there are a number of public research institutes whose formal role has always been to develop technologies for industry, which in practice they were often unable to. During transition, therefore, the system was substantially downsized, so that those institutes that still exist today can be considered able to survive and—comparatively—open to change. These institutes are currently re-adjusting their strategies and are the key addressees of the policy conclusions in this paper. This paper will therefore illustrate that there are a number of reasons why, other than in technologically leading nations, Chinese enterprises do not source technological solutions from domestic institutes to a relevant extent. Additionally, however, it will point out that we see potential in these institutes if structural changes are realised that encourage them to establish cooperations with industry. In the following, we will thus try to take a mediating position between overly optimistic attempts to establish an endogenous innovation system based on domestic technologies for which we currently see no basis and a rather passive approach that leaves technological upgrading to international technology transfer forever. Taking into account the current framework conditions, the following conceptual section will argue that a domestic nexus of R&D cooperation and knowledge exchange as known from other countries (cf. e.g. Abramo et al., 2009; Hoye and Pries, 2009; Fukugawa, forthcoming) does not evolve automatically and that R&D cooperation can only develop based on the mutual relevance of activities in the public research and the industrial sector. Likewise, it will have to be supported by targeted policy action (Rasmussen, 2008; Shapira and Wang, 2009). As shown for the case of Thailand, this is especially relevant for nascent innovation systems (Schiller, 2006).