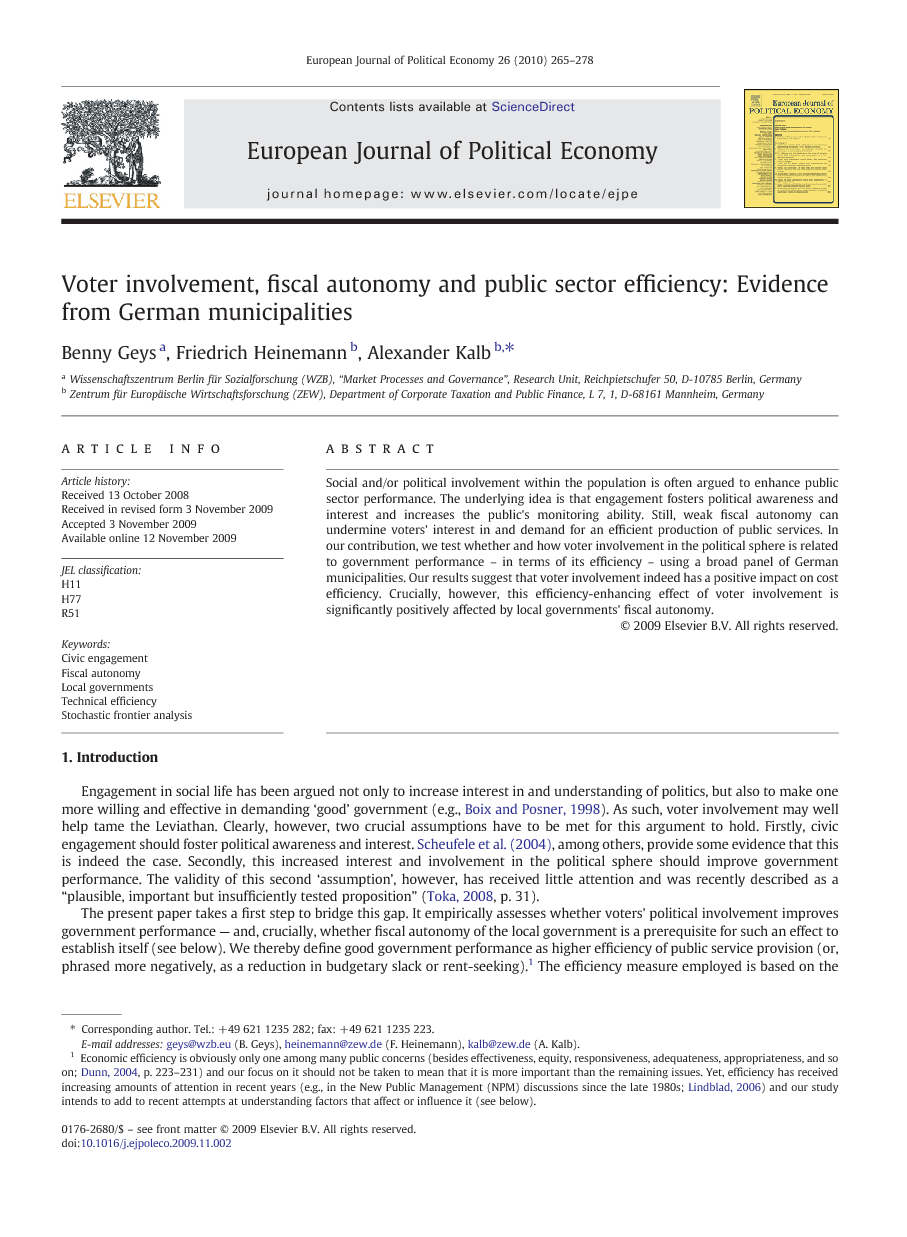 Social and/or political involvement within the population is often argued to enhance public sector performance. The underlying idea is that engagement fosters political awareness and interest and increases the public's monitoring ability. Still, weak fiscal autonomy can undermine voters' interest in and demand for an efficient production of public services. In our contribution, we test whether and how voter involvement in the political sphere is related to government performance – in terms of its efficiency – using a broad panel of German municipalities. Our results suggest that voter involvement indeed has a positive impact on cost efficiency. Crucially, however, this efficiency-enhancing effect of voter involvement is significantly positively affected by local governments' fiscal autonomy.

Engagement in social life has been argued not only to increase interest in and understanding of politics, but also to make one more willing and effective in demanding ‘good’ government (e.g., Boix and Posner, 1998). As such, voter involvement may well help tame the Leviathan. Clearly, however, two crucial assumptions have to be met for this argument to hold. Firstly, civic engagement should foster political awareness and interest. Scheufele et al. (2004), among others, provide some evidence that this is indeed the case. Secondly, this increased interest and involvement in the political sphere should improve government performance. The validity of this second ‘assumption’, however, has received little attention and was recently described as a “plausible, important but insufficiently tested proposition” (Toka, 2008, p. 31). The present paper takes a first step to bridge this gap. It empirically assesses whether voters' political involvement improves government performance — and, crucially, whether fiscal autonomy of the local government is a prerequisite for such an effect to establish itself (see below). We thereby define good government performance as higher efficiency of public service provision (or, phrased more negatively, as a reduction in budgetary slack or rent-seeking).1 The efficiency measure employed is based on the public sector as a whole, rather than on a given area of public good provision: e.g., waste collection, administration, road maintenance, and so on (e.g., Kalseth and Rattsø, 1998 and De Borger and Kerstens, 2000). This ‘global’ approach is appropriate when “the explanatory variables characterize the local government institution rather than being sector-specific” (Borge et al., 2008, p. 476) — as is here the case. In such a setting, concentrating on “one particular element of service provision may be inadequate (or even misleading)” (Ashworth et al., 2007, p. 12). While numerous studies examine local government efficiency and its determinants (e.g., De Borger et al., 1994, De Borger and Kerstens, 1996, Worthington, 2000, Geys, 2006, Balaguer-Coll et al., 2007, Bruns and Himmler, 2009, Geys and Moesen, 2009a and Geys and Moesen, 2009b), only one of these includes a measure of political involvement (i.e., Borge et al., 2008).2 The latter study illustrates that the public's democratic participation tends to improve efficiency – in line with theoretical predictions – even after controlling for numerous political, fiscal and budgetary variables. The present study intends to add to our understanding of the participation-efficiency nexus by diverging from and/or extending upon Borge et al. (2008) in four main ways. ▪ First, and purely methodologically, we exploit a stochastic frontier approach to measure efficiency (cf. Aigner et al., 1977 and Meeusen and van den Broeck, 1977), whereas Borge et al. (2008) rely on the ratio between aggregate output and local government revenue. Our approach, although itself imperfect (see below), has the benefit of allowing a distinction between measurement error and inefficiency. ▪ Second, our empirical analysis is based on a broad panel of German municipalities (rather than Norwegian municipalities; cf. Borge et al., 2008). As a result, we have a larger dataset at our disposal including across-time variation in crucial variables. Moreover, it implies that we analyze the participation-efficiency nexus in a different political and institutional setting — making our results interesting also from a comparative perspective. ▪ Third, we assess a broad set of indicators of voter involvement — thus going beyond electoral turnout as a measure of citizen involvement (as in Borge et al., 2008). As such, we are able to examine how different ways through which voters can get politically involved affect government performance. ▪ Finally, and most importantly, we are – to the best of our knowledge – the first to assess how the participation-efficiency nexus is affected by the degree of local fiscal autonomy. Building on the fiscal illusion literature, fiscal autonomy (in contrast to dependence on external grants) may be seen as a crucial intervening variable since it implies that voters are effectively confronted with the tax bill for their desires. As a result, we argue that an active citizenry is more likely to value the careful use of public money when it originates mainly from own revenue sources rather than external transfers. The remainder of the article is structured in four main parts. The first of these presents the theoretical background and our main hypotheses. Section 3 then introduces the German institutional and political setting. The empirical analysis is provided in Section 4. We show that voter involvement is indeed linked to increased government cost efficiency and that, in line with theoretical predictions, this effect is stronger in communities with higher fiscal autonomy. Finally, Section 5 reiterates the main findings and discusses some implications.

In this paper we investigate the relation between voter involvement and local jurisdictions' cost efficiency. While higher social and political involvement within the population is often argued to be beneficial for the performance of the public sector, it remains unclear from a theoretical point of view whether higher voter involvement necessarily results in a higher or lower performance of (local) governments. One reason is that voters may only care about the careful use of public money when it originates from own (tax) revenue sources rather than external transfers. As a consequence, high voter involvement is more likely to result in better (or more efficient) performance only in municipalities with a high – rather than low – degree of fiscal autonomy. Our empirical analysis – using a broad panel of 987 German municipalities for the years 1998, 2002 and 2004 – illustrates that higher voter involvement is on the whole associated with higher rather than lower levels of cost efficiency. This conclusion is in line with previous findings by Borge et al. (2008) for Norwegian municipalities — despite the differences in institutional setting, methodological approach and measurement of government efficiency between their study and ours. Compared to their results, however, our analysis allows for two more detailed conclusions. First, we find that this positive relation between voter involvement and government efficiency is supported also for measures of involvement other than voter turnout: i.e. the presence of free voter unions in the local council, and the ratio of eligible voters to total population. Interestingly, the effect is found to be weakest for voter turnout. Second, and crucially, our results reveal that this positive relation between voter involvement and government efficiency is not automatic. Rather, it is stronger when the degree of fiscal autonomy of the municipality is higher. As a consequence, stimulating civic engagement in politics is especially desirable when the institutional setting is such that the fiscal burden of public policies falls on those voting for these policies (i.e. a high degree of fiscal equivalence; cf. Olson, 1969). In future research, it would be of interest to replicate the current study using data from specific government outputs. Although we do not necessarily believe that the relation we observe for the local government sector as a whole must necessarily also be present for each and every government output independently, it would certainly be interesting to analyze for which government sectors the relation uncovered in our analysis holds and for which it does not. Such a cross-policy approach would also allow assessing what drives these differences and for which policy areas voter involvement and fiscal autonomy are critical. While proper caution is due when drawing policy implications from our analysis (given that we are forced to rely on proxies for voter involvement), our results clearly provide some food for thought. At first sight, they suggest that one should try to encourage citizens to be more active in the political process (e.g., via casting a ballot). Indeed, higher levels of voter involvement on the whole increase government performance. This is, however, not an easy route to take. Voter involvement in Baden-Württemberg (as elsewhere) is de facto decreasing. For example, in the period considered here voter turnout in local council elections fell from approximately 67% in 1994 to 52% in 2004. A more detailed reading of our results, however, shows that this is not the only way to increase local government performance. Indeed, an alternative route is to increase the degree of local governments' fiscal (or revenue) autonomy. Our results suggest that the effect of voter involvement is stronger in fiscally more autonomous (and therefore less dependent on external transfers) municipalities. Even though actual involvement declines (see above), higher budgetary slack can then still be avoided by making municipalities depend to a stronger degree on own funding. In such a setting, an active citizenry will put more weight on the careful use of public money.