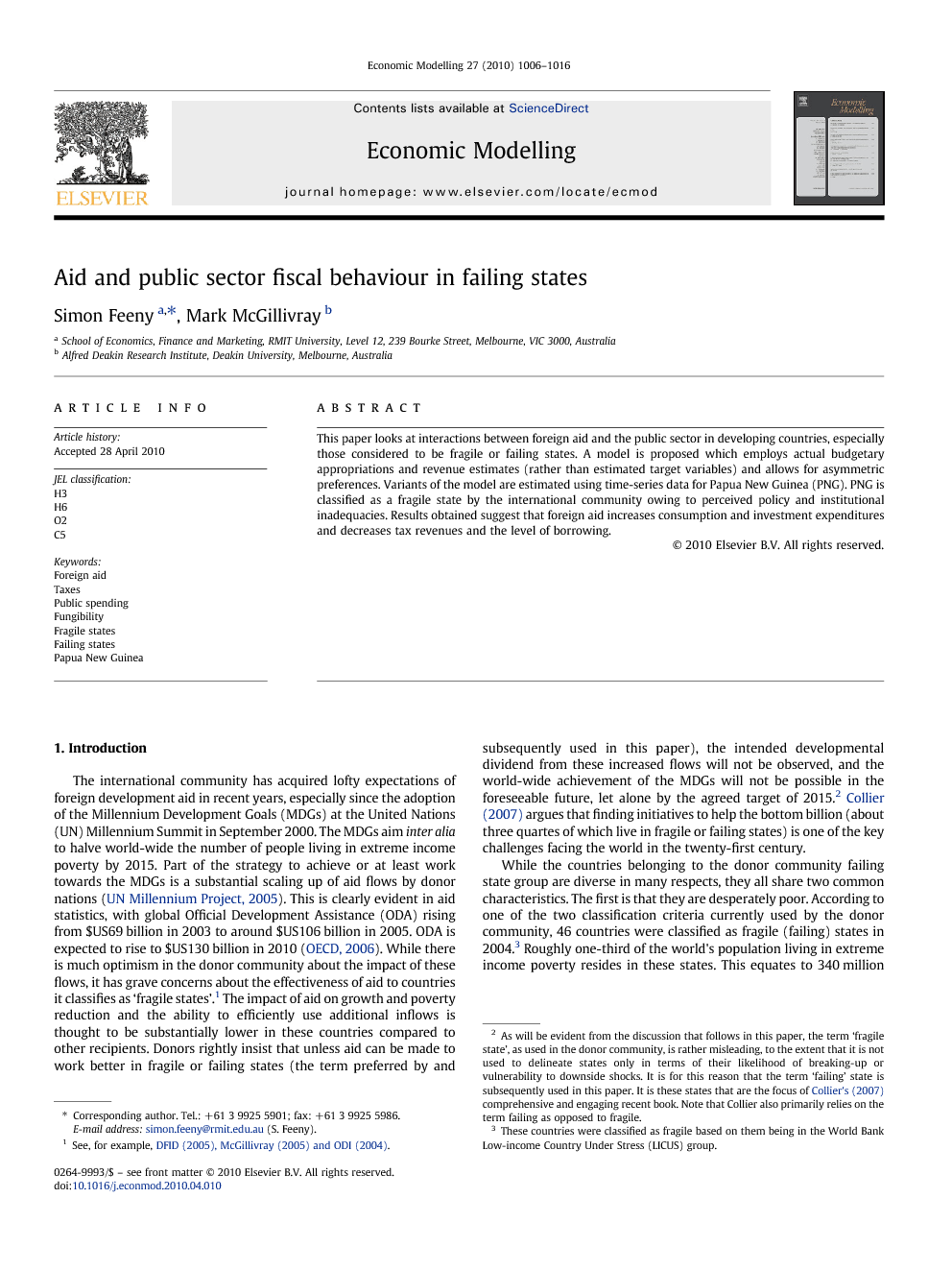 This paper looks at interactions between foreign aid and the public sector in developing countries, especially those considered to be fragile or failing states. A model is proposed which employs actual budgetary appropriations and revenue estimates (rather than estimated target variables) and allows for asymmetric preferences. Variants of the model are estimated using time-series data for Papua New Guinea (PNG). PNG is classified as a fragile state by the international community owing to perceived policy and institutional inadequacies. Results obtained suggest that foreign aid increases consumption and investment expenditures and decreases tax revenues and the level of borrowing.

Aid flows are an important component of the public sector budgets of most developing countries. A greater understanding of the interactions between aid and various categories of public sector expenditure and revenue is required if aid is to contribute further to economic growth and the achievement of the internationally agreed MDGs. This paper has sought to contribute to this understanding in two ways. The first was to further improve the aid-fiscal behaviour literature by addressing two key, widely acknowledged weaknesses in fiscal response models. This involved building a model that allows for asymmetric fiscal decision maker preferences and uses expenditure appropriations and revenue estimates rather than vaguely defined and statistically generated targets. The second contribution was to apply this model to Papua New Guinea (PNG), using 1969 to 2000 annual time-series data. As outlined above, PNG is a particularly interesting case study. It is a country that has experienced many economic, political and social difficulties, despite receiving relatively large amounts of aid. It has recently been classified as a fragile state by the international donor community, in part based on perceptions that it has a weak and ineffective public sector. It is also a country that is generally considered to have not used aid especially effectively, and the Australian government (the largest donor of aid to PNG) has responded to this and the general state of affairs in PNG in a rather radical manner by placing its own civil servants in key positions in the PNG's public sector. The results obtained from applying the fiscal response model to PNG paint a picture of a poorly performing public sector that has not used aid and other revenues especially well and worse than many other countries examined in the literature. Consistently high proportions of taxes and other recurrent revenue, aid and non-aid borrowing are allocated to consumption expenditure and there is evidence of aid loans financing unanticipated shortfalls in the recurrent budget and of aid displacing other recurrent revenue. There were some pleasing results, with aid being positively associated with fixed investment and non-aid borrowing but the overall picture of the effectiveness of aid to PNG is relatively poor. This is not at all to say that aid has failed PNG, in that it has failed to contribute to growth and by assumption poverty reduction. Indeed, there is evidence from the aid-growth literature that growth in PNG would be lower in the absence of aid. But it does suggest that the manner in which the PNG public sector has used aid has limited the overall effectiveness of these inflows in promoting growth and more importantly reducing poverty. To these extents there would appear to be empirical support for the radical Australian intervention mentioned at the outset of this paper. Time will, of course, be the ultimate judge as to its success. Finally, some comments on the impact of aid on public sector fiscal aggregates in failing states in general and for donor policy are warranted. Here we rely not only on the results reported in this study, but also on the findings from other studies examining aid and the public sector in failing states, cited above. These comments relate to failing states that are similar to PNG in this regard, and not to those without any functioning public sector. Clearly, the results reported in this paper and the other studies will not be relevant to such states. These results suggest that failing states are characterised by using non-aid borrowing to fund recurrent budgets. Findings also suggest that these states use aid as a substitute for taxation and other recurrent revenue: these revenues decrease in response to aid inflows. Donors need to be conscious of both outcomes in the design and delivery of aid programs to failing states. The former we interpret as the result of unexpected shortfalls in revenues. Such behaviour could be justified as a response to a revenue decline if it means that essential expenditures such as the delivery of key services are maintained. However, in the longer term, this justification would appear to be difficult to support. Public sector borrowing needs to be repaid, increasing the level of debt and a country's future debt service obligations. Given the political instability and future uncertainty often associated with failing states, politicians currently holding office might be more disposed to undertaking such borrowing. The preceding finding also highlights the need to accurately forecast revenue estimates. Overly optimistic estimates of expected revenue will exacerbate the problem of public sectors not being able to meet their expenditure appropriations. Donors could assist in strengthening the ability of public sectors to undertake this exercise effectively. Further donors must be sympathetic to the financial requirements of public sectors which have experienced external shocks. Natural disasters and unexpected falls in the prices of key commodities can derail good public sector financial management. Donors should ensure their own aid flows are predictable and could supplement other unexpected revenue shortfalls to prevent higher levels of commercial borrowing. The finding that taxation and other recurrent revenues fall in response to aid inflows in failing states is a potentially serious matter for international aid donors. Trade liberalisation conditions, sometimes attached to the receipt of foreign aid could, at least partially, explain this finding. However, the finding is also likely to reflect recipients developing a long-run dependence on aid inflows as a revenue source. Failing states often have low revenue bases and sometimes a weak commitment or limited ability to collect taxes. To mitigate this impact of foreign aid it is important for international donors to work with recipient public sectors in strengthening revenue collection and management.