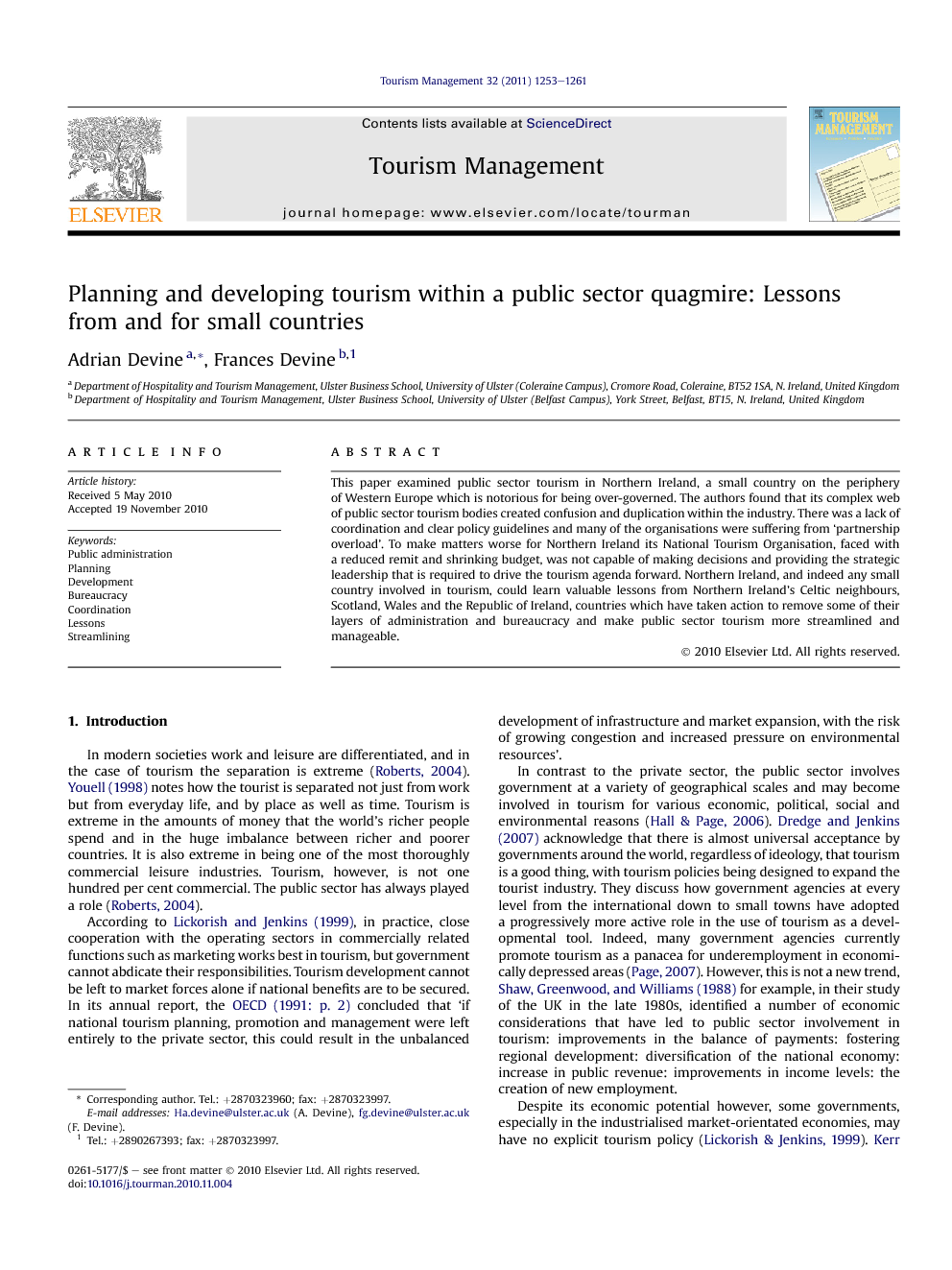 This paper examined public sector tourism in Northern Ireland, a small country on the periphery of Western Europe which is notorious for being over-governed. The authors found that its complex web of public sector tourism bodies created confusion and duplication within the industry. There was a lack of coordination and clear policy guidelines and many of the organisations were suffering from ‘partnership overload’. To make matters worse for Northern Ireland its National Tourism Organisation, faced with a reduced remit and shrinking budget, was not capable of making decisions and providing the strategic leadership that is required to drive the tourism agenda forward. Northern Ireland, and indeed any small country involved in tourism, could learn valuable lessons from Northern Ireland’s Celtic neighbours, Scotland, Wales and the Republic of Ireland, countries which have taken action to remove some of their layers of administration and bureaucracy and make public sector tourism more streamlined and manageable.

In modern societies work and leisure are differentiated, and in the case of tourism the separation is extreme (Roberts, 2004). Youell (1998) notes how the tourist is separated not just from work but from everyday life, and by place as well as time. Tourism is extreme in the amounts of money that the world’s richer people spend and in the huge imbalance between richer and poorer countries. It is also extreme in being one of the most thoroughly commercial leisure industries. Tourism, however, is not one hundred per cent commercial. The public sector has always played a role (Roberts, 2004). According to Lickorish and Jenkins (1999), in practice, close cooperation with the operating sectors in commercially related functions such as marketing works best in tourism, but government cannot abdicate their responsibilities. Tourism development cannot be left to market forces alone if national benefits are to be secured. In its annual report, the OECD (1991: p. 2) concluded that ‘if national tourism planning, promotion and management were left entirely to the private sector, this could result in the unbalanced development of infrastructure and market expansion, with the risk of growing congestion and increased pressure on environmental resources’. In contrast to the private sector, the public sector involves government at a variety of geographical scales and may become involved in tourism for various economic, political, social and environmental reasons (Hall & Page, 2006). Dredge and Jenkins (2007) acknowledge that there is almost universal acceptance by governments around the world, regardless of ideology, that tourism is a good thing, with tourism policies being designed to expand the tourist industry. They discuss how government agencies at every level from the international down to small towns have adopted a progressively more active role in the use of tourism as a developmental tool. Indeed, many government agencies currently promote tourism as a panacea for underemployment in economically depressed areas (Page, 2007). However, this is not a new trend, Shaw, Greenwood, and Williams (1988) for example, in their study of the UK in the late 1980s, identified a number of economic considerations that have led to public sector involvement in tourism: improvements in the balance of payments: fostering regional development: diversification of the national economy: increase in public revenue: improvements in income levels: the creation of new employment. Despite its economic potential however, some governments, especially in the industrialised market-orientated economies, may have no explicit tourism policy (Lickorish & Jenkins, 1999). Kerr (2003), for example, in his study of tourism policy in Scotland, found that in comparison to other industries tourism was less of a government public policy priority than other sectors. This was due to the general approach of successive UK governments. Although they accepted that there was a need for administration and funding support for the tourism industry, they minimised and marginalised the formal development support roles. Although there may be occasions when they appear unsupportive, unimaginative, uncooperative, discouraging or preoccupied with other disciplines, the tourism industry could not survive without government intervention. Governments, after all, have the necessary and legitimate power to provide the political stability, social infrastructure, security and the legal and financial framework to smooth the progress and development of tourism (Dredge & Jenkins, 2007). How governments use such powers and how they devise and implement policy and assess its impact will depend upon many factors including their political culture, socio-economic issues, environmental outlook, the political and economic power holders/brokers and, of course, their perception of tourism on their economy and society. Furthermore, such policies will be influenced by the political philosophies and ideological preferences of the government of the day and the minister in charge, combined with the wider political environment in which they find themselves (Edgell, 1999). The International Union of Tourism Organisations (1974), the forerunner to the World Tourism Organisation, in its discussion of the role of the state in tourism, identified five areas of public sector involvement in tourism: coordination, planning, legislation, regulation and entrepreneur stimulation. Hall and Page (2006) have added two other functions to this list: a social tourism role, which is very significant in European tourism, and a broader role of interest protection. All seven functions are important and although Governments may not spend huge sums of money on tourism compared with their spending on health education, pensions and defence for example, the public sector has a vital role to play in tourism. The private sector recognises this and throughout the world industry representatives lobby central, regional and local government, demanding increased public sector support. Many governments have responded and in some countries, this has lead to an increase in the number of public sector agencies with a tourism remit. However, whilst any recognition of the industry is commendable, is it possible for a country to have too many public sector agencies involved in tourism, and if so, what affect does this have on tourism development? This paper will address this issue by examining public sector tourism in Northern Ireland, a small country on the periphery of Western Europe which is notorious for being over-governed (Knox & Carmichael, 2006). The first section of this paper will provide a brief insight into Northern Ireland’s political history which will help explain why the country has become over-administered. The next section looks specifically at Northern Ireland’s tourism industry and identifies the area of study. This is followed by the methodology which also introduces the public sector agencies in Northern Ireland which have a tourism remit. The discussion is also broken down into two parts, the first deals with the problems that over-administration has created whilst the second discusses the lessons Northern Ireland can learn from other small countries.

According to Jenkins (2006) public sector intervention in tourism is generally linked to some form of market failure or market imperfection. Since late 2007 tourism, like most industries, has been suffering from the effects of the global recession and throughout the world private sector interests are lobbying for increased public sector support. However, the main lesson for other countries from this study is that Governments must acknowledge that creating additional tourism agencies may not be what their tourism industry requires because in Northern Ireland’s case the complex mosaic of public sector agencies that has been created has hindered tourism development. From a tourism management perspective the role of the public sector is to improve the performance of the industry. However, creating a myriad of public sector agencies can suffocate rather than stimulate development. Ironically, the current economic recession is, at the very least, likely to force those countries which are over-administered to reassess their position. With mounting budget deficits, efficiency savings is now the priority of most Western Governments. Therefore, those involved in tourism planning and development must consider how they can do more with less. This should not, however, be seen as a threat but an opportunity, a time for those who oversee public sector tourism agencies to radically rethink current structures, procedures and processes. For small countries, the lesson from Northern Ireland, Scotland, Wales and the Republic of Ireland is that their geographical make-up would suggest that a more centralised approach to tourism management is more appropriate as it would help remove the endless tiers of consultation and disagreement over development goals and funding which often occurs between national, regional and local agencies. However, it is not only small countries that can benefit from a more streamlined public sector. For instance, if a country decides to merge two public sector agencies with overlapping tourism remits the money saved in operating costs can be used to stimulate entrepreneurial activity, something which is vital given the current economic environment. In addition, as governments are forced to tighten their financial belts public sector agencies will be under pressure to work more closely with the private sector to manage the marketing, planning, control and development of tourism. Again, this should be seen as a positive rather than a negative because, if managed properly public–private partnerships can be a more effective and efficient means of developing tourism. To conclude the public sector has and will continue to have an important role to play in tourism management. Yet, the old adage ‘that too many cooks spoil the broth’ is relevant because too many public sector agencies can stifle development. More is not always better and additional public sector agencies do not necessarily equate to increased support for the tourism industry. Thus, for many countries the way forward in the current economic climate is collaboration (with the private sector) not creation (of additional public sector agencies).