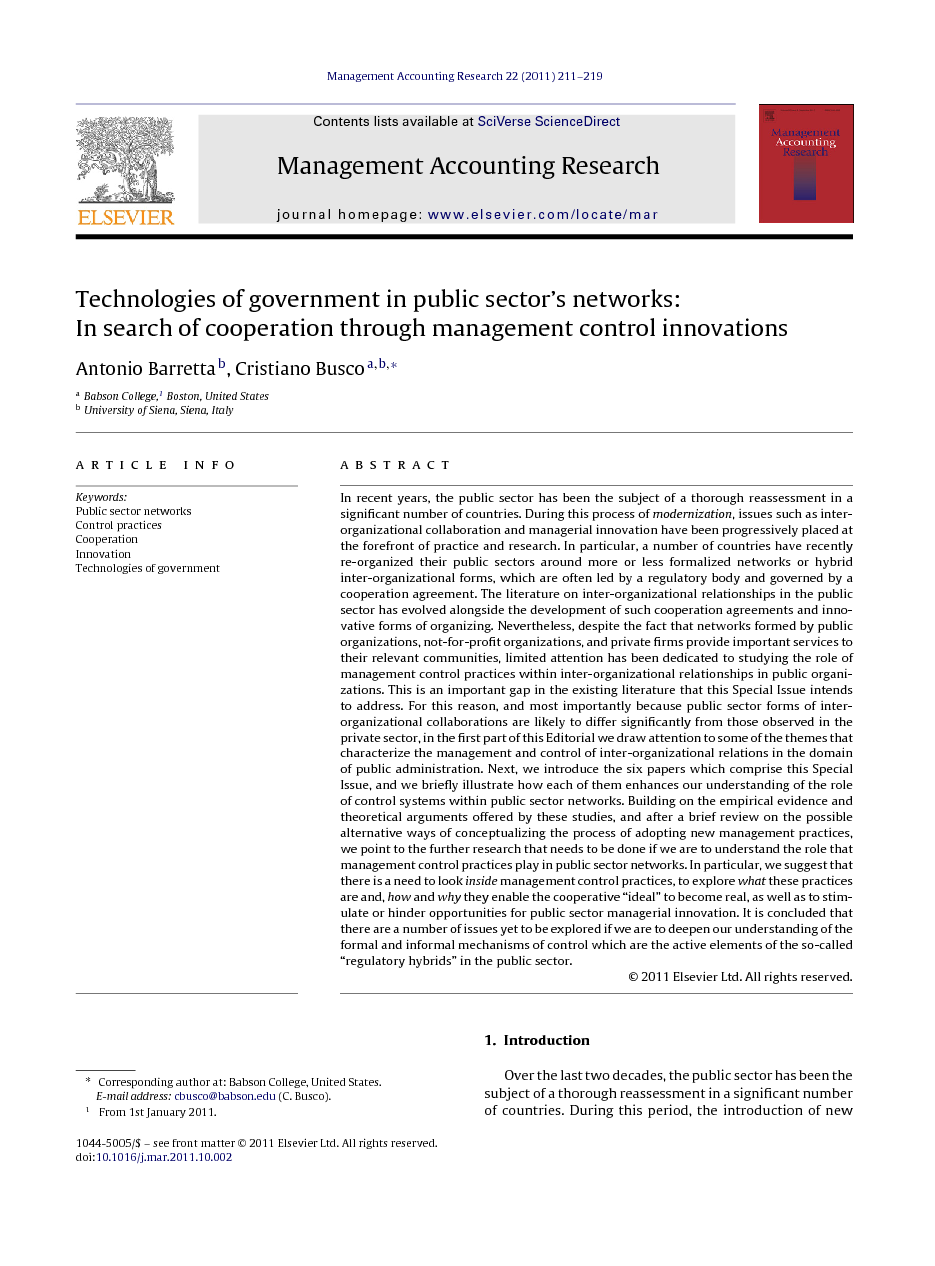 In recent years, the public sector has been the subject of a thorough reassessment in a significant number of countries. During this process of modernization, issues such as inter-organizational collaboration and managerial innovation have been progressively placed at the forefront of practice and research. In particular, a number of countries have recently re-organized their public sectors around more or less formalized networks or hybrid inter-organizational forms, which are often led by a regulatory body and governed by a cooperation agreement. The literature on inter-organizational relationships in the public sector has evolved alongside the development of such cooperation agreements and innovative forms of organizing. Nevertheless, despite the fact that networks formed by public organizations, not-for-profit organizations, and private firms provide important services to their relevant communities, limited attention has been dedicated to studying the role of management control practices within inter-organizational relationships in public organizations. This is an important gap in the existing literature that this Special Issue intends to address. For this reason, and most importantly because public sector forms of inter-organizational collaborations are likely to differ significantly from those observed in the private sector, in the first part of this Editorial we draw attention to some of the themes that characterize the management and control of inter-organizational relations in the domain of public administration. Next, we introduce the six papers which comprise this Special Issue, and we briefly illustrate how each of them enhances our understanding of the role of control systems within public sector networks. Building on the empirical evidence and theoretical arguments offered by these studies, and after a brief review on the possible alternative ways of conceptualizing the process of adopting new management practices, we point to the further research that needs to be done if we are to understand the role that management control practices play in public sector networks. In particular, we suggest that there is a need to look inside management control practices, to explore what these practices are and, how and why they enable the cooperative “ideal” to become real, as well as to stimulate or hinder opportunities for public sector managerial innovation. It is concluded that there are a number of issues yet to be explored if we are to deepen our understanding of the formal and informal mechanisms of control which are the active elements of the so-called “regulatory hybrids” in the public sector.

Over the last two decades, the public sector has been the subject of a thorough reassessment in a significant number of countries. During this period, the introduction of new programmes, policies and reforms, as well as the resulting implementation of innovative practices, processes and techniques have often been “branded” by the term New Public Management ( Hood, 1995 and Hood, 1998). The agenda of New Public Management embraces reforms aimed at improving the quality of public services, reducing public expenditure, increasing the efficiency of governmental operations, and making policy implementation more effective, to name a few ( Hughes, 2003 and Pollitt and Bouckaert, 2000). The rhetoric of New Public Management emphasizes the need to modernize the public sector by abandoning traditional public management styles and professional bureaucracies and, instead, promoting concepts such as accountability, performance, networking, efficiency, and effectiveness as the core elements in managing public organizations. Within this ongoing, but fragmentary, process of modernizing of the public sector, issues such as inter-organizational collaboration and managerial innovation have been progressively placed at the forefront of practice and research (see, among others, Mahony et al., 2010 and Kurunmäki and Miller, 2006). Between the mid 1980s and the late 1990s, in many countries the idea prevailed that competition between public organizations (as well as between public and private organizations) could guarantee the more efficient use of resources on the one hand and, on the other, the opportunity for the citizen-user to choose between several providers according to the quality of the service offered. For example, in several countries the reform of public healthcare systems was characterized by the need to enhance competition among service providers (Lapsley, 1993). However, it was soon realized that new models of governance did not necessarily lead to improved effectiveness and efficiency. Significantly, greater competition among service providers caused various problems, including irrational economic behaviors, and prevented any form of inter-organizational cooperation (Ellwood, 1996 and Pettersen, 1999). For these reasons, a number of countries have recently re-organized their public sector around more or less formalized networks, or hybrid inter-organizational forms, which are often led by a regulatory body and governed by a cooperation agreement (see, among the others, Barretta, 2008 and Kurunmäki and Miller, 2006). The literature on inter-organizational relationships in the public sector has evolved alongside the development of these cooperation agreements and innovative forms of organizing (Samuel et al., 2009, Broadbent and Guthrie, 2008 and Moll and Humphrey, 2007). Numerous issues have been debated, including the factors that induce organizations to cooperate, the reasons for the success (or failure) of partnerships, the structure and strategies of cooperation agreements, and the role of trust in networks. Despite the fact that networks formed by public organizations, not-for-profit organizations, and private firms provide important services for their relevant communities, limited attention has been dedicated to studying the role of management control practices in inter-organizational relationships involving public organizations (see Brignall and Modell, 2000, Clarke and Lapsley, 2004, Kurunmäki, 2004, Lapsley and Wright, 2004, Miller et al., 2008 and Modell et al., 2007). We believe this is an important gap in the existing literature, which this Special Issue of Management Accounting Research intends to start addressing.

The process of modernization that has recently characterized several public sector reforms has placed inter-organizational collaboration and managerial innovation at the forefront of practice and research. In the previous sections we have pointed out that this process involves the continuous interaction between programmes and technologies of government. Interpreted as technologies of government, management control practices can come to be relied upon by the members in networks, and act as coordinating mechanisms which mediate among multiple inter-organizational interests. Building on the practical and theoretical insights offered by this Special Issue, future studies could focus on the nature of management control practices to explore how and why public sector networks adopt particular control mechanisms. Since innovation requires an ability to see things differently, future studies could benefit from a deeper look “inside” management control practices; i.e., by exploring What these practices are and, How and Why they enable the cooperative “ideal” to become realized, as well as whether they stimulate (or hinder) opportunities for public sector innovation. We believe it would be interesting to address the following research questions, among others: what institutional, political and contextual factors affect the deployment of management control systems in public sector networks? What happens when a lack of regulations or “holes” in government reforms provide opportunities for the members of the network to innovate with mechanisms of governance, management and control? What are the interplays between control and social mechanisms, such as trust, when a lack of regulation creates a certain amount of ambiguity? Additionally, since performance measurement is critical to accountability, but is not easy to implement in practice, we believe that further research should address issues concerning both performance and performance measurement in public sector networks; i.e. for instance, what do we mean by public network performance? What is the role of management control practices in defining and measuring the concept of network performance? Finally, even if a significant number of public sector networks are created by mandate, what are the opportunities for public managers, private contractors, and the users of public services to embrace innovation and to promote new management and control mechanisms which could improve cooperation? We hope that future research will shed light on, at least, some of these questions.