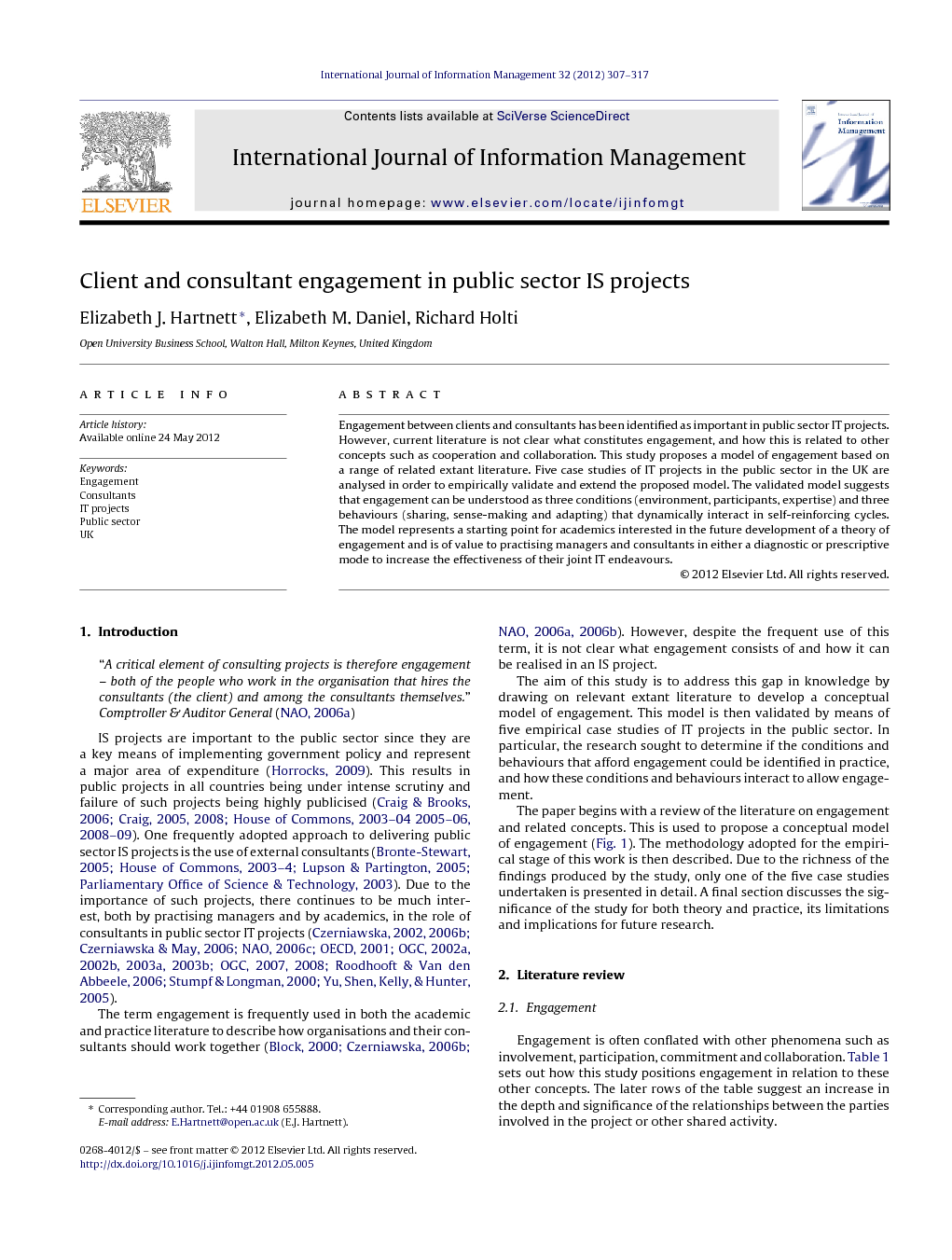 Engagement between clients and consultants has been identified as important in public sector IT projects. However, current literature is not clear what constitutes engagement, and how this is related to other concepts such as cooperation and collaboration. This study proposes a model of engagement based on a range of related extant literature. Five case studies of IT projects in the public sector in the UK are analysed in order to empirically validate and extend the proposed model. The validated model suggests that engagement can be understood as three conditions (environment, participants, expertise) and three behaviours (sharing, sense-making and adapting) that dynamically interact in self-reinforcing cycles. The model represents a starting point for academics interested in the future development of a theory of engagement and is of value to practising managers and consultants in either a diagnostic or prescriptive mode to increase the effectiveness of their joint IT endeavours.

“A critical element of consulting projects is therefore engagement – both of the people who work in the organisation that hires the consultants (the client) and among the consultants themselves.” Comptroller & Auditor General (NAO, 2006a) IS projects are important to the public sector since they are a key means of implementing government policy and represent a major area of expenditure (Horrocks, 2009). This results in public projects in all countries being under intense scrutiny and failure of such projects being highly publicised (Craig and Brooks, 2006, Craig, 2005, Craig, 2008, House of Commons, 2003, House of Commons, 2005 and House of Commons, 2008). One frequently adopted approach to delivering public sector IS projects is the use of external consultants (Bronte-Stewart, 2005, House of Commons, 2003, Lupson and Partington, 2005 and Parliamentary Office of Science and Technology, 2003). Due to the importance of such projects, there continues to be much interest, both by practising managers and by academics, in the role of consultants in public sector IT projects (Czerniawska, 2002, Czerniawska, 2006b, Czerniawska and May, 2006, NAO, 2006c, OECD, 2001, OGC, 2002a, OGC, 2002b, OGC, 2003a, OGC, 2003b, OGC, 2007, OGC, 2008, Roodhooft and Van den Abbeele, 2006, Stumpf and Longman, 2000 and Yu et al., 2005). The term engagement is frequently used in both the academic and practice literature to describe how organisations and their consultants should work together (Block, 2000, Czerniawska, 2006b, NAO, 2006a and NAO, 2006b). However, despite the frequent use of this term, it is not clear what engagement consists of and how it can be realised in an IS project. The aim of this study is to address this gap in knowledge by drawing on relevant extant literature to develop a conceptual model of engagement. This model is then validated by means of five empirical case studies of IT projects in the public sector. In particular, the research sought to determine if the conditions and behaviours that afford engagement could be identified in practice, and how these conditions and behaviours interact to allow engagement. The paper begins with a review of the literature on engagement and related concepts. This is used to propose a conceptual model of engagement (Fig. 1). The methodology adopted for the empirical stage of this work is then described. Due to the richness of the findings produced by the study, only one of the five case studies undertaken is presented in detail. A final section discusses the significance of the study for both theory and practice, its limitations and implications for future research.

The findings of the study provide empirical support for the elements included in the proposed model (Fig. 1). Three behaviours have been identified: sharing, sense making and adapting. These behaviours appear to be inter-related and iterative, that is sharing dialogue and boundary objects allows sense making of the project, the context and the objectives and approaches of the others involved in the project. Developing this sense-making appears to allow those involved to adapt their behaviour, and where necessary, the conditions relating to the project. The cases suggested that informal approaches are important for sharing, which is consistent with observations that socialization and shared experience are important for the transfer of tacit knowledge (Nonaka, 1994). Informal approaches are often eschewed in the public sector due to the wish to have the trail of evidence of accountability that is provided by written reports and emails. It would appear that this desire to generate a record of accountability might be hampering the ability to develop the behaviours identified in this study as conducive to engagement. The role of the conditions identified in the proposed model appears to be to allow participants’ sharing, sense making and adapting behaviours to emerge. The environment encourages sharing; participants participate in sharing, and they contribute expertise that helps sense making. If conditions exist, then the behaviours can exist; for example, in case D, the blog allowed client staff to share their views of the supplier performance with each other and hence make sense of the level of performance that was being provided. Materiality of physical or virtual context in which people work (Orlikowski, 2006) is important in stimulating and supporting the identified behaviours, since it gives participants something to work on, share, and talk about together. This finding supports recent work on how consultants use materials (Skovgaard-Smith, 2009) and on sense making that uses materials (Beers et al., 2006 and Werkman, 2010). Analysis of the interconnections between the conditions and behaviours across the five case studies shows a number of different patterns. However, there was a consistent notion of the cyclic and self-reinforcing nature of the interaction between the behaviours and conditions studied. That is, appropriate conditions allowed the behaviours identified to develop. Similarly, where appropriate behaviours were demonstrated this, particularly through the behaviour of adapting, led to a change in the environment that was more conducive to the behaviours. We are aware that the five projects studied were all judged as successful by those involved. It is therefore not surprising that the cyclic interaction between conditions and behaviours was a virtuous cycle, with the behaviours leading to conditions that supported further development of sharing, sense making and adapting. The first phase of case D, which was the only part of a case that was not judged as successful, suggests that a similar vicious cycle can set in. In this case, a lack of sharing, particularly of project plans, led to concerns about the suppliers’ expertise. However, this case study suggests that a vicious cycle can be reversed.