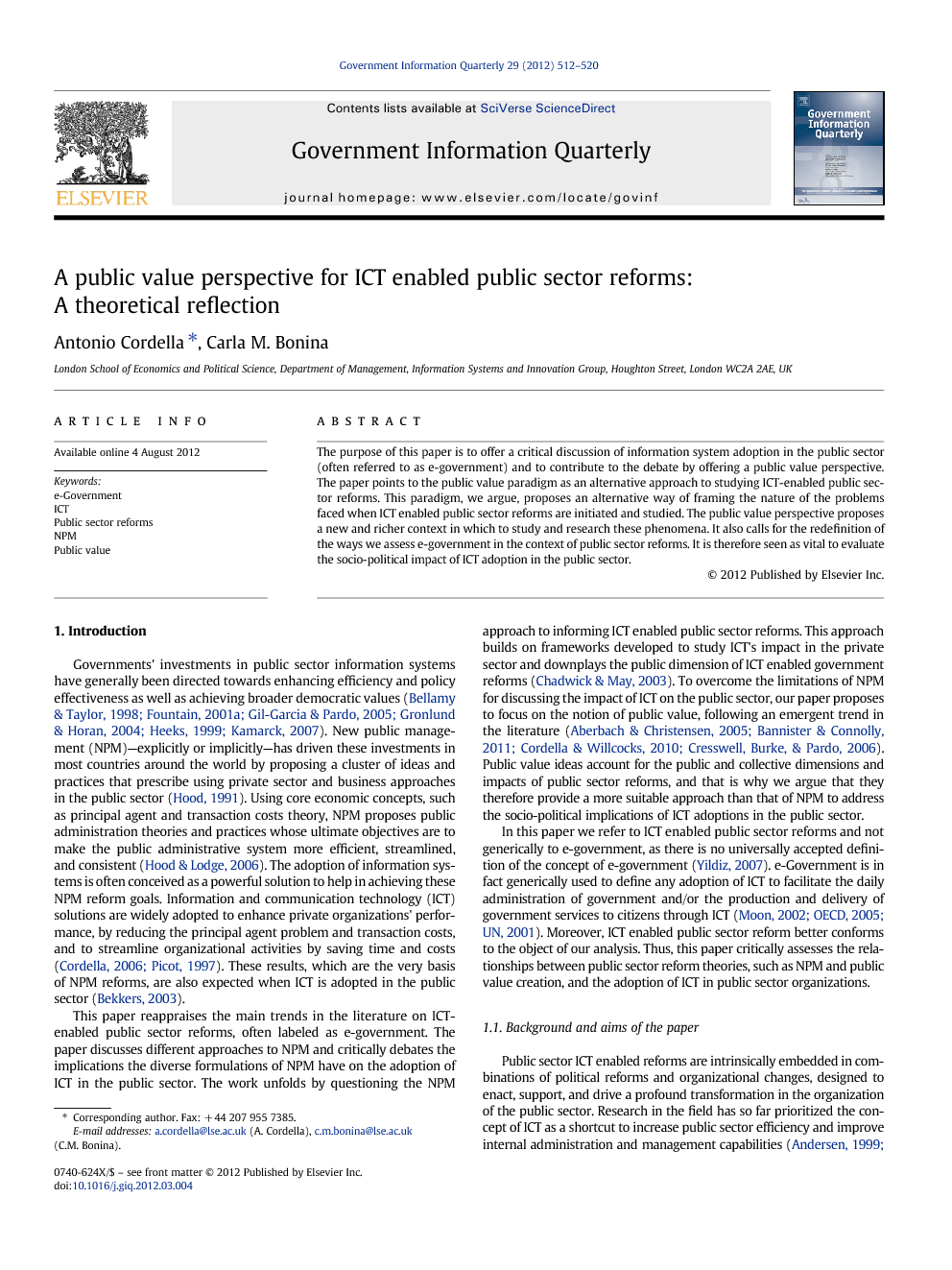 Governments' investments in public sector information systems have generally been directed towards enhancing efficiency and policy effectiveness as well as achieving broader democratic values (Bellamy and Taylor, 1998, Fountain, 2001a, Gil-Garcia and Pardo, 2005, Gronlund and Horan, 2004, Heeks, 1999 and Kamarck, 2007). New public management (NPM)—explicitly or implicitly—has driven these investments in most countries around the world by proposing a cluster of ideas and practices that prescribe using private sector and business approaches in the public sector (Hood, 1991). Using core economic concepts, such as principal agent and transaction costs theory, NPM proposes public administration theories and practices whose ultimate objectives are to make the public administrative system more efficient, streamlined, and consistent (Hood & Lodge, 2006). The adoption of information systems is often conceived as a powerful solution to help in achieving these NPM reform goals. Information and communication technology (ICT) solutions are widely adopted to enhance private organizations' performance, by reducing the principal agent problem and transaction costs, and to streamline organizational activities by saving time and costs (Cordella, 2006 and Picot, 1997). These results, which are the very basis of NPM reforms, are also expected when ICT is adopted in the public sector (Bekkers, 2003). This paper reappraises the main trends in the literature on ICT-enabled public sector reforms, often labeled as e-government. The paper discusses different approaches to NPM and critically debates the implications the diverse formulations of NPM have on the adoption of ICT in the public sector. The work unfolds by questioning the NPM approach to informing ICT enabled public sector reforms. This approach builds on frameworks developed to study ICT's impact in the private sector and downplays the public dimension of ICT enabled government reforms (Chadwick & May, 2003). To overcome the limitations of NPM for discussing the impact of ICT on the public sector, our paper proposes to focus on the notion of public value, following an emergent trend in the literature (Aberbach and Christensen, 2005, Bannister and Connolly, 2011, Cordella and Willcocks, 2010 and Cresswell et al., 2006). Public value ideas account for the public and collective dimensions and impacts of public sector reforms, and that is why we argue that they therefore provide a more suitable approach than that of NPM to address the socio-political implications of ICT adoptions in the public sector. In this paper we refer to ICT enabled public sector reforms and not generically to e-government, as there is no universally accepted definition of the concept of e-government (Yildiz, 2007). e-Government is in fact generically used to define any adoption of ICT to facilitate the daily administration of government and/or the production and delivery of government services to citizens through ICT (Moon, 2002, OECD, 2005 and UN, 2001). Moreover, ICT enabled public sector reform better conforms to the object of our analysis. Thus, this paper critically assesses the relationships between public sector reform theories, such as NPM and public value creation, and the adoption of ICT in public sector organizations.

Through the paper we have shown that ICT enabled public sector reforms are complex phenomena that cannot be studied solely by drawing on private sector managerial models that essentially conceive of technology as an enabler. Even if most of the existing research has mainly been built on theoretical frameworks which downplay the socio-political context in which public sector ICT is deployed, there are good examples in the present and past literature, of contributions which have not followed this path. Danziger, Dutton, Kling, and Kraemer (1982), for example, looked at the impact of information technology on the distribution of power among organizational groups, such as politicians, administrators, financial experts and urban planners. They conclude that information systems have impacts which go far beyond those which have been discussed in the NPM literature since the '90s. Their contribution, in fact, concludes that ICT implementation in the public sector reinforces the prevailing structures of control and the prevailing biases within the government, highlighting the complexity of the impact of information systems on public sector organizations and outcomes. This complexity has, however, been at the margins of researchers' interests; they have instead favored an approach based on the consideration of ICT as a tool for public sector reforms to drive a predetermined process of change. This is well discussed in recent literature reviews in the field (Andersen et al., 2010, Danziger and Andersen, 2002, Heeks and Bailur, 2007 and Yildiz, 2007). In other words, the vision which “considers IT merely one more resource, albeit a powerful and protean one, in the arsenal of politics-as-usual” (Danziger & Andersen, 2002) is still dominant in e-government research; and that the main focus of research in the field is still concerned with the managerial and economic aspects of adopting and deploying ICT in the public sector. This paper offers a detailed review of this literature and identifies that NPM is the underpinning theoretical foundation that (implicitly) has informed the research domain of ICT enabled public sector reform. While reviewing this literature, the paper highlights the limits of this approach; it does not account for the social and political impacts of ICT enabled public sector reform. Based on a lively and growing debate within public administration scholars, we argue that the notion of public value can be a more fruitful channel to address the complex socio-political impacts of ICT adoption in the public sector. The ideas behind the public value framework propose considering public sector reforms as composite outcomes framed in multiple objectives, such as narrow economic objectives, broader outcomes, and the creation of and maintenance of socially shared expectations of fairness, trust, and legitimacy, whose effects cannot be detached from the social and political context within which they are defined. ICT enabled public sector reforms are themselves infused with shifting political systems of logic, which can be conceived of as carriers of transient interests, molded by contingent visions and values which reflect the goals or aspirations of the society as a whole. Little wonder that the choice and design of ICT enabled reforms is often fraught with tension deriving from the mismatch between the transient values reflecting different political interests. Yet, the use of economic drivers to study, design, and assess the impact of ICT enabled public sector reforms, as infused by the NPM discourse, falls short to address the complexity that is always associated with the deployment of these reforms. Our paper points to the public value paradigm as an alternative approach for studying ICT enabled public sector reform; it proposes an alternative way of looking at the nature of the problems faced when ICT enabled public sector reforms are initiated and studied. The public value paradigm suggests that the qualities of public sector organizations are assessed on the basis of their ability to deliver the expected value to the citizens and not only by their value-for-money ratio. The latter can be an expected value, but not necessarily the only and prevailing one. By putting the creation of public value at the center of government objectives, it becomes clear that the collective expectations, and the policies needed to accomplish these expectations, are complex in nature and not predefined. We have also outlined a number of valuable efforts to assess ICT enabled public sector reforms (and also e-government more generally) that can be useful to map empirical research. Yet, it remains a challenge to accumulate more empirical research on the area. We conclude, therefore, that an attentive consideration of the public value created by the government's action would seem to be a useful counterweight to the rhetoric of progress, modernization, transformative ICTs and new public management that has shaped public management practices over the last 20 years.