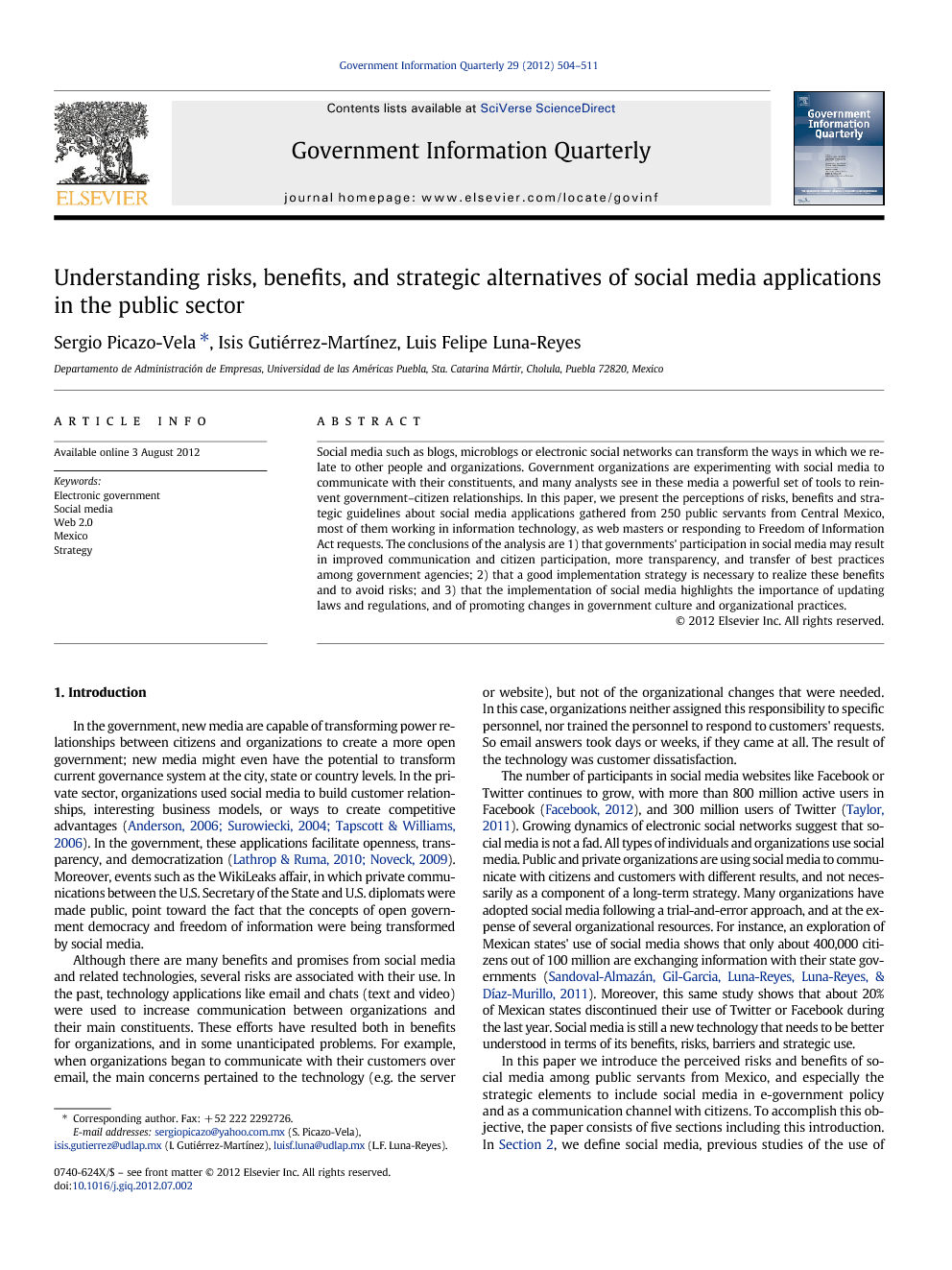 Social media such as blogs, microblogs or electronic social networks can transform the ways in which we relate to other people and organizations. Government organizations are experimenting with social media to communicate with their constituents, and many analysts see in these media a powerful set of tools to reinvent government–citizen relationships. In this paper, we present the perceptions of risks, benefits and strategic guidelines about social media applications gathered from 250 public servants from Central Mexico, most of them working in information technology, as web masters or responding to Freedom of Information Act requests. The conclusions of the analysis are 1) that governments' participation in social media may result in improved communication and citizen participation, more transparency, and transfer of best practices among government agencies; 2) that a good implementation strategy is necessary to realize these benefits and to avoid risks; and 3) that the implementation of social media highlights the importance of updating laws and regulations, and of promoting changes in government culture and organizational practices.

In the government, new media are capable of transforming power relationships between citizens and organizations to create a more open government; new media might even have the potential to transform current governance system at the city, state or country levels. In the private sector, organizations used social media to build customer relationships, interesting business models, or ways to create competitive advantages (Anderson, 2006, Surowiecki, 2004 and Tapscott and Williams, 2006). In the government, these applications facilitate openness, transparency, and democratization (Lathrop and Ruma, 2010 and Noveck, 2009). Moreover, events such as the WikiLeaks affair, in which private communications between the U.S. Secretary of the State and U.S. diplomats were made public, point toward the fact that the concepts of open government democracy and freedom of information were being transformed by social media. Although there are many benefits and promises from social media and related technologies, several risks are associated with their use. In the past, technology applications like email and chats (text and video) were used to increase communication between organizations and their main constituents. These efforts have resulted both in benefits for organizations, and in some unanticipated problems. For example, when organizations began to communicate with their customers over email, the main concerns pertained to the technology (e.g. the server or website), but not of the organizational changes that were needed. In this case, organizations neither assigned this responsibility to specific personnel, nor trained the personnel to respond to customers' requests. So email answers took days or weeks, if they came at all. The result of the technology was customer dissatisfaction. The number of participants in social media websites like Facebook or Twitter continues to grow, with more than 800 million active users in Facebook (Facebook, 2012), and 300 million users of Twitter (Taylor, 2011). Growing dynamics of electronic social networks suggest that social media is not a fad. All types of individuals and organizations use social media. Public and private organizations are using social media to communicate with citizens and customers with different results, and not necessarily as a component of a long-term strategy. Many organizations have adopted social media following a trial-and-error approach, and at the expense of several organizational resources. For instance, an exploration of Mexican states' use of social media shows that only about 400,000 citizens out of 100 million are exchanging information with their state governments (Sandoval-Almazán, Gil-Garcia, Luna-Reyes, Luna-Reyes, & Díaz-Murillo, 2011). Moreover, this same study shows that about 20% of Mexican states discontinued their use of Twitter or Facebook during the last year. Social media is still a new technology that needs to be better understood in terms of its benefits, risks, barriers and strategic use. In this paper we introduce the perceived risks and benefits of social media among public servants from Mexico, and especially the strategic elements to include social media in e-government policy and as a communication channel with citizens. To accomplish this objective, the paper consists of five sections including this introduction. In Section 2, we define social media, previous studies of the use of social media at organizations, their use in the public sector, and a conceptual framework that is useful to organize the perceptions of participants. In Section 3, the research methodology is elaborated. In Section 4, the results of the study are explained. Finally, in Section 5 we present the findings and conclusions, and we suggest some ideas for further research.