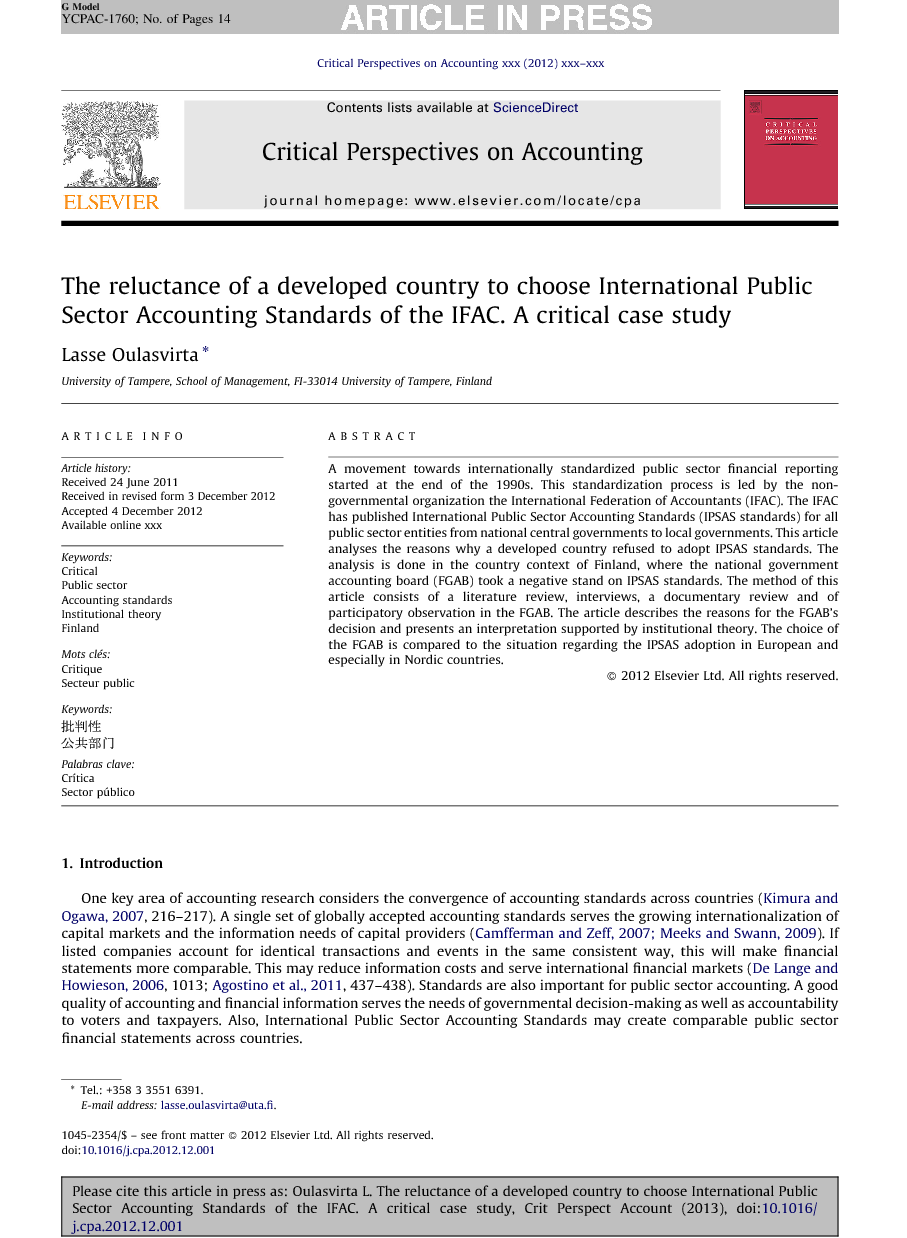 A movement towards internationally standardized public sector financial reporting started at the end of the 1990s. This standardization process is led by the non-governmental organization the International Federation of Accountants (IFAC). The IFAC has published International Public Sector Accounting Standards (IPSAS standards) for all public sector entities from national central governments to local governments. This article analyses the reasons why a developed country refused to adopt IPSAS standards. The analysis is done in the country context of Finland, where the national government accounting board (FGAB) took a negative stand on IPSAS standards. The method of this article consists of a literature review, interviews, a documentary review and of participatory observation in the FGAB. The article describes the reasons for the FGAB's decision and presents an interpretation supported by institutional theory. The choice of the FGAB is compared to the situation regarding the IPSAS adoption in European and especially in Nordic countries.

The tradition of Finnish governmental accounting developed on its own premises. Its main features were prudence and emphasize on historical costs. The Finnish government adopted commercial double-entry bookkeeping in 1998, and the conceptual framework choice was accrual accounting based on a revenue/expense model and historical costs instead of the asset/liability model and fair value promoted by the IFAC and IPSASB in its CF. Why was the FGAB and more widely the governmental accounting bureaucracy reluctant to go for the IPSAS in the 2000s? The conclusion of this study is that the most important factor was the long and well developed public sector accounting tradition in Finland that resisted pressures to change the domestic governmental accounting institution. The domestic and international mimetic and normative pressures were not strong enough to initiate a deinstitutionalization process. Other Nordic countries did not adopt IPSAS standards and there were no coercive pressures such as compelling rules to adopt the IPSAS during the research period. If the governmental accounting culture is deeply rooted as in Finland it is difficult to change it (Tolbert and Zucker, 1996, 184). In such a situation it is likely that deinstitutionalization requires a major shift in the environment of the prevailing institution. No major shifts in the environment of the Finnish government accounting institution took place during the period 2000–2011. In the long run, it is still possible that government accounting harmonizing pressures will gain strength and again challenge the present accrual accounting model of the Finnish government. For instance, the EU may issue compulsory regulations to follow the IPSAS, which will force Finland to abandon her present national governmental accounting model. If such EU pressures or other coercive isomorphic pressures, for instance from the credit markets, do not emerge, it will then be more up to how potent the normative and mimetic institutional pressures are to adopt IPSAS standards in the future. If the key accounting officials in the government and the elites of accounting professionals begin to support IPSAS standards and if other Nordic countries begin to use the IPSAS in government accounting, such forces may have a strong deinstitutionalizing impact in Finland. One strength of the institutional analysis is that it sees accounting cultures and regimes as open systems with permeable interfaces and can thus be well applied to the interplay of international standards and national standards of accounting. International standards have an influence on national public sector accounting regimes and practices even if these standards are not fully and formally accepted in a country. National and local accounting traditions and regimes are developing at the intersection of different forces connected to institutional isomorphism. Continuing diversity of standards may be a better choice than a single set of global standards (Meeks and Swann, 2009, 202–206). However, it is now too late to challenge the IPSAS with an alternative global set of standards based on a different CF, for instance, based on the historical cost valuation and the revenue-expense approach. It is difficult to see which organization would have the interest and power to do it successfully. Anyway, the IFAC and its IPSASB are offering a complete set of standards and is approaching now the final phase of developing the CF which guides not only the development of IPSASs but also other documents dealing with financial reporting by public sector entities. However, the study gives some credibility to such assumptions that the IPSAS may not become popular in developed countries which have already been using different accrual accounting frameworks in the public sector than the IPSAS. It is probable that the IPSAS will be voluntarily adopted or mostly give inspiration to accounting institutions in countries representing the Anglo-American accounting culture. On the other hand, many developing countries will probably be using the IPSAS more and more because of external coercive pressures even if complicated accrual standards may be infeasible in less developed countries. This will lead in practice to gradual and partial adaptation to IPSAS standards instead of a sudden full adoption of the standards.