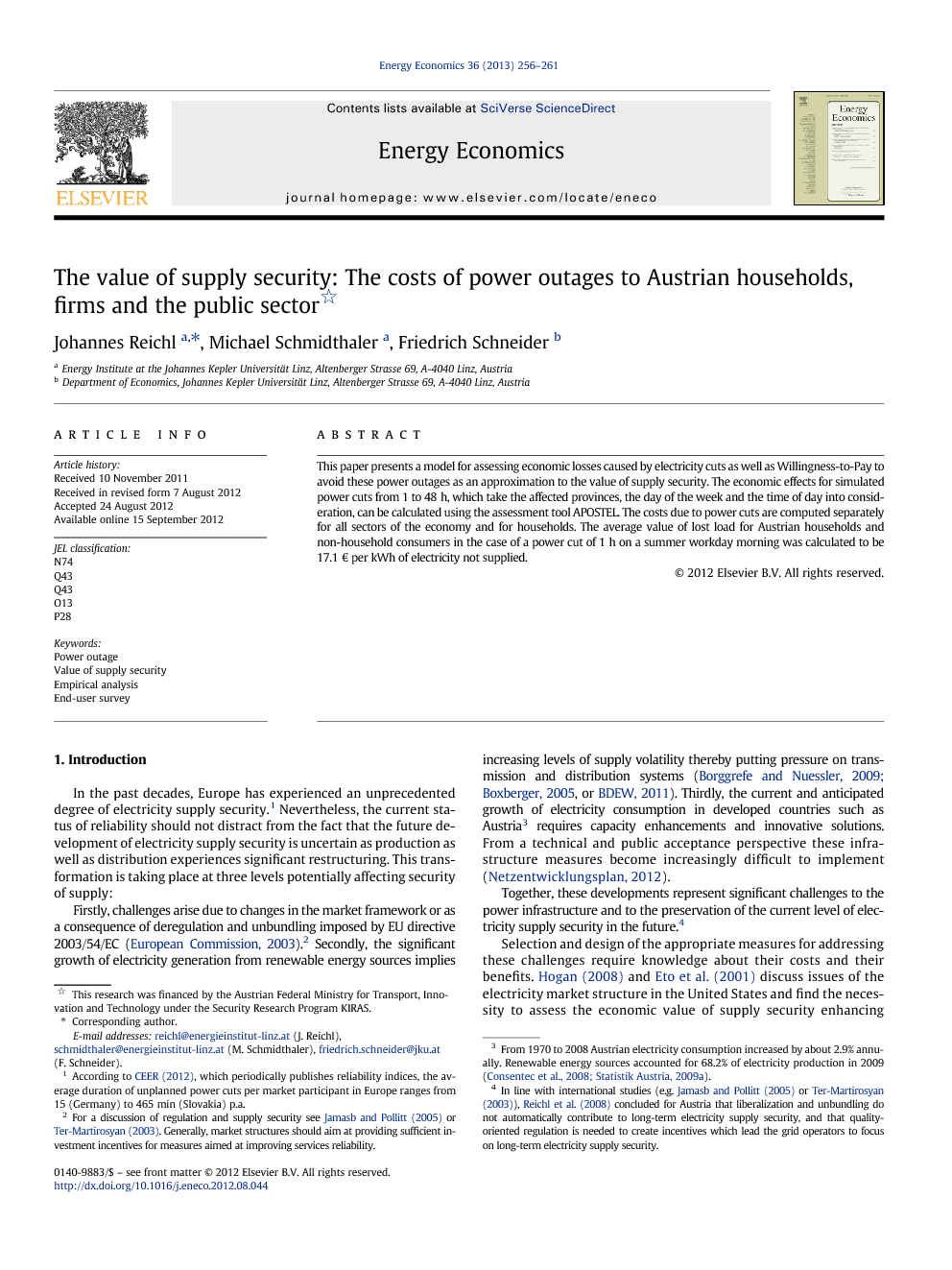 This paper presents a model for assessing economic losses caused by electricity cuts as well as Willingness-to-Pay to avoid these power outages as an approximation to the value of supply security. The economic effects for simulated power cuts from 1 to 48 h, which take the affected provinces, the day of the week and the time of day into consideration, can be calculated using the assessment tool APOSTEL. The costs due to power cuts are computed separately for all sectors of the economy and for households. The average value of lost load for Austrian households and non-household consumers in the case of a power cut of 1 h on a summer workday morning was calculated to be 17.1 € per kWh of electricity not supplied.

In the past decades, Europe has experienced an unprecedented degree of electricity supply security.1 Nevertheless, the current status of reliability should not distract from the fact that the future development of electricity supply security is uncertain as production as well as distribution experiences significant restructuring. This transformation is taking place at three levels potentially affecting security of supply: Firstly, challenges arise due to changes in the market framework or as a consequence of deregulation and unbundling imposed by EU directive 2003/54/EC (European Commission, 2003).2 Secondly, the significant growth of electricity generation from renewable energy sources implies increasing levels of supply volatility thereby putting pressure on transmission and distribution systems (Borggrefe and Nuessler, 2009 and Boxberger, 2005, or BDEW, 2011). Thirdly, the current and anticipated growth of electricity consumption in developed countries such as Austria3 requires capacity enhancements and innovative solutions. From a technical and public acceptance perspective these infrastructure measures become increasingly difficult to implement (Netzentwicklungsplan, 2012). Together, these developments represent significant challenges to the power infrastructure and to the preservation of the current level of electricity supply security in the future.4 Selection and design of the appropriate measures for addressing these challenges require knowledge about their costs and their benefits. Hogan (2008) and Eto et al. (2001) discuss issues of the electricity market structure in the United States and find the necessity to assess the economic value of supply security enhancing measures as complement to the evaluation of their technological benefits. This is an essential prerequisite for regulatory policy and for the justification of investment decisions. While efficient decision making regarding security investments is hampered by the lack of precise knowledge of the benefits of potential enhancing measures, large scale failures of the power system are supposed to have increasingly serious consequences for the society. In the presence of near-perfect levels of supply reliability and increasing electricity dependence, societies are getting more vulnerable to power outages as preparation for prolonged outages becomes more difficult and less of a concern. This is known as the double paradox, researched in detail by Luiijf and Klaver (2000) and De Hoo et al. (1994) for the Netherlands. Despite their increasing dependence on uninterrupted electricity supply, consumers send hardly any signals about their valuation of energy supply security to suppliers, who thus misinterpret the benefits of reliability improvements and postpone infrastructure investments (Böske et al., 2007). In the special case of grid-bound supply systems, such as electricity,5 customers have for physical reasons no option of choosing an operator with a more adequate level of supply security. In addition to these specific economic aspects of electricity supply security, the short- and medium-term resilience of infrastructures in spite of security-preserving investments not being made creates incentives to further postpone investments. Precise knowledge of the importance of uninterrupted electricity supply to society is thus paramount. This research aims at providing an economic assessment of the value of electricity supply security which can be used – among others – for energy political decisions, benefit cost analyses, or the design of regulatory frameworks.6 Since electricity supply security constitutes a non-market good, which can only be purchased in combination with the physical product (electricity), its value cannot be elicited by market transactions (Kariuki and Allan, 1996a). That is why usually the effects of a failure of electricity supply are utilized for the value elicitation of service reliability (Baarsma and Hop, 2009 and De Nooij et al., 2007, or Woo and Pupp, 1992, for instance). In this study the costs of power cuts to non-household consumers, which include businesses, public sector entities and non-government organizations (NGOs), along with the Willingness-to-Pay (WTP) of household consumers to avoid power outages are analyzed as a proxy of the value of security. With the economic assessment tool presented in this paper it is possible for the first time to collect data on the power outage costs for different consumer groups and to simulate the effects of power outages from one to 48 h in Austria. This paper proceeds as follows: Section 2 describes the different outage cost categories and introduces the methodology utilized to assess the losses due to power cuts. Section 3 contains the results from the elicitation of non-household consumers' outage costs and households' WTP to avoid power interruptions. The assessment tool and its application for a power outage case study (simulated 12‐hour power cut in Austria) are presented. Section 4 summarizes and adds a conclusion concerning the need for further research.