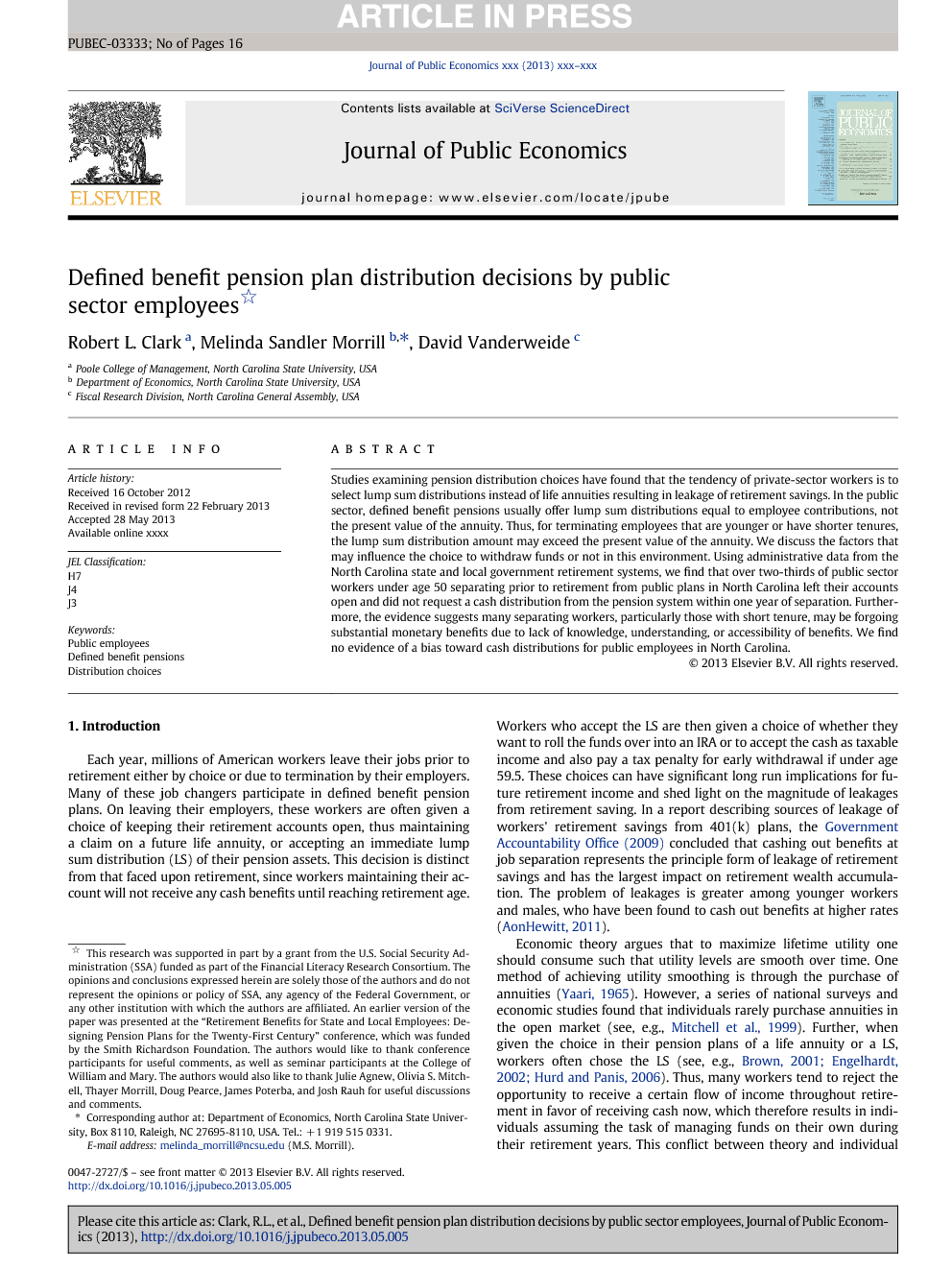 Studies examining pension distribution choices have found that the tendency of private-sector workers is to select lump sum distributions instead of life annuities resulting in leakage of retirement savings. In the public sector, defined benefit pensions usually offer lump sum distributions equal to employee contributions, not the present value of the annuity. Thus, for terminating employees that are younger or have shorter tenures, the lump sum distribution amount may exceed the present value of the annuity. We discuss the factors that may influence the choice to withdraw funds or not in this environment. Using administrative data from the North Carolina state and local government retirement systems, we find that over two-thirds of public sector workers under age 50 separating prior to retirement from public plans in North Carolina left their accounts open and did not request a cash distribution from the pension system within one year of separation. Furthermore, the evidence suggests many separating workers, particularly those with short tenure, may be forgoing substantial monetary benefits due to lack of knowledge, understanding, or accessibility of benefits. We find no evidence of a bias toward cash distributions for public employees in North Carolina.

Our analysis shows that public employees face very different choices than do private sectors employees. Whereas private sector plans are constrained by law to offer lump sum distributions (LS's) that are greater than or equal to the present value of the future annuity, public sector pension plans base the LS on employee contributions and credited interest. Hence, the LS value is not directly linked to the value of the life annuity. Leakages of retirement savings when participants in defined benefit plans change jobs is a two step decision process. First, if the individual decides to leave his/her funds in the pension plan, no leakage occurs at this time; however, individuals can request a LS in the future. Second, having requested a LS, the individual has the option to take the distribution as cash or to directly rollover funds into an IRA. Using administrative records from North Carolina retirement plans, we provide a detailed picture of the distribution decisions of workers ages 18 to 49 that separated prior to retirement from public pension plans in North Carolina between 2007 and 2008. We show that, for younger workers and those with fewer years of service, the LS typically is larger in value than our approximation of the present value of the annuity (PDVA), yet only one-third elected the LS. This fraction does not differ considerably by vesting status or by eligibility for retiree health insurance. Among participants in the North Carolina retirement system, about one third of terminating workers choose to withdraw funds. However, this is an overestimate of potential leakages of retirement assets. Of those who request a LS, approximately 90% requested cash rather than rolling over directly to another tax qualified retirement account. This could reflect a perceived need for cash for current consumption or paying off debts. It might also be the result of poor understanding of the tax consequences of this choice and the need to save these funds for retirement. Of course, workers could still deposit the cashed-out benefits into an IRA themselves. The high rate of cash-outs suggests a sizeable reduction in retirement wealth accumulation and suggests that there is a considerable amount of “leakage” from the retirement savings of public sector workers in North Carolina. In a related paper, Clark and Morrill (2012) find that among workers who separated from public employment in 2007–2008 and were eligible for an immediate reduced annuity (age 50 with at least 20 years of service), 90% opted to receive an immediate annuity. Of those who were eligible for an immediate unreduced annuity (30 years of service, age 62 with 25 years of service, or age 65 with 5 years of service), 99% selected some type of immediate annuity offered by the plan. Thus, for retiring public employees in North Carolina, almost all select an annuity option and reject the offer of a LS. On the basis of these findings and those in the current paper, it appears that public sector retirees in North Carolina are not part of annuity puzzle and instead overwhelming select annuities when they are offered. One might expect that all non-vested terminations request a lump sum distribution since they are not entitled to a future retirement benefit and earn no interest on funds left with the system. Yet we observe that two thirds of those leaving the systems in 2007 and 2008 left their accounts open. Given the evidence on financial literacy and inertia in the general population, one might speculate that non-vested terminated workers are unaware of their ability to access these funds, do not understand that they have no claim on a future benefit, do not understand that the funds will not earn any interest, or simply do not take the time to request a LS. Economic and psychological studies indicate that workers often merely accept default options. In this case, the default is to leave the account open, thus we may think that workers leaving the system do not take the time to request a distribution of their pension account. To address this concern, the plan could change the default to be a LS for non-vested workers. Clark and Morrill (2012) find a similar result for non-vested workers over the age of 50 with only 36% of terminated workers aged 50 to 59 selecting a LS. While the proportion of those choosing a LS rises somewhat with advancing age (50% of those over age 65 chose the LS), it is hard to explain why these older non-vested terminating workers would leave their funds with the system. We postulate several factors that might explain why terminating workers for the most part do not appear to respond to the relative size of the PDVA and LS. Given that vested employees receive a 4% annual return when funds are left in the system, individuals can consider this as an investment option. However, regression analysis does not support the hypothesis that greater returns on investments outside the retirement system increase the likelihood that workers will request a LS There is some evidence that as the economy worsened, as proxied by state-level unemployment rates, individuals were less likely to withdraw funds. However, we have a limited time series available, so are not able to disentangle the effects economic conditions, labor market conditions, outside investment options, and confidence in the retirement system. We find that there may be an important role for defaults and workers may not be well informed about the value of their benefits.