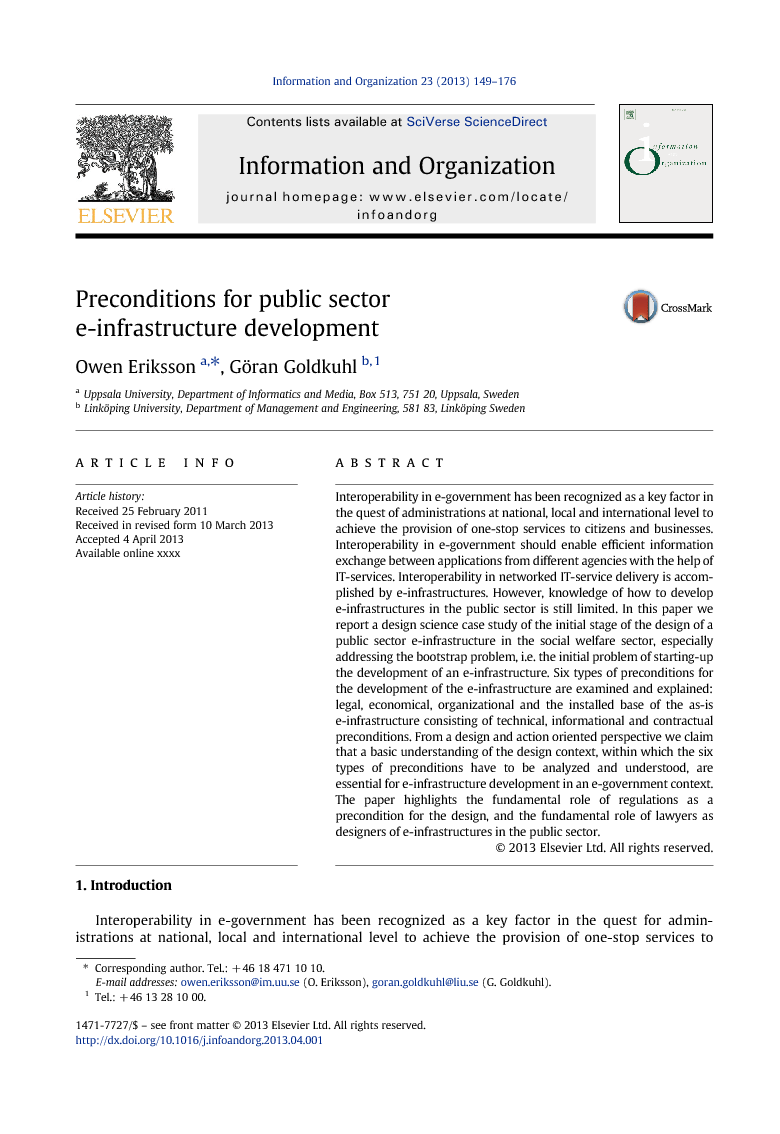 Interoperability in e-government has been recognized as a key factor in the quest for administrations at national, local and international level to achieve the provision of one-stop services to citizens and businesses (Charalabidis, Panetto, Loukis, & Mertins, 2008). Success in e-government requires agencies to work together across traditional boundaries to improve services significantly and to reduce operating costs. This implies that different applications have to be able to exchange information, which has shown to be problematic. The main cause is that their design scope remains confined within an organizational context. However the deployment of information systems over the last 30 years or more has resulted in the need for opening up closed applications and connecting them. Such an interoperable, networked and heterogeneous structure is called an information infrastructure (Hanseth and Lyytinen, 2004 and Hanseth and Lyytinen, 2010), or e-infrastructure (Edwards, Bowker, Jackson, & Williams, 2009). E-infrastructures typically form only when various applications merge allowing dissimilar applications to be linked into networks. This means quoting Hanseth and Lyytinen (2004) that “II [information infrastructure, e-infrastructure] design must recognize how the installed base of the as-is infrastructure and its scope and complexity influences the ongoing design”. This means that the design of e-infrastructure never starts in a green-field situation, and that design is “path-dependent and shaped by neighboring infrastructures, existing IT capabilities, user and designer learning, cognitive inertia, etc.” (Hanseth & Lyytinen, 2010 p. 4-5). The central problem is therefore how to integrate existing applications, which are locally controlled by different organizations into an interoperable distributed e-infrastructure of IT capabilities, i.e. potentially useful software and information (Edwards et al., 2009). The knowledge in regard to how to accomplish this is still limited. According to Sahay, Monteiro, and Aanestad (2009, p. 400), “we have little empirically based knowledge about the interplay of the political and technical configurations that arise during attempts to integrate multiple ICT systems.” E-infrastructures development implies distributed control because no single designer or organization is in full control of the design as is assumed in traditional information systems design literature (Edwards et al., 2007 and Hanseth and Lyytinen, 2010). This means that appropriate preconditions for distributed control have to exist, or have to be developed, in order to support cooperation in e-infrastructure development. The objective of this paper is to investigate the preconditions for e-infrastructure development for e-government, especially for the initial stage of e-infrastructure design. The problem at this stage is to be able to bootstrap, i.e. to initially develop a new IT capability with a minimal amount of resources, and to make it useful for a small user group, and after that sustain a cumulative adoption (ibid). The main empirical base is a longitudinal and still ongoing development effort called “The Social Allowance Project”. This project has the aim of connecting the applications of six national authorities with the applications of the municipalities (all together 290) in Sweden, in order to provide IT-services, i.e. useful IT capabilities, to the officers at social welfare offices. The main purpose of the paper is to investigate the process of e-infrastructure development in e-government from a design action perspective, focusing of the initial stage, and clarify different enabling and constraining preconditions in the context of the public sector. This will contribute with knowledge distinctly for e-government but also knowledge that is valuable for e-infrastructure development in general. The research approach is a combination of action research and design research. The researchers have participated in the design and construction of IT artifacts (design research) and also participated in change in different practice settings (action research). The paper proceeds as follows: Section 2 describes related research and basic concepts. The research approach is described in Section 3. After that in Section 4 the research process and design case study is presented. Section 5 analyses the findings from the case study and presents six types of preconditions which are grouped into four main categories: the as-is e-infrastructure, economical, organizational and legal preconditions which can all function as enablers and obstacles for 1) engaging in design and 2) conducting design, 3) the results and features of the design. In Section 6 an emerging theory for e-infrastructure design will be presented. Finally, in Section 7 the research contributions are summarized.