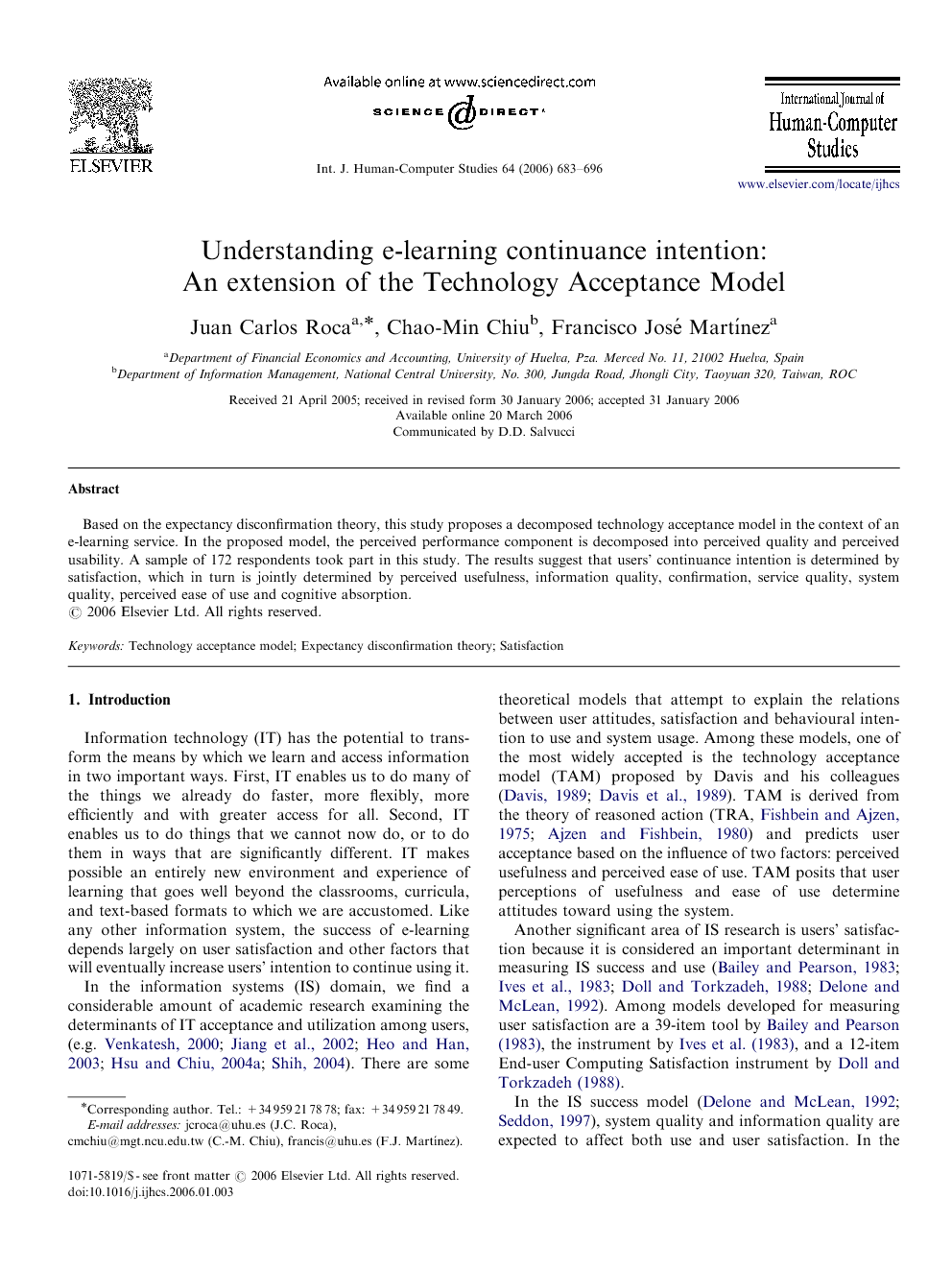 Based on the expectancy disconfirmation theory, this study proposes a decomposed technology acceptance model in the context of an e-learning service. In the proposed model, the perceived performance component is decomposed into perceived quality and perceived usability. A sample of 172 respondents took part in this study. The results suggest that users’ continuance intention is determined by satisfaction, which in turn is jointly determined by perceived usefulness, information quality, confirmation, service quality, system quality, perceived ease of use and cognitive absorption.

Information technology (IT) has the potential to transform the means by which we learn and access information in two important ways. First, IT enables us to do many of the things we already do faster, more flexibly, more efficiently and with greater access for all. Second, IT enables us to do things that we cannot now do, or to do them in ways that are significantly different. IT makes possible an entirely new environment and experience of learning that goes well beyond the classrooms, curricula, and text-based formats to which we are accustomed. Like any other information system, the success of e-learning depends largely on user satisfaction and other factors that will eventually increase users’ intention to continue using it. In the information systems (IS) domain, we find a considerable amount of academic research examining the determinants of IT acceptance and utilization among users, (e.g. Venkatesh, 2000; Jiang et al., 2002; Heo and Han, 2003; Hsu and Chiu, 2004a; Shih, 2004). There are some theoretical models that attempt to explain the relations between user attitudes, satisfaction and behavioural intention to use and system usage. Among these models, one of the most widely accepted is the technology acceptance model (TAM) proposed by Davis and his colleagues (Davis, 1989; Davis et al., 1989). TAM is derived from the theory of reasoned action (TRA, Fishbein and Ajzen, 1975; Ajzen and Fishbein, 1980) and predicts user acceptance based on the influence of two factors: perceived usefulness and perceived ease of use. TAM posits that user perceptions of usefulness and ease of use determine attitudes toward using the system. Another significant area of IS research is users’ satisfaction because it is considered an important determinant in measuring IS success and use (Bailey and Pearson, 1983; Ives et al., 1983; Doll and Torkzadeh, 1988; Delone and McLean, 1992). Among models developed for measuring user satisfaction are a 39-item tool by Bailey and Pearson (1983), the instrument by Ives et al. (1983), and a 12-item End-user Computing Satisfaction instrument by Doll and Torkzadeh (1988). In the IS success model (Delone and McLean, 1992; Seddon, 1997), system quality and information quality are expected to affect both use and user satisfaction. In the meantime, use and user satisfaction become the antecedents of individual impacts and organizational impacts. Seddon (1997) also included perceived usefulness as a determinant of user satisfaction. Rai et al. (2002) extended the Seddon model in which perceived ease of use, perceived usefulness, and information quality are depicted as the antecedents of satisfaction. Some studies have re-examined the IS success model including service quality as another important antecedent to user satisfaction (e.g. Kettinger and Lee, 1994 and Kettinger and Lee, 1997; Pitt et al., 1995; Negash et al., 2003; Wang and Tang, 2003; Landrum and Prybutok, 2004). Recently, the expectancy disconfirmation theory (EDT, Oliver, 1980) has emerged as an important candidate for explaining the variables that motivate individuals to continue using an IT (Bhattacherjee, 2001a and Bhattacherjee, 2001b; Khalifa and Liu, 2002a and Khalifa and Liu, 2002b; McKinney et al., 2002; Hayashi et al., 2004; Chiu et al., 2005; Lin et al., 2005). The EDT model proposes the causal relationship among the consumer's perceived performance, perceived disconfirmation, satisfaction and repurchase intention. We argue that in EDT, satisfaction is an important antecedent of repurchase intentions, and in TAM perceived usefulness, cognitive absorption, perceived ease of use, perceived behavioural control and subjective norm jointly determine usage intentions. Therefore, our research makes important contributions to the growing body of technology acceptance literature by examining the relationships between EDT and TAM variables in the same model. To better identify the factors contributing to the formation of the user's decision to continue using the e-learning system, this study extends TAM and EDT research by dividing perceived performance into two constructs, perceived quality and perceived usability. In this study, perceived quality is represented as information quality, service quality and system quality. Also, perceived usability is divided into perceived usefulness, cognitive absorption and perceived ease of use. In addition, confirmation, perceived behavioural control and subjective norm are included in our model.