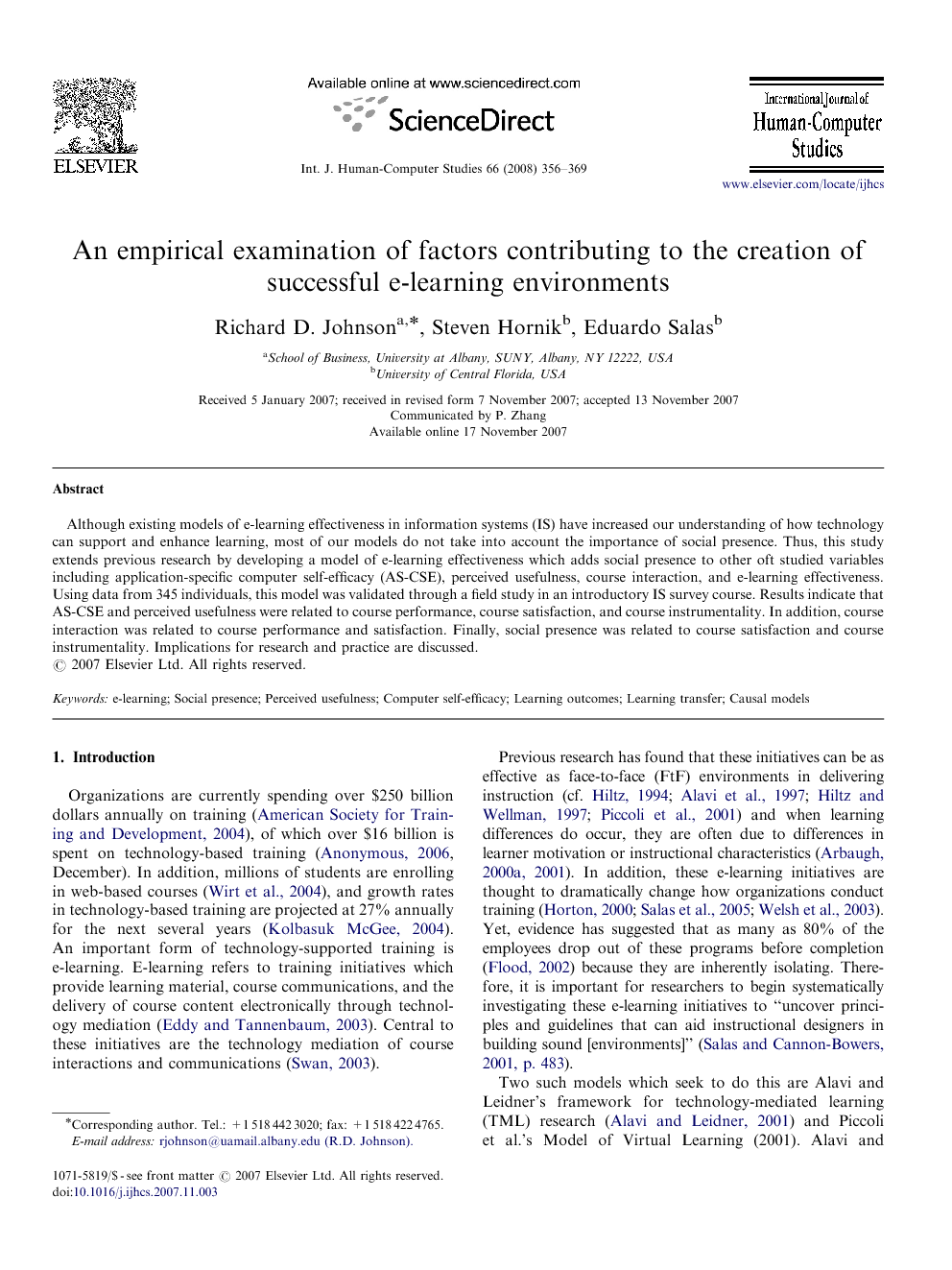 Although existing models of e-learning effectiveness in information systems (IS) have increased our understanding of how technology can support and enhance learning, most of our models do not take into account the importance of social presence. Thus, this study extends previous research by developing a model of e-learning effectiveness which adds social presence to other oft studied variables including application-specific computer self-efficacy (AS-CSE), perceived usefulness, course interaction, and e-learning effectiveness. Using data from 345 individuals, this model was validated through a field study in an introductory IS survey course. Results indicate that AS-CSE and perceived usefulness were related to course performance, course satisfaction, and course instrumentality. In addition, course interaction was related to course performance and satisfaction. Finally, social presence was related to course satisfaction and course instrumentality. Implications for research and practice are discussed.

Organizations are currently spending over $250 billion dollars annually on training (American Society for Training and Development, 2004), of which over $16 billion is spent on technology-based training (Anonymous, 2006, December). In addition, millions of students are enrolling in web-based courses (Wirt et al., 2004), and growth rates in technology-based training are projected at 27% annually for the next several years (Kolbasuk McGee, 2004). An important form of technology-supported training is e-learning. E-learning refers to training initiatives which provide learning material, course communications, and the delivery of course content electronically through technology mediation (Eddy and Tannenbaum, 2003). Central to these initiatives are the technology mediation of course interactions and communications (Swan, 2003). Previous research has found that these initiatives can be as effective as face-to-face (FtF) environments in delivering instruction (cf. Hiltz, 1994; Alavi et al., 1997; Hiltz and Wellman, 1997; Piccoli et al., 2001) and when learning differences do occur, they are often due to differences in learner motivation or instructional characteristics (Arbaugh, 2000a and Arbaugh, 2001). In addition, these e-learning initiatives are thought to dramatically change how organizations conduct training (Horton, 2000; Salas et al., 2005; Welsh et al., 2003). Yet, evidence has suggested that as many as 80% of the employees drop out of these programs before completion (Flood, 2002) because they are inherently isolating. Therefore, it is important for researchers to begin systematically investigating these e-learning initiatives to “uncover principles and guidelines that can aid instructional designers in building sound [environments]” (Salas and Cannon-Bowers, 2001, p. 483). Two such models which seek to do this are Alavi and Leidner's framework for technology-mediated learning (TML) research (Alavi and Leidner, 2001) and Piccoli et al.'s Model of Virtual Learning (2001). Alavi and Leidner's framework argues that information technology and course design affect learning processes and outcomes, with the assumption that the most effective outcomes will occur when technology and pedagogy are integrated. The Model of Virtual Learning is related to the TML model, in that it also focuses on technology and pedagogy, but it also brings in the importance of student and instructor characteristics and skills. Together, these models argue that course pedagogy and design, learner characteristics, instructor characteristics, the technology used, and peer interactions each contribute to the effectiveness of learning outcomes. Unfortunately, neither of these models addresses an important concern of learning researchers (i.e. the social context in which learning occurs). Unlike traditional FtF learning environments, technology inserts a layer of mediation between course interactions. This mediation creates a potential barrier to the social context of learning. Thus, e-learning environments “can be both highly interactive and simultaneously isolating because of the inherent difficulties of developing cohesiveness and true connectedness among students” (Stonebraker and Hazeltine, 2004, p. 210). In addition, one of the most common complaints by those participating in e-learning environments is a lack of a shared learning environment and connections with their peers (Moore, 2002). To effectively learn, students must be able to leverage the technology to support these peer connections and social presence. Social presence is “the degree of salience of the other person in the interaction and the consequent salience of the interpersonal relationships” (Short et al., 1976, p. 65) and has been argued to be a central factor in the creation of the shared learning environments necessary for the most effective e-learning (Gunawardena, 1995; Gunawardena and Zittle, 1997; Richardson and Swan, 2003). Therefore, the goal of this study was to expand on previous IS research frameworks to specifically address the importance of social presence. Given that course interactions in e-learning are mediated by information technology, we also reviewed the previous frameworks for additional variables which could most directly play a role in how students would leverage and use the technology in the course. These variables included application-specific computer self-efficacy (AS-CSE), perceived usefulness, and course interaction. The remainder of this paper is organized as follows. First, we present a brief overview of the e-learning environment along with the research model. Second, we present the constructs and hypotheses. Next, we discuss the research context and methods. Finally, we present the results, along with a discussion of the findings, implications, and directions for future research.

This research was motivated by the desire to gain a better understanding the role of social presence in IS models of e-learning. A secondary goal of this study was to investigate its importance in the context of three additional factors which should affect how individuals leverage the technology for learning: AS-CSE, interaction, and perceived usefulness. The results of the study suggest that social presence does indeed play an important role in e-learning effectiveness and should be included in future models of e-learning. In addition, the results suggest that researchers, educators, and trainers should focus efforts on developing mechanisms that encourage development of shared social learning environments to enhance e-learning effectiveness.