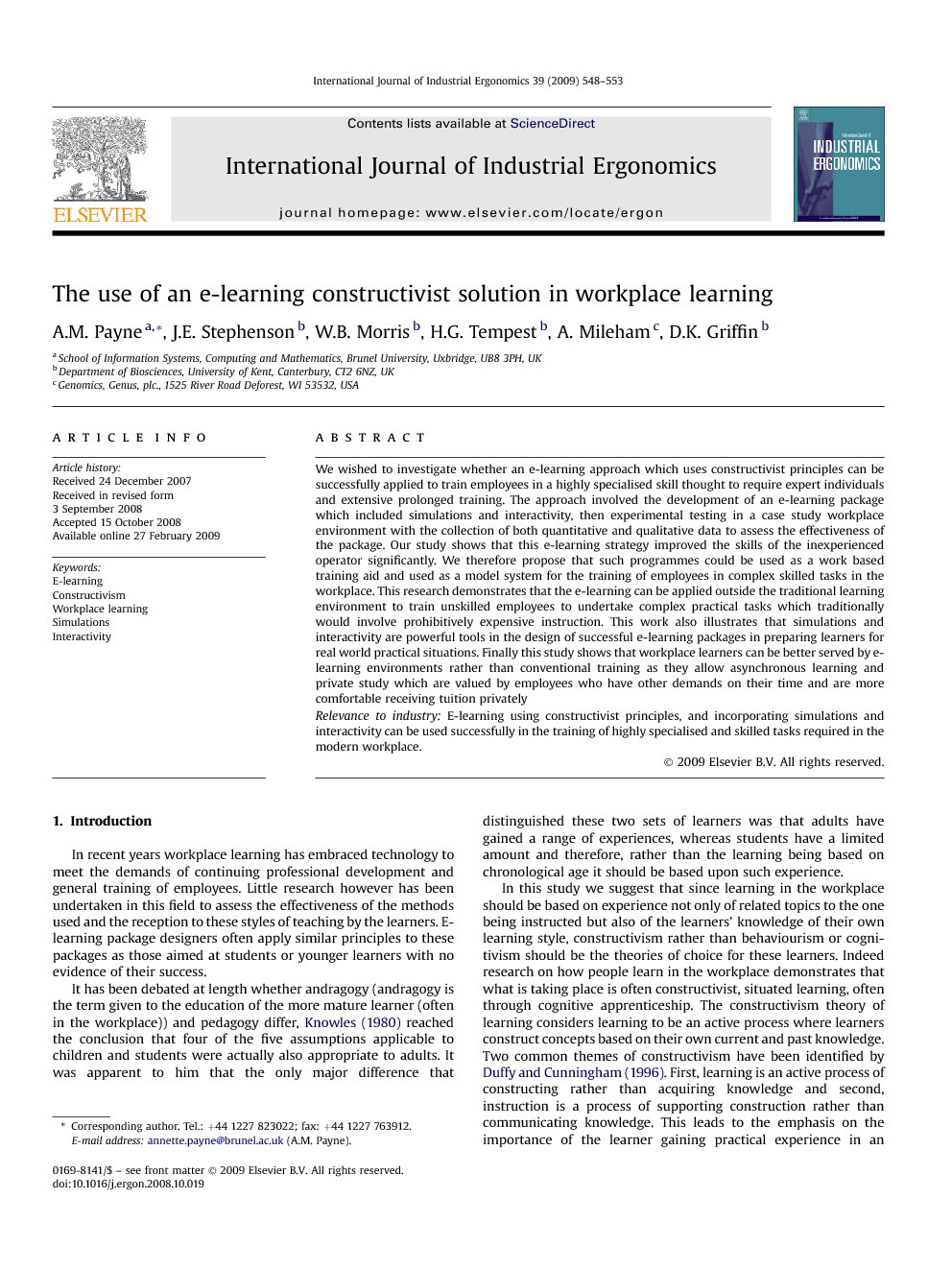 We wished to investigate whether an e-learning approach which uses constructivist principles can be successfully applied to train employees in a highly specialised skill thought to require expert individuals and extensive prolonged training. The approach involved the development of an e-learning package which included simulations and interactivity, then experimental testing in a case study workplace environment with the collection of both quantitative and qualitative data to assess the effectiveness of the package. Our study shows that this e-learning strategy improved the skills of the inexperienced operator significantly. We therefore propose that such programmes could be used as a work based training aid and used as a model system for the training of employees in complex skilled tasks in the workplace. This research demonstrates that the e-learning can be applied outside the traditional learning environment to train unskilled employees to undertake complex practical tasks which traditionally would involve prohibitively expensive instruction. This work also illustrates that simulations and interactivity are powerful tools in the design of successful e-learning packages in preparing learners for real world practical situations. Finally this study shows that workplace learners can be better served by e-learning environments rather than conventional training as they allow asynchronous learning and private study which are valued by employees who have other demands on their time and are more comfortable receiving tuition privately

This study has shown that using e-learning best practice principles and a constructive learning approach, the complex and skilled task of chromosome analysis in boars can be learned by trainees with no previous ability. The package was designed to be learner paced and allowed asynchronous learning of the contents often favoured by mature trainees with other constraints on their time. We made full use of the “Fidelity Principle” (van Merrienboer and Kester, 2005) in making the tasks and test as realistic as possible using digital images of real chromosomes and known chromosomal aberrations. A problem based learning approach was adopted with the package encouraging the trainees to “Have a Go” at karyotyping and receive formative feedback before undertaking the summative test at the end of the exercise. The karyotyping problems were varied (adhering to the “Variability Principle”; van Merrienboer and Kester; 2005) to increase the trainees exposure to many different chromosomal abnormalities thus increasing their knowledge index. This package uses the power of simulation to give the learner a near reality PBL experience. Many professions have successfully used simulation/simulators. The advantages are that they reduce cost and provide authentic scenarios to participants that would otherwise take years to experience, resulting in a better trained, more capable individual. Most have used simulations for a variety of reasons mostly to gain experience or practice a skill, but until recently, few have used simulation as a teaching tool (Smith and Boyer, 1996). The issue of computer simulations as adaptations for student practical classes however is increasingly apparent in the literature (e.g. Dewhurst et al., 1994, Gibbons et al., 2004, Heerman and Fuhrmann, 2000, Hughes, 2000, Leathard and Dewhurst, 1995, Maury and Gascuel, 1999 and Modell, 1989). We show that this approach can be successfully transferred from the classroom to the workplace. We have previously compared karyotyping skills of undergraduates using human KaryoLab simulation e-learning package to using the traditional “scissors and glue” approach within the confines of a practical laboratory, supported by an appropriate lecture (Gibbons et al., 2004). In the current study, the “practical class” was taken out of the university environment and the lecture was replaced by a computer-based tutorial. The highly significant improvement in skills post-tutorial provides compelling evidence that the tutorial itself facilitated the learning process. Research into university practical classes (e.g. Dewhurst et al., 1994, Gibbons et al., 2004 and Heerman and Fuhrmann, 2000), although usually performed on individuals who are 18 or over, essentially ask questions of pedagogy. In this study we propose that the question asked relates more to “andragogy” (Knowles, 1984) which has received relatively little attention in the literature compared to pedagogy. Knowles (1984) states that the more mature learner needs to know why they need to learn something and learns best when the topic is of immediate relevance to their job. Moreover adults need to learn by experience, partly from their mistakes and learn best when they can approach learning as a problem-solving exercise. This has been demonstrated by Ivancic and Hesketh (2000) in a driving simulation environment where they eloquently showed that making errors enhanced and increased the efficacy of the learning. In this study participants made less errors during real life driving after being allowed to make errors using the simulation. In this study we propose that we have developed an approach that incorporates all these principles. The package therefore demonstrates that the use of PBL and computer simulation is a powerful learning tool in the work place. It was equally crucial that the simulations reflected reality with an easy to use interface in order to facilitate the learning process. The ability of individuals in pig breeding companies to analyse boars with reasonable accuracy could have significant ramifications for improvement of prolificacy in the pig breeding industry as a whole. A conservative estimate is that that the UK pig breeding industry is losing around £9.5 million as a result of hypoprolific boars (Sygen International, personal communication) and therefore prolificacy could be improved dramatically as a result of education expedited, in part, by this e-learning package. In principle, a set of the basic laboratory equipment required for chromosome analysis is easily acquired and many labs are already equipped with microscopes. It is also worth noting that, in clinical laboratories, 100% accuracy in diagnosis is essential as the consequences of failure could lead to misdiagnosis of a severely affected birth (Wolstenholme, 1992). In contrast, for boar screening, the consequences are financial and any relatively low-cost solution to even partly solve the problem would be an improvement on the status quo where, in many centres, no boars are screened at all (Popescu et al., 1984; Pinton, 2000). While in a clinical laboratory it is essential to look for very subtle aberrations (Wolstenholme, 1992) for boars, relatively overt and simple aberrations are common in sub-fertile boars (e.g. Ducos et al., 1996, Ducos et al., 1997, Ducos et al., 1998a, Ducos et al., 1998b and Pinton et al., 2000; Ducos, personal communication). Therefore, although chromosome analysis is a highly skilled pursuit in clinical laboratories, such accuracy is desirable though not essential for the screening for relevant abnormalities in boars; therefore the use of less experienced staff is appropriate. In this study the experiments described here were performed on a series of “volunteers” who did the tutorials in their spare time. Despite this, they ultimately performed the exercises with a mean 73% accuracy and spotted the presence or absence of an abnormality with a mean 82% accuracy, a success rate more than adequate for pig breeding. Someone with responsibility to do this in a “real world” situation would perhaps spend more time honing their skills and increase these percentages further. In conclusion we present a stand alone e-learning solution to the teaching of a complex task which at present is seen to be too costly and specialised to be worth sending employees on a traditional training course to learn. The use of constructivism principles to aid its design, along with acknowledged e-learning and computer usability best practice demonstrates that this medium can be used successfully in the training of highly specialised and skilled tasks required in the modern workplace.