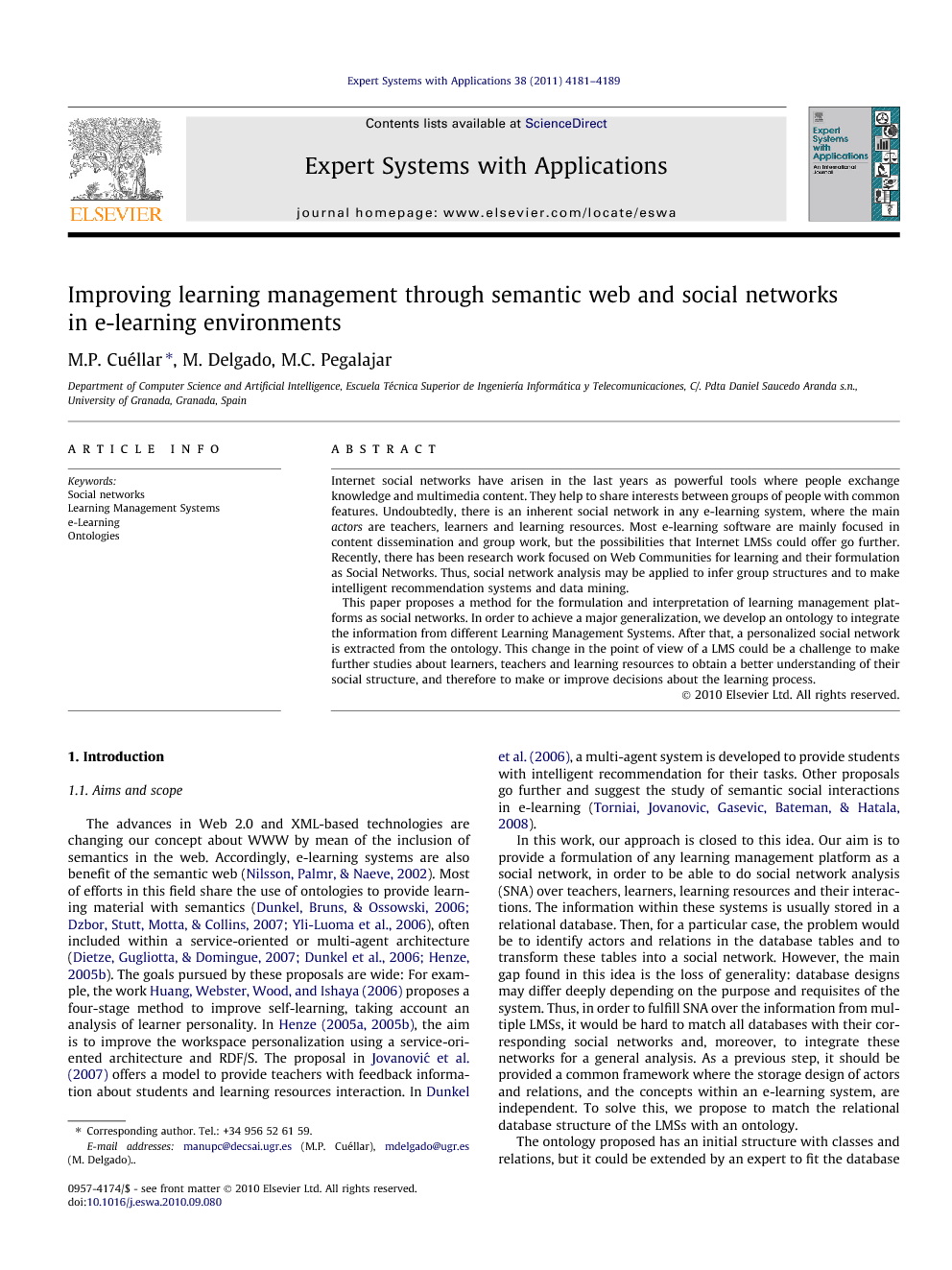 Internet social networks have arisen in the last years as powerful tools where people exchange knowledge and multimedia content. They help to share interests between groups of people with common features. Undoubtedly, there is an inherent social network in any e-learning system, where the main actors are teachers, learners and learning resources. Most e-learning software are mainly focused in content dissemination and group work, but the possibilities that Internet LMSs could offer go further. Recently, there has been research work focused on Web Communities for learning and their formulation as Social Networks. Thus, social network analysis may be applied to infer group structures and to make intelligent recommendation systems and data mining. This paper proposes a method for the formulation and interpretation of learning management platforms as social networks. In order to achieve a major generalization, we develop an ontology to integrate the information from different Learning Management Systems. After that, a personalized social network is extracted from the ontology. This change in the point of view of a LMS could be a challenge to make further studies about learners, teachers and learning resources to obtain a better understanding of their social structure, and therefore to make or improve decisions about the learning process.

Social network analysis is today a hot topic across the web. Most social networks theory methods have been developed decades ago in other disciplines, but the advances in Semantic Web and user experiences in Internet have attracted interest from research areas in computer science in the last years. The easy representation of a network, efficient methods for analysis and the huge amount of data existing in the web is a challenge for research regarding data mining, knowledge discovery, business models testing, psychology or knowledge engineering between others. However, a gap is found when we try to apply SNA over the existing distributed data storage models. For example, relational databases integration and their semantic interpretability are also a great problem being studied currently. In this work, we deal with the semantic integration of databases using ontologies and its application in e-learning. This integration is only the start point to obtain social networks from a shared knowledge base of databases with different scheme designs. Furthermore, the hierarchical structure of ontologies allows to make SNA at different levels, depending on the classes and the relations of interest in our study. We have provided a method to obtain a personalized social network depending on the analyst’s interests in a Learning Management System users study. Moreover, we have described some classic methods of graphs theory and give some suggestions about how they could be used to analyze an e-learning ecosystem. The future of SNA in e-learning is promising, but further work should be still coming. The implementation of LMSs using SNA features could provide a great help in virtual teaching environments, specially combined with current pervasive computing techniques. On the other hand, the improvement and dissemination of more powerful social network representation and analysis techniques should be tested in real applications. For example, fuzzy social networks would overcome the crisp limitations of classic networks, and the use of hypergraphs could give a major expressivity in applications in which actors have third-party relations. Moreover, the mathematical category theory could fill some gaps about the reasoning over the network, its representation and its interpretation. We think that the dynamic evolution of social networks in the Internet is also a promising issue. Methods for dynamic social network analysis already exist, and their application over e-learning systems in particular and in general the WWW could be useful to study virtual communities evolution.