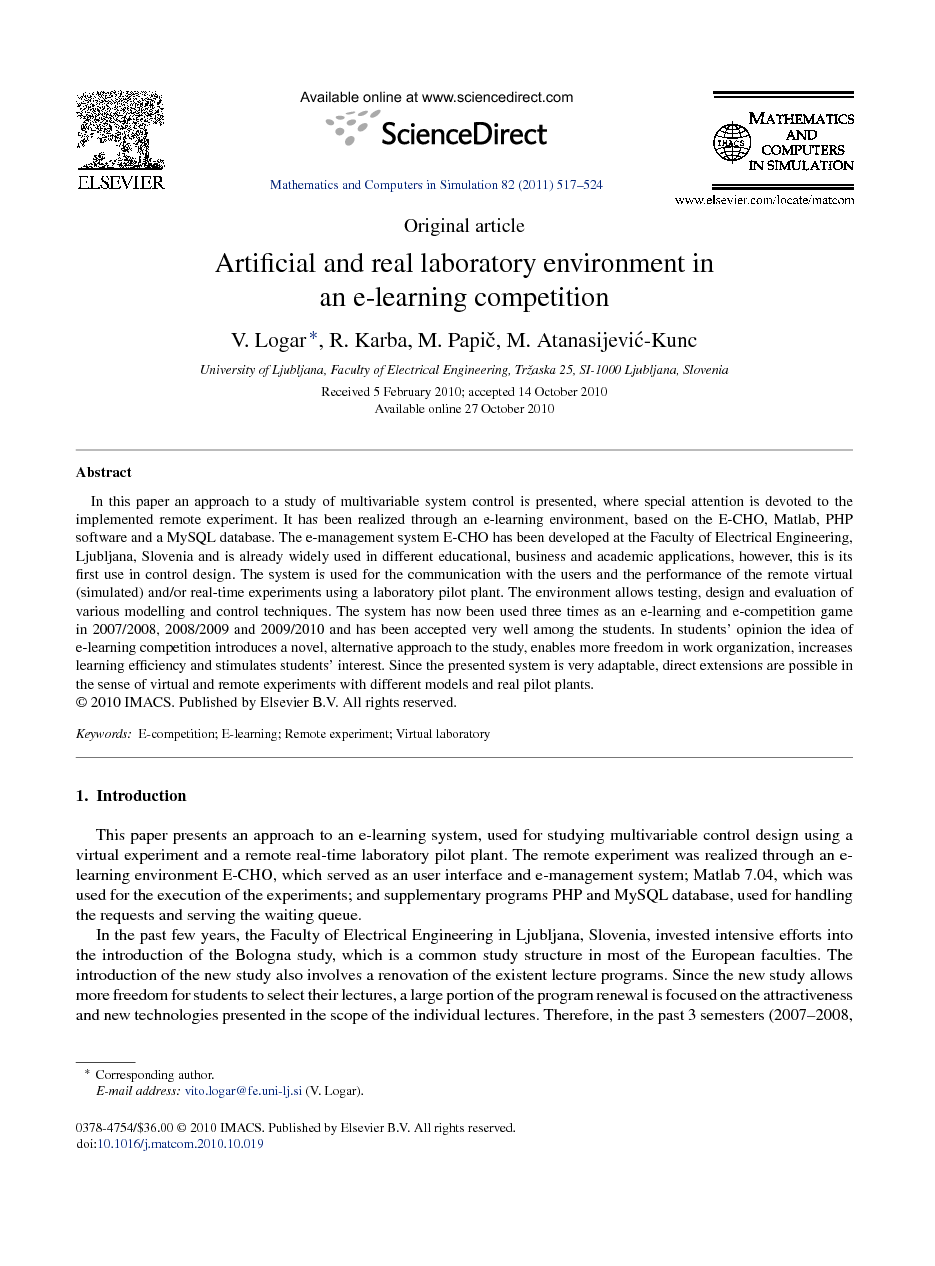 In this paper an approach to a study of multivariable system control is presented, where special attention is devoted to the implemented remote experiment. It has been realized through an e-learning environment, based on the E-CHO, Matlab, PHP software and a MySQL database. The e-management system E-CHO has been developed at the Faculty of Electrical Engineering, Ljubljana, Slovenia and is already widely used in different educational, business and academic applications, however, this is its first use in control design. The system is used for the communication with the users and the performance of the remote virtual (simulated) and/or real-time experiments using a laboratory pilot plant. The environment allows testing, design and evaluation of various modelling and control techniques. The system has now been used three times as an e-learning and e-competition game in 2007/2008, 2008/2009 and 2009/2010 and has been accepted very well among the students. In students’ opinion the idea of e-learning competition introduces a novel, alternative approach to the study, enables more freedom in work organization, increases learning efficiency and stimulates students’ interest. Since the presented system is very adaptable, direct extensions are possible in the sense of virtual and remote experiments with different models and real pilot plants.

This paper presents an approach to an e-learning system, used for studying multivariable control design using a virtual experiment and a remote real-time laboratory pilot plant. The remote experiment was realized through an e-learning environment E-CHO, which served as an user interface and e-management system; Matlab 7.04, which was used for the execution of the experiments; and supplementary programs PHP and MySQL database, used for handling the requests and serving the waiting queue. In the past few years, the Faculty of Electrical Engineering in Ljubljana, Slovenia, invested intensive efforts into the introduction of the Bologna study, which is a common study structure in most of the European faculties. The introduction of the new study also involves a renovation of the existent lecture programs. Since the new study allows more freedom for students to select their lectures, a large portion of the program renewal is focused on the attractiveness and new technologies presented in the scope of the individual lectures. Therefore, in the past 3 semesters (2007–2008, 2008–2009 and 2009–2010), at the Department of Automatic Control, in the frame of Multivariable systems lectures, we decided to introduce an alternative instead of classic approach to laboratory exercises – an e-learning system, including virtual experiment and a real laboratory pilot plant. In previous years the laboratory practices comprised of classic multivariable control design using different laboratory pilot plants. The work in this manner required the students to be present at each practice, where students in groups of two solved different problems regarding multivariable control. The newly introduced laboratory practices, using the developed e-learning system are very similar to the past ones from the design point of view, however, students’ work is no longer obliged to the actual laboratory and can be performed at any time and on any computer with access to the internet, running Matlab software [5]. The Matlab software is in fact not needed for the actual performance of the experiment or the communication with the system, but to find a solution to the given problem. The implementation of the system included everything else necessary for the successful execution of the experiments (pilot plant, visualization, data acquisition, signal measurements, etc.); therefore, no additional programs (except the internet browser and Matlab software) were needed. The e-learning system was built in a manner that allowed students to examine open- and closed-loop characteristics of the virtual model and the pilot plant, using appropriate control structures. In this way different model characteristics, needed for the control design, could be obtained. The complexity of the controller could then be defined by users themselves and could range from the simplest proportional controllers to a complex combination of observers, feed-forward, output and state controllers. To gain more students’ interest, to stimulate them to put more effort into the exercises and to make them more interesting the e-learning experiment was designed as an e-competition. The control design results of each group were recorded and later compared to the solutions of other groups to obtain the best control structure and therefore the winning, second and third group. The final classification of the groups was then used as a basis for the experiment evaluation and final grade of each individual. Since the e-learning approach presented, introduces a subject specific e-learning implementation, extensive interdisciplinary cooperation was required during application development, as no existing commercial or open source e-learning software could be used without adaptations and further development. Thus, the technical basis of the idea was realized using the E-CHO software, which is already extensively used for a variety of e-learning solutions in different target academic and business environments (more than 10,000 users in corporate and academic institutions), but has yet never been used in a configuration with a virtual or real pilot plant. The E-CHO environment was developed exclusively at the Faculty of Electrical Engineering, in the Laboratory for Telecommunications (LTFE), while the whole e-learning environment was built in cooperation of the LTFE and the laboratory for modelling, simulation and control (LMSV and LAMS) [1]. The ideas presented in this paper are alike to the work done by Yang and Alty [12], Grimaldi and Rapuano [2], and Hoffman et. al. [3], however, beside the similar approach, the architecture of the presented system and it’s software and hardware equipment are completely different. The paper is structured as follows. In Section 2, both hardware and software realizations of the project are discussed. Section 3 explains the idea of the e-competition project through which the transition to distance learning approach is enabled. In Section 4 some future plans are presented. The paper ends with some concluding remarks.