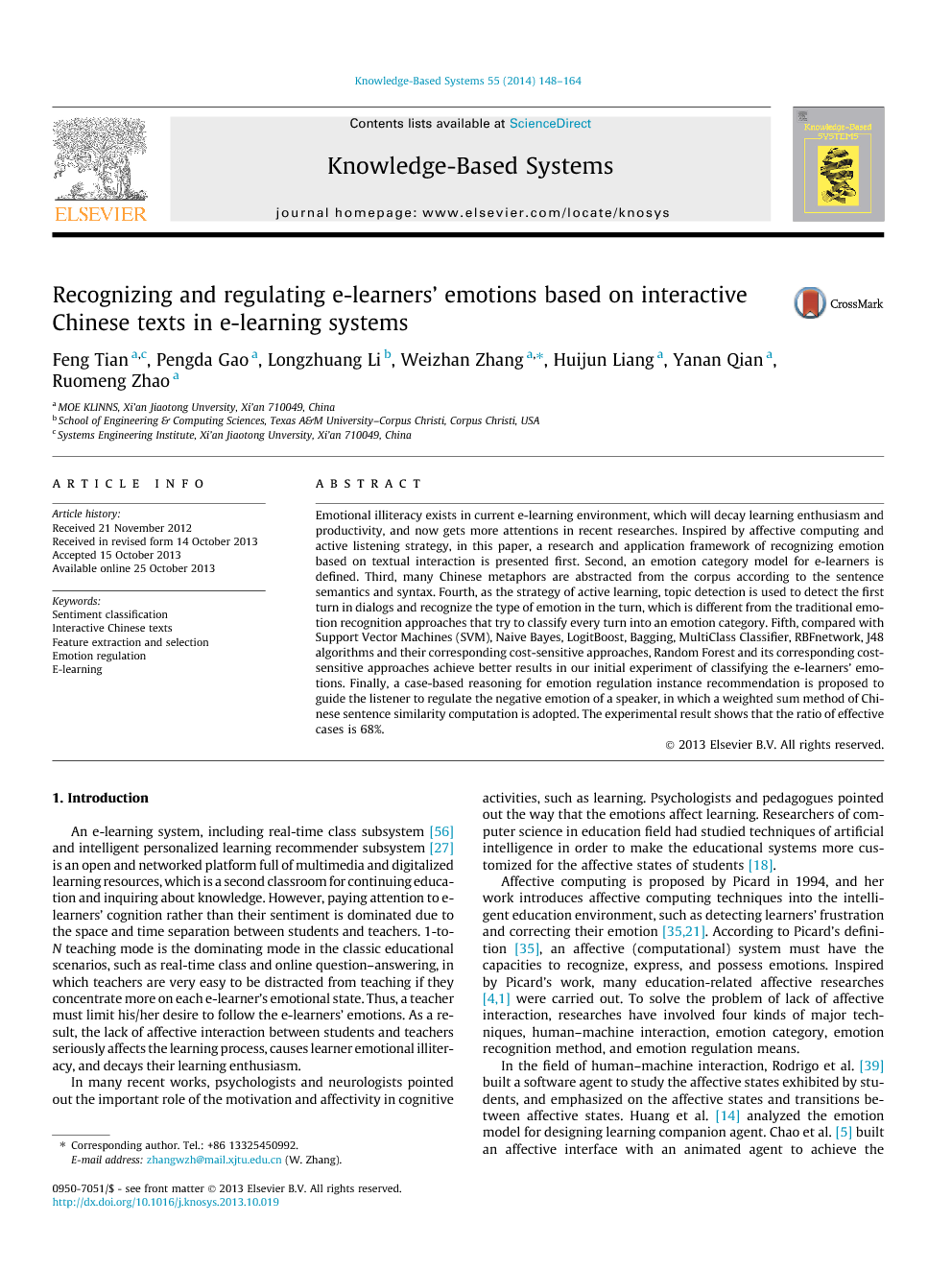 Emotional illiteracy exists in current e-learning environment, which will decay learning enthusiasm and productivity, and now gets more attentions in recent researches. Inspired by affective computing and active listening strategy, in this paper, a research and application framework of recognizing emotion based on textual interaction is presented first. Second, an emotion category model for e-learners is defined. Third, many Chinese metaphors are abstracted from the corpus according to the sentence semantics and syntax. Fourth, as the strategy of active learning, topic detection is used to detect the first turn in dialogs and recognize the type of emotion in the turn, which is different from the traditional emotion recognition approaches that try to classify every turn into an emotion category. Fifth, compared with Support Vector Machines (SVM), Naive Bayes, LogitBoost, Bagging, MultiClass Classifier, RBFnetwork, J48 algorithms and their corresponding cost-sensitive approaches, Random Forest and its corresponding cost-sensitive approaches achieve better results in our initial experiment of classifying the e-learners’ emotions. Finally, a case-based reasoning for emotion regulation instance recommendation is proposed to guide the listener to regulate the negative emotion of a speaker, in which a weighted sum method of Chinese sentence similarity computation is adopted. The experimental result shows that the ratio of effective cases is 68%.

In this paper, first, we propose an e-learner oriented emotion category, in which, the interpersonal and intrapersonal category is emphasized, so as to understand the mutual interaction of the e-learners’ emotions in text-based interaction. Second, a framework of our research is given, which includes recognizing and regulating the e-learner’s emotions based on interactive Chinese texts. Third, after the affective word base and the rules of feature extraction are described, first turn in dialogs is detected, and Random Forest based classification algorithm and its corresponding cost-sensitive approach are chosen according to performance comparison with other 14 classification algorithms, including SVM, Naive Bayesian model, LogitBoost, Bagging, MultiClass Classifier, RBFnetwork, J48 and their combination with the cost-sensitive classifier. Finally, emotion regulation based on active listening is introduced, in which a successful emotion regulation case base is built manually, and the computation of similarity between short sentences and emotion regulation instances is presented. Experiment results show that our method have positive role in emotion regulation in interactive text based applications. However, our work is still in trial and only partially supports our idea. The future work is to enlarge the size of our emotion word base, use larger trained dataset and develop high efficient algorithm to ensure the precision of classification on 17 emotion types in the future, or verify the influence of feature age and its distribution on emotion classification. In addition, more features should be selected or discovered according to theories of syntax, discourse analysis, psychology, etc. Moreover, the EES database needs to be built or updated by machine-learning algorithm. The self-evaluation mechanism of emotion regulation instances is not considered in this paper and will be done in further research.