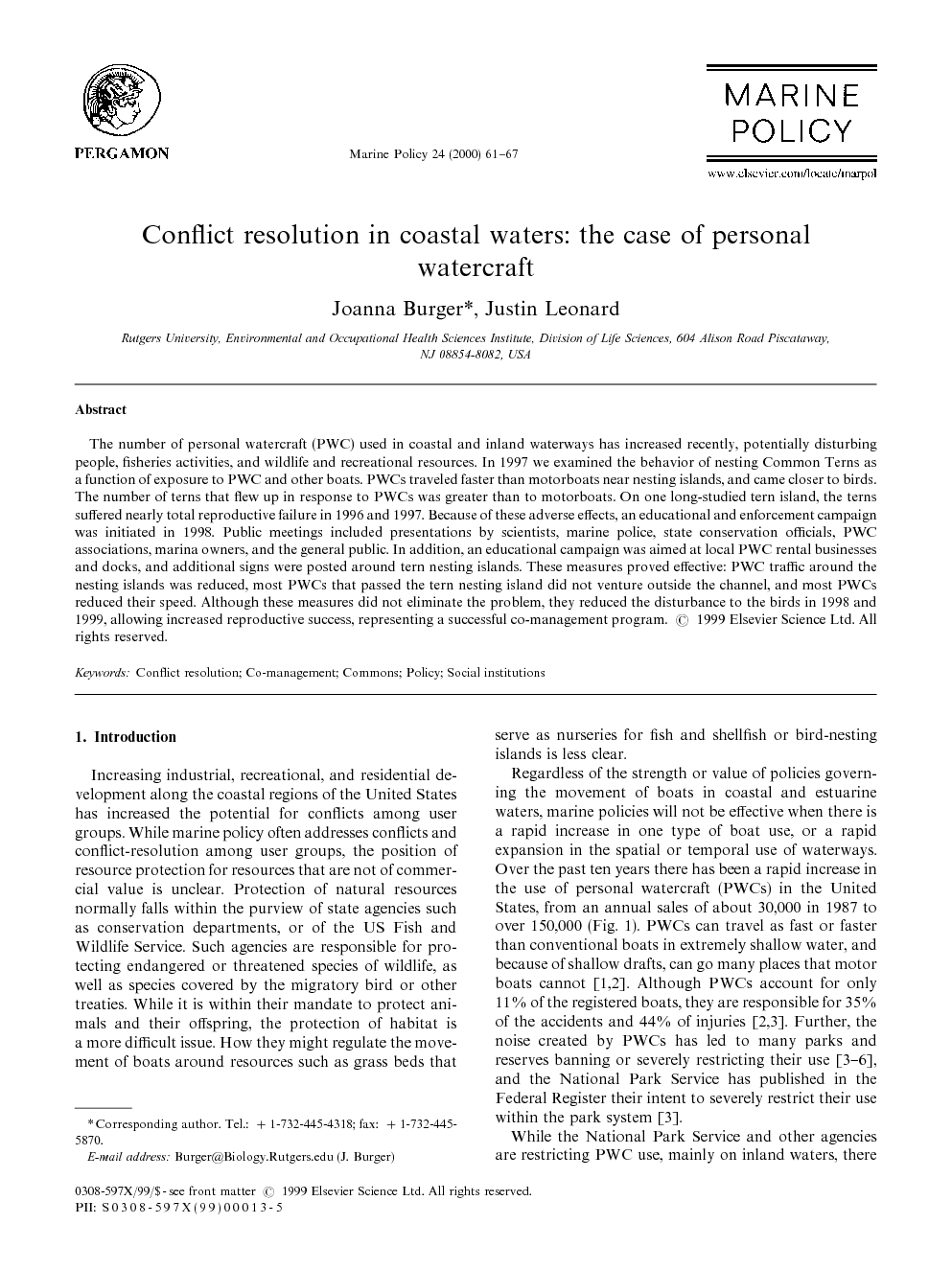 The number of personal watercraft (PWC) used in coastal and inland waterways has increased recently, potentially disturbing people, fisheries activities, and wildlife and recreational resources. In 1997 we examined the behavior of nesting Common Terns as a function of exposure to PWC and other boats. PWCs traveled faster than motorboats near nesting islands, and came closer to birds. The number of terns that flew up in response to PWCs was greater than to motorboats. On one long-studied tern island, the terns suffered nearly total reproductive failure in 1996 and 1997. Because of these adverse effects, an educational and enforcement campaign was initiated in 1998. Public meetings included presentations by scientists, marine police, state conservation officials, PWC associations, marina owners, and the general public. In addition, an educational campaign was aimed at local PWC rental businesses and docks, and additional signs were posted around tern nesting islands. These measures proved effective: PWC traffic around the nesting islands was reduced, most PWCs that passed the tern nesting island did not venture outside the channel, and most PWCs reduced their speed. Although these measures did not eliminate the problem, they reduced the disturbance to the birds in 1998 and 1999, allowing increased reproductive success, representing a successful co-management program.

Increasing industrial, recreational, and residential development along the coastal regions of the United States has increased the potential for conflicts among user groups. While marine policy often addresses conflicts and conflict-resolution among user groups, the position of resource protection for resources that are not of commercial value is unclear. Protection of natural resources normally falls within the purview of state agencies such as conservation departments, or of the US Fish and Wildlife Service. Such agencies are responsible for protecting endangered or threatened species of wildlife, as well as species covered by the migratory bird or other treaties. While it is within their mandate to protect animals and their offspring, the protection of habitat is a more difficult issue. How they might regulate the movement of boats around resources such as grass beds that serve as nurseries for fish and shellfish or bird-nesting islands is less clear. Regardless of the strength or value of policies governing the movement of boats in coastal and estuarine waters, marine policies will not be effective when there is a rapid increase in one type of boat use, or a rapid expansion in the spatial or temporal use of waterways. Over the past ten years there has been a rapid increase in the use of personal watercraft (PWCs) in the United States, from an annual sales of about 30,000 in 1987 to over 150,000 (Fig. 1). PWCs can travel as fast or faster than conventional boats in extremely shallow water, and because of shallow drafts, can go many places that motor boats cannot 1 and 2. Although PWCs account for only 11% of the registered boats, they are responsible for 35% of the accidents and 44% of injuries 2 and 3. Further, the noise created by PWCs has led to many parks and reserves banning or severely restricting their use 3, 4, 5 and 6, and the National Park Service has published in the Federal Register their intent to severely restrict their use within the park system [3]. While the National Park Service and other agencies are restricting PWC use, mainly on inland waters, there are severe conflicts in coastal regions with recreational and commercial fishermen 7 and 8. They find that PWCs disturb them while they are pulling nets or traps, and disrupt their gear while it is set. Moreover, a wide range of residents living in coastal regions rank PWCs as the most severe environmental problem in the estuaries, above other problems such as chemical pollution, “junk or debris”, overfishing, and boat oil [7]. In addition to disrupting the activities of other people in marine environments, PWCs have the potential for disturbing a wide range of natural resources, including spawning fish, fish and shellfish nurseries, and nesting birds 3, 5 and 6. Data on such disturbances, however, are usually anecdotal. However, from 1976 until the present, one of us (JB) has been monitoring population dynamics and reproductive success of common terns (Sterna hirundo) in Barnegat Bay [9]. Although Common Terns usually return to the same island to breed each year, there is some natural movement among nesting islands. Since the early 1990s, Little Mike's Island has contained one of the largest nesting colonies in Barnegat Bay, and prior to 1996 the colony of 250 to 500 nesting pairs was highly successful (fledging over 1 young per nest, 10). In 1996 there was a sharp increase in PWCs in the vicinity, and Common Terns nesting on Mike's Island were frequently disturbed and flew from their nests, and there was no reproduction. This prompted us to investigate the effects of PWCs on the nesting success of Common Terns. Our initial objective was to document the response of Common Terns to PWCs over a two year period (breeding seasons of 1997 and 1998). However, the results were so dramatic in 1997 that they stimulated interest in resolving the conflicts between the birds and PWCs. In this paper we describe the effects of boats, including PWCs, on nesting terns in 1997 [10], describe management strategies employed in the winter of 1997–1998 to mitigate the effects of PWCs on nesting terns, and examine the efficacy of these measures on nesting terns in 1998. Our overall objective in 1998 was to determine if the methods were successful so that they could serve as a pilot for management elsewhere along the New Jersey coast.

One of the most difficult marine policy issues is how to resolve conflicts between different user groups. While this usually takes the form of conflicts between people who want to use estuaries and bays in different ways, there are also conflicts between people and resources. In Barnegat Bay, and elsewhere along the Atlantic coast where there is industrial and fisheries, recreational, and residential development, there is growing conflict among people with respect to the type of allowable development, and the relative proportions of each. Although Fig. 7 is simplistic in that there are many other users of our estuaries, it suggests that conflict resolution is extremely important during the early phases of rapid development. The potential problems are exacerbated by conflicts with natural resources. There are many potential conflicts that arise between different types of boat operators and both land-owners and resources (Fig. 7). These conflicts are exaggerated because PWCs can both move faster and farther into areas not previously available to most types of boats. Further, the rapid increase in PWCs, both in numbers and proportionate to other boats, has added a strain to the biological and social environment. Natural resource conflicts in estuaries occur both in water and onshore [3]. Conflicts with birds are perhaps easier to measure and assess than are those with other natural resources because birds feed, roost and breed on land or on coastal islands where observation and monitoring can be done 14 and 15. The conflicts that have been most intensively studied have occurred on sandy beaches where nesting or foraging birds come in conflict with development or recreation 15, 16, 17, 18 and 19. For the most part, birds nesting or feeding on estuarine islands have avoided such conflicts because the islands can be reached only by boat, and historically, people avoided the mosquito-laden salt marsh islands or those where nesting bushes were surrounded by dense stands of Poison Ivy 15 and 16. Moreover, shallow water around many salt marsh islands prevents most people in motor boats from venturing too close. This changed dramatically with PWCs that not only can drive close to salt marsh islands, but can skim the shorelines at high tides. Because of the problems with PWCs, the state of New Jersey attempted to control PWCs by state regulation in 1996. However, a bill to require licensing was tabled, despite popular support, because of lobbyist who argued that there was a lack of data concerning accident rates, other human-related problems, and resource damages. The results of the 1997 study with Common Terns nesting on Little Mike's Island in Barnegat Bay indicated clear and devastating effects on reproductive success [11]. The results were sufficiently clear to stimulate widespread local interest in action. The combined efforts of local residents, marina and PWC rental agencies, national PWC association, extension specialists, scientists, state biologists, and state police succeeded in reducing both the PWC traffic by the nesting island, and the speed and location of the PWC movement by the island. In 1998 there was no difference in the speed of motorboats and PWCs; both generally observed the “no wake” zones and moved only through the channel. The Common Terns were not unduly disturbed in 1998 and they fledged nearly 1 young per nest, similar to reproductive success prior to the influx of PWCs. This example illustrates several principles that are relevant to establishing marine policy in other communities: (1) action was promulgated at the local level, (2) discussions included all the relevant users of the water surface, (3) discussions were open to everyone, regardless of their direct interest, (4) discussions were not dominated by either state biologists or state police, (5) no extreme measures were suggested that eliminated PWCs from Barnegat Bay generally, and (6) actions occurred only after everyone was involved in the process. In general, there was agreement that the avian resources of Barnegat Bay should be protected, and that very specific measures were needed to protect the vulnerable nesting birds. With this in mind, people worked together to figure out the most efficient way to achieve this goal. We suggest that the procedures outlined above fit the more recent co-management models proposed for fisheries 20, 21, 22, 23 and 24. While management and public policy in many arenas often proceed in isolation of one another, we suggest that co-management principles are applicable to a wide range of coastal issues where there are a wide range of users and interest groups. This is even more important in heavily populated states, such as New Jersey, where there are intensive pressures on nearly all regions of the land-margin interface. Further, the conflicts between human users and natural resources will become more intense in the future as land values increase, putting even more pressure on the use of the water surfaces by both recreational and commercial interests. Although what continued actions and public education are required to maintain the compliance is unclear, swift and dramatic action in 1998 resulted in a return to a viable reproductive colony of Common Terns. The co-management in Barnegat Bay was an experiment, and one that we will try to enlarge for a wider region of New Jersey and the Atlantic Coast. The resolution of the PWC–Common Tern conflict in Barnegat Bay, in sum, provides important lessons regarding coastal policy and management.