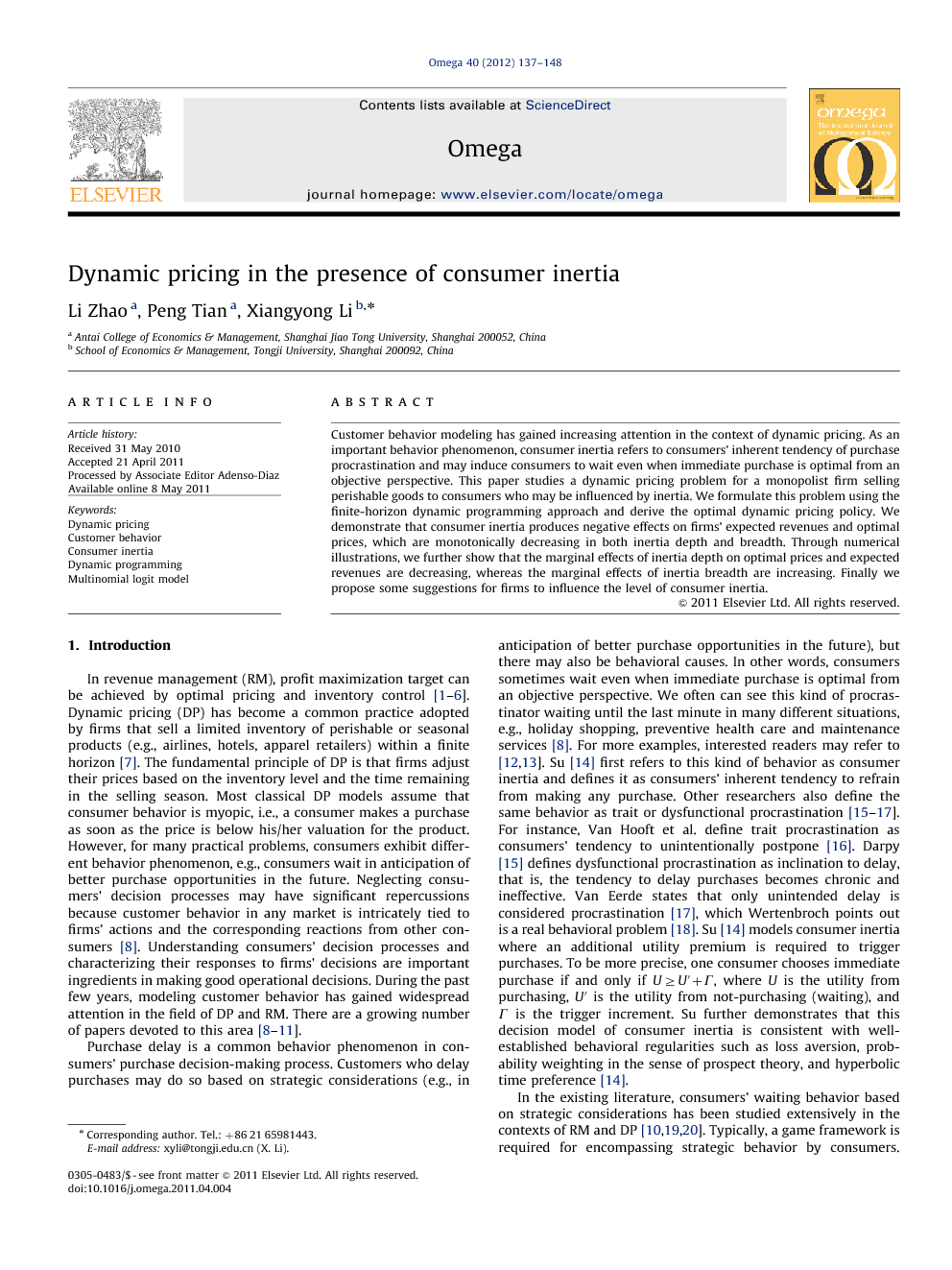 Customer behavior modeling has gained increasing attention in the context of dynamic pricing. As an important behavior phenomenon, consumer inertia refers to consumers' inherent tendency of purchase procrastination and may induce consumers to wait even when immediate purchase is optimal from an objective perspective. This paper studies a dynamic pricing problem for a monopolist firm selling perishable goods to consumers who may be influenced by inertia. We formulate this problem using the finite-horizon dynamic programming approach and derive the optimal dynamic pricing policy. We demonstrate that consumer inertia produces negative effects on firms' expected revenues and optimal prices, which are monotonically decreasing in both inertia depth and breadth. Through numerical illustrations, we further show that the marginal effects of inertia depth on optimal prices and expected revenues are decreasing, whereas the marginal effects of inertia breadth are increasing. Finally we propose some suggestions for firms to influence the level of consumer inertia.

In revenue management (RM), profit maximization target can be achieved by optimal pricing and inventory control [1], [2], [3], [4], [5] and [6]. Dynamic pricing (DP) has become a common practice adopted by firms that sell a limited inventory of perishable or seasonal products (e.g., airlines, hotels, apparel retailers) within a finite horizon [7]. The fundamental principle of DP is that firms adjust their prices based on the inventory level and the time remaining in the selling season. Most classical DP models assume that consumer behavior is myopic, i.e., a consumer makes a purchase as soon as the price is below his/her valuation for the product. However, for many practical problems, consumers exhibit different behavior phenomenon, e.g., consumers wait in anticipation of better purchase opportunities in the future. Neglecting consumers' decision processes may have significant repercussions because customer behavior in any market is intricately tied to firms' actions and the corresponding reactions from other consumers [8]. Understanding consumers' decision processes and characterizing their responses to firms' decisions are important ingredients in making good operational decisions. During the past few years, modeling customer behavior has gained widespread attention in the field of DP and RM. There are a growing number of papers devoted to this area [8], [9], [10] and [11]. Purchase delay is a common behavior phenomenon in consumers' purchase decision-making process. Customers who delay purchases may do so based on strategic considerations (e.g., in anticipation of better purchase opportunities in the future), but there may also be behavioral causes. In other words, consumers sometimes wait even when immediate purchase is optimal from an objective perspective. We often can see this kind of procrastinator waiting until the last minute in many different situations, e.g., holiday shopping, preventive health care and maintenance services [8]. For more examples, interested readers may refer to [12] and [13]. Su [14] first refers to this kind of behavior as consumer inertia and defines it as consumers' inherent tendency to refrain from making any purchase. Other researchers also define the same behavior as trait or dysfunctional procrastination [15], [16] and [17]. For instance, Van Hooft et al. define trait procrastination as consumers' tendency to unintentionally postpone [16]. Darpy [15] defines dysfunctional procrastination as inclination to delay, that is, the tendency to delay purchases becomes chronic and ineffective. Van Eerde states that only unintended delay is considered procrastination [17], which Wertenbroch points out is a real behavioral problem [18]. Su [14] models consumer inertia where an additional utility premium is required to trigger purchases. To be more precise, one consumer chooses immediate purchase if and only if U≥U′+ΓU≥U′+Γ, where U is the utility from purchasing, U′U′ is the utility from not-purchasing (waiting), and ΓΓ is the trigger increment. Su further demonstrates that this decision model of consumer inertia is consistent with well-established behavioral regularities such as loss aversion, probability weighting in the sense of prospect theory, and hyperbolic time preference [14]. In the existing literature, consumers' waiting behavior based on strategic considerations has been studied extensively in the contexts of RM and DP [10], [19] and [20]. Typically, a game framework is required for encompassing strategic behavior by consumers. However, the behavior of purchase delay based on behavioral considerations has received little research attention. To the best of our knowledge, most of the existing literature except for [14] focuses on the role and the causes of purchase delay [15], [21], [22], [23], [24] and [25]. But how consumer inertia may affect firms' pricing policy in a general dynamic pricing context and the practical recommendations for firms to influence the level of consumer inertia have not been intensively explored. In this paper, we study consumers' behavior of purchase delay (consumer inertia) in a general DP context that we believe substantially fills this void. In this paper, we analyze a multi-period dynamic pricing problem for a monopolist firm selling perishable goods to consumers who may be influenced by inertia. Following the model of consumer inertia proposed in [14], we explicitly model the consumer dynamic choice process using the classical multinomial logit (MNL) model, in which we specify the probability of purchasing one unit of product as a function of inertia. The MNL model is widely used in the marketing literature and its popularity stems from the fact that it is analytically tractable, relatively accurate, and can be estimated easily using standard statistical techniques [26]. At each decision epoch, the firm dynamically determines the most profitable price for the product to be offered and maximize the total expected revenues over the selling season. Given the new model of consumer choice behavior, we then present a stochastic dynamic programming formulation for the multi-period dynamic pricing problem in the presence of consumer inertia. We next derive the optimal policy for the resulting dynamic program. Not only does the optimal pricing policy depend on the inventory scarcity, but also it is significantly influenced by the level of consumer inertia in two dimensions: depth of inertia (i.e., extent of inertia) and breadth of inertia (i.e., probability that a customer is affected by inertia). Moreover, we show that the optimal price and expected revenues are decreasing in both inertia depth and breadth. With a simulation study, we numerically examine the effects of consumer inertia on firms' dynamic pricing strategies and the interplay of consumer inertia and inventory scarcity. We demonstrate that consumer inertia does significantly hurt firms' expected revenues and the interplay between inertia and inventory scarcity leads to complicated patterns of optimal price. Based on our results, we also discuss some practical recommendations for firms to influence the level of consumer inertia. The remainder of this paper is organized as follows. In Section 2, we review the related works in the literature. In Section 3, we present the model formulation. We then characterize the optimal prices in Section 4 followed by a simulation study presented in Section 5. In Section 6, we discuss some measures for firms to influence the level of consumer inertia. We finally summarize this paper in Section 7

Consumers may procrastinate purchases based on behavioral considerations. They sometimes wait even when immediate purchase is optimal. This is a kind of behavioral phenomenon of consumer inertia. We study this customer behavior in a multi-period dynamic pricing context in which a monopolist firm sells goods to consumers who may be rational or influenced by inertia. We present a stochastic dynamic programming formulation and derive the optimal pricing policy in the presence of consumer inertia. Moreover, we numerically investigate how inertia depth and breadth influence firms' expected revenues and optimal pricing policy in two situations: fixed inventory level and variable inventory level. Simulation results demonstrate that inertia significantly hurts firms' expected revenues and that both inertia depth and breadth have produced negative effects on optimal prices. Whenever inventory level is either fixed or variable, the optimal prices we find are monotonically decreasing in both inertia depth and breadth. More importantly consumer inertia produces different marginal effects on firms' optimal prices and expected revenues: the marginal effect of inertia depth is decreasing, whereas the marginal effect of inertia breadth is increasing. In addition, results further show that the interplay between inertia and inventory scarcity has led to complicated of price patterns. The optimal price curves grow smoother as inventory scarcity decreases. This suggests that when inventory is moderate, optimal prices are fairly stable. Finally, we present some possible strategies for firms to influence the level of consumer inertia. In the future work, we can incorporate demand learning into dynamic pricing in the presence of consumer inertia. For instance, firms may gather and store customer and transaction information, and use the results to update real-time demand and estimate parameters of consumer inertia. In addition, it is also interesting to study customer waiting behavior in the dynamic pricing for substitutable products and examine the effects of consumer inertia on the inventory decisions.