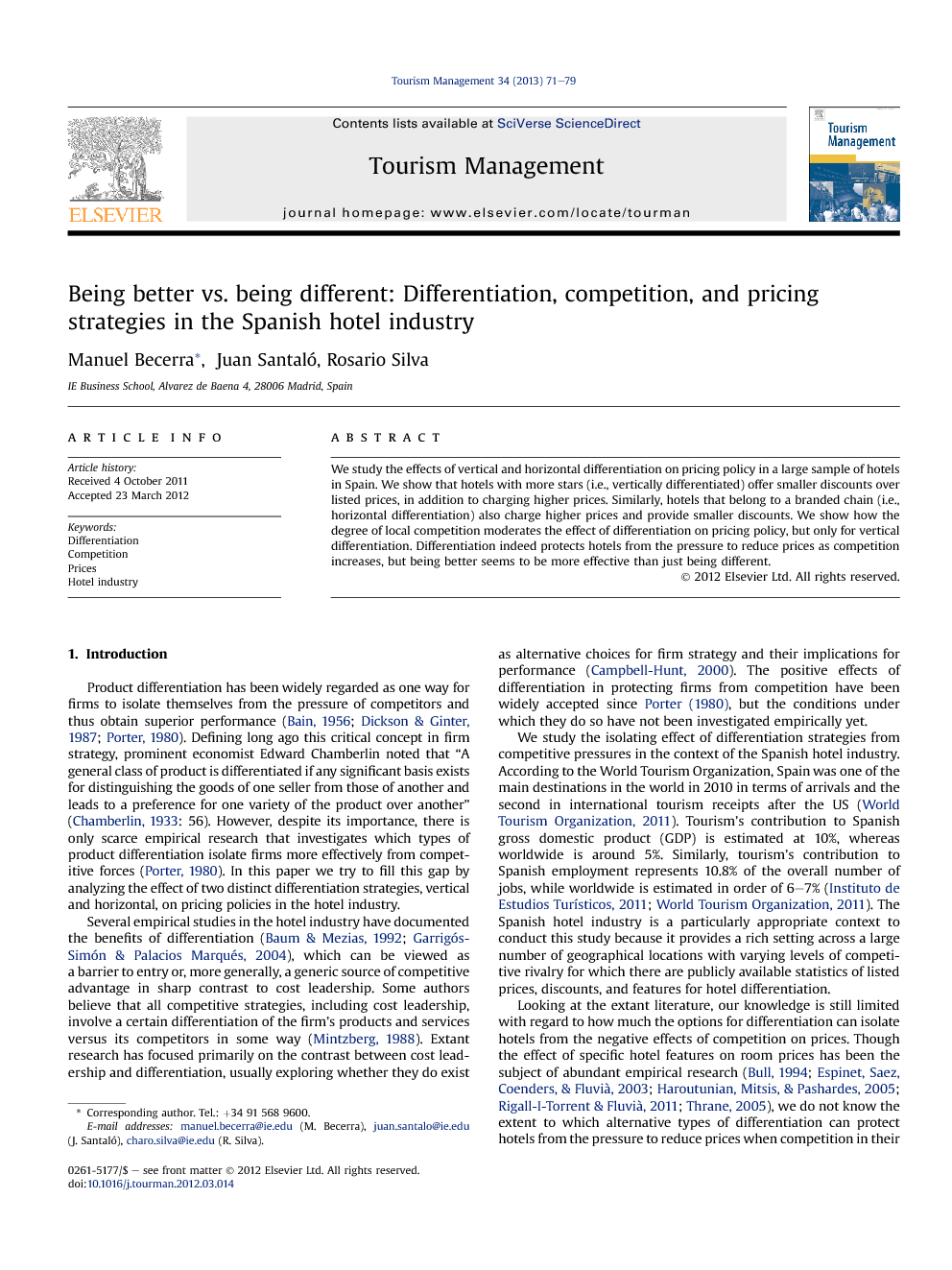 Product differentiation has been widely regarded as one way for firms to isolate themselves from the pressure of competitors and thus obtain superior performance (Bain, 1956; Dickson & Ginter, 1987; Porter, 1980). Defining long ago this critical concept in firm strategy, prominent economist Edward Chamberlin noted that “A general class of product is differentiated if any significant basis exists for distinguishing the goods of one seller from those of another and leads to a preference for one variety of the product over another” (Chamberlin, 1933: 56). However, despite its importance, there is only scarce empirical research that investigates which types of product differentiation isolate firms more effectively from competitive forces (Porter, 1980). In this paper we try to fill this gap by analyzing the effect of two distinct differentiation strategies, vertical and horizontal, on pricing policies in the hotel industry. Several empirical studies in the hotel industry have documented the benefits of differentiation (Baum & Mezias, 1992; Garrigós-Simón & Palacios Marqués, 2004), which can be viewed as a barrier to entry or, more generally, a generic source of competitive advantage in sharp contrast to cost leadership. Some authors believe that all competitive strategies, including cost leadership, involve a certain differentiation of the firm's products and services versus its competitors in some way (Mintzberg, 1988). Extant research has focused primarily on the contrast between cost leadership and differentiation, usually exploring whether they do exist as alternative choices for firm strategy and their implications for performance (Campbell-Hunt, 2000). The positive effects of differentiation in protecting firms from competition have been widely accepted since Porter (1980), but the conditions under which they do so have not been investigated empirically yet. We study the isolating effect of differentiation strategies from competitive pressures in the context of the Spanish hotel industry. According to the World Tourism Organization, Spain was one of the main destinations in the world in 2010 in terms of arrivals and the second in international tourism receipts after the US (World Tourism Organization, 2011). Tourism's contribution to Spanish gross domestic product (GDP) is estimated at 10%, whereas worldwide is around 5%. Similarly, tourism's contribution to Spanish employment represents 10.8% of the overall number of jobs, while worldwide is estimated in order of 6–7% (Instituto de Estudios Turísticos, 2011; World Tourism Organization, 2011). The Spanish hotel industry is a particularly appropriate context to conduct this study because it provides a rich setting across a large number of geographical locations with varying levels of competitive rivalry for which there are publicly available statistics of listed prices, discounts, and features for hotel differentiation. Looking at the extant literature, our knowledge is still limited with regard to how much the options for differentiation can isolate hotels from the negative effects of competition on prices. Though the effect of specific hotel features on room prices has been the subject of abundant empirical research (Bull, 1994; Espinet, Saez, Coenders, & Fluvià, 2003; Haroutunian, Mitsis, & Pashardes, 2005; Rigall-I-Torrent & Fluvià, 2011; Thrane, 2005), we do not know the extent to which alternative types of differentiation can protect hotels from the pressure to reduce prices when competition in their geographical area increases. Based on the differentiation literature in IO (Beath & Katsoulacos, 1991), we investigate how vertical differentiation (i.e., competing along one product dimension valued similarly by all customers, such as overall hotel quality) and horizontal differentiation (i.e., offering a unique combination of product features that satisfies the needs of a specific customer segment) can both be used to insulate hotels from an increase in the degree of competition in its location. In addition to finding support for the effects of both vertical and horizontal differentiation on room prices and discounts, our empirical results show that “being better” (i.e., vertically differentiated) allows hotels to resort less to room price discounts from their listed prices as competition increases than merely “being different” (horizontally differentiated). In the rest of the paper we develop several hypotheses about the effects of vertical and horizontal differentiation on hotel room prices and how competitive rivalry moderates these effects. We use a sample of 1490 hotels in 67 locations in Spain to test the hypotheses, which are generally supported.

The results from this study confirm our expectations regarding the relationship between differentiation, competition, and pricing policy in the hospitality industry. Hotels use differentiation strategies to escape from the competitive pressure to reduce prices. The empirical evidence regarding main effects was generally supportive using different types of differentiation strategy (vertical and horizontal), measures of competition (number of direct competitors and geographical distance), and pricing policy (listed prices and discounts). Our empirical analysis discovered that vertical differentiation seems to be more important than horizontal differentiation in the understanding of pricing policy. Differences in hotel category explain a greater percentage of variance in both prices and discounts than hotel chain, as evidenced by the higher partial r2 and standardized coefficient size. Furthermore, the interaction of hotel category with competition reinforces its positive effect in tempering competitive pressures over prices, while the competition*chain interaction was usually insignificant. Thus, vertical differentiation seems to be a more effective way to cope with increases in competition. It appears that hotels with generally acknowledged superior quality are better prepared to deal with an increase in competitive rivalry than other organizations whose superiority is only perceived by a specific customer group. Certainly, horizontal differentiation that attracts a specific customer segment is an adequate way to reduce competitive pressure on prices, but being generally perceived as providing the best service is more effective. Based on our results, the managerial implications are straightforward. Differentiation indeed isolates companies from competitive pressures, but being better seems to be preferable to just being different, though vertical differentiation may trigger a strategic race to be the best that only a few hotels can win. Thus, increasing the objective quality of the services provided by a hotel, measured in our study by the number of stars, protects more from the pressure to reduce prices than mere membership in a hotel chain.