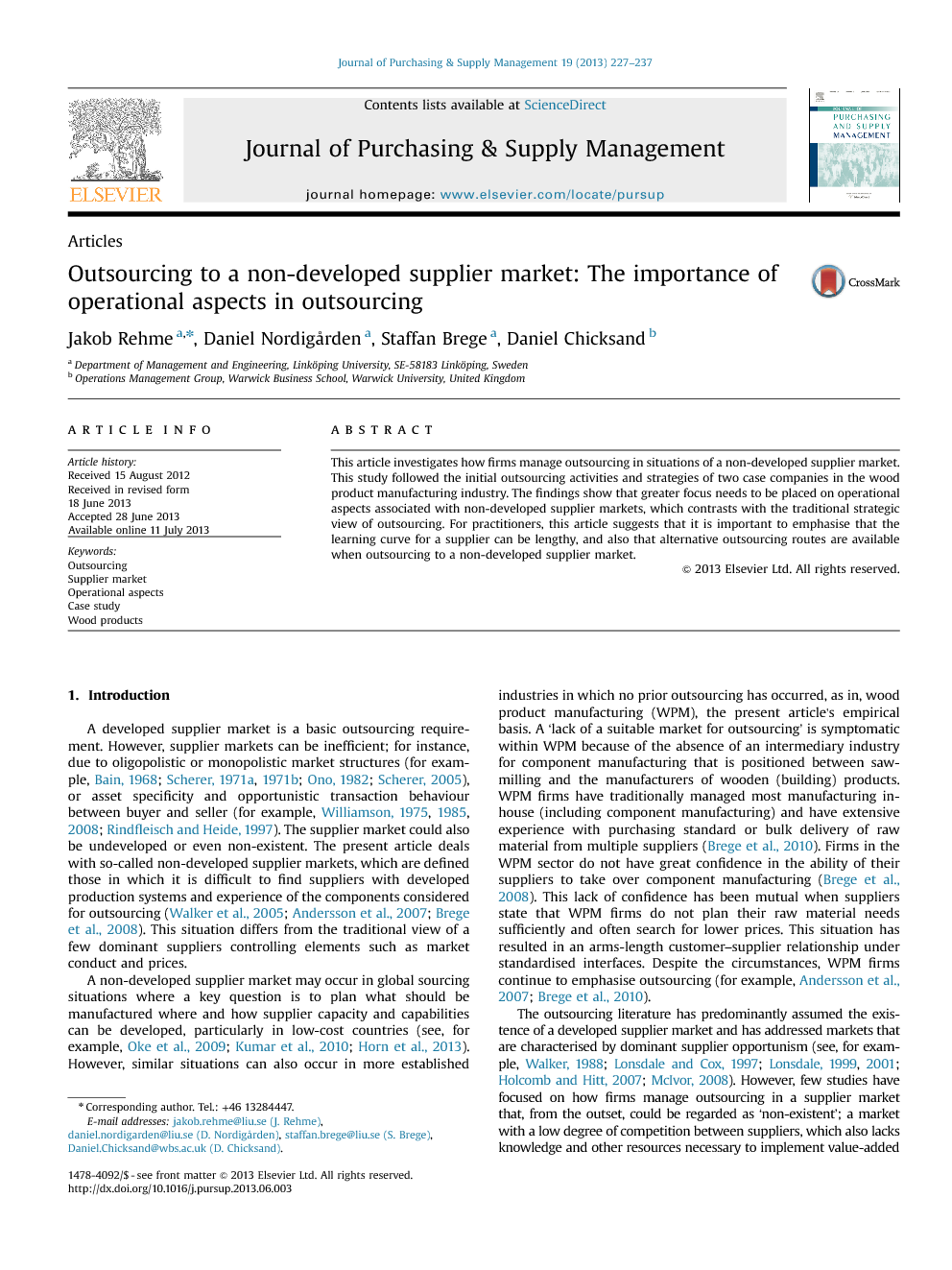 A developed supplier market is a basic outsourcing requirement. However, supplier markets can be inefficient; for instance, due to oligopolistic or monopolistic market structures (for example, Bain, 1968, Scherer, 1971a, Scherer, 1971b and Ono, 1982; Scherer, 2005), or asset specificity and opportunistic transaction behaviour between buyer and seller (for example, Williamson, 1975, Williamson, 1985, Williamson, 2008 and Rindfleisch and Heide, 1997). The supplier market could also be undeveloped or even non-existent. The present article deals with so-called non-developed supplier markets, which are defined those in which it is difficult to find suppliers with developed production systems and experience of the components considered for outsourcing (Walker et al., 2005, Andersson et al., 2007 and Brege et al., 2008). This situation differs from the traditional view of a few dominant suppliers controlling elements such as market conduct and prices. A non-developed supplier market may occur in global sourcing situations where a key question is to plan what should be manufactured where and how supplier capacity and capabilities can be developed, particularly in low-cost countries (see, for example, Oke et al., 2009, Kumar et al., 2010 and Horn et al., 2013). However, similar situations can also occur in more established industries in which no prior outsourcing has occurred, as in, wood product manufacturing (WPM), the present article's empirical basis. A ‘lack of a suitable market for outsourcing’ is symptomatic within WPM because of the absence of an intermediary industry for component manufacturing that is positioned between sawmilling and the manufacturers of wooden (building) products. WPM firms have traditionally managed most manufacturing in-house (including component manufacturing) and have extensive experience with purchasing standard or bulk delivery of raw material from multiple suppliers (Brege et al., 2010). Firms in the WPM sector do not have great confidence in the ability of their suppliers to take over component manufacturing (Brege et al., 2008). This lack of confidence has been mutual when suppliers state that WPM firms do not plan their raw material needs sufficiently and often search for lower prices. This situation has resulted in an arms-length customer–supplier relationship under standardised interfaces. Despite the circumstances, WPM firms continue to emphasise outsourcing (for example, Andersson et al., 2007 and Brege et al., 2010). The outsourcing literature has predominantly assumed the existence of a developed supplier market and has addressed markets that are characterised by dominant supplier opportunism (see, for example, Walker, 1988, Lonsdale and Cox, 1997, Lonsdale, 1999, Lonsdale, 2001, Holcomb and Hitt, 2007 and McIvor, 2008). However, few studies have focused on how firms manage outsourcing in a supplier market that, from the outset, could be regarded as ‘non-existent’; a market with a low degree of competition between suppliers, which also lacks knowledge and other resources necessary to implement value-added strategies. The present article addresses this gap by investigating strategies and other issues that are illuminated by the decision to outsource without an intermediary industry that could act as a suitable partner for component manufacturing. The article makes three distinctive contributions to the more general field of purchasing and supply management research. Firstly, with the help of our longitudinal case studies, we illustrate how firms manage outsourcing when they lack an initial supplier market. One could contend that a non-existing market essentially leaves a company with two obvious strategies. It can either (a) decide not to outsource because it feels that no other company could do the job better, or it can (b) proactively build a supplier market to which it can outsource. However, the research has found that this process is more multifaceted, with alternate routes and issues to be addressed. Secondly, we combine the resource-based view and transaction cost economics, and contribute by adding greater depth to the understanding of outsourcing to a non-developed supplier market. In particular, the findings increase the understanding of the operational level of outsourcing decisions vs. the strategic level, as well as the value of the traditional core/non-core logic in outsourcing strategies. Earlier studies have called for more research in both areas (e.g., Momme and Hvolby, 2002, Marshall et al., 2007, McIvor, 2009, Boulaksil and Fransoo, 2010 and Dekkers, 2011). Thirdly, our proposed outsourcing framework provides managers with an aide memoire when considering outsourcing in non-developed supplier markets. The remainder of this article is organised as follows: the next section conducts a literature review, and then addresses the research methodology. This is followed by descriptions of the two case companies and their outsourcing activities and then the analysis. Finally, we draw conclusions with implications for theory and practitioners as well as for future research.

The introduction of this article stated that a fundamental requirement for outsourcing is an available market. Indeed, finding and selecting the appropriate suppliers is a critical success factor in any sourcing decision (Dabhilkar et al., 2009, Bruno et al., 2012, Horn et al., 2013 and Najafi et al., 2013). The present article has highlighted the fact that not all contexts/industrial settings have developed supplier markets to directly manage outsourcing. This further complicates outsourcing and supplier selection; for the case study companies examined here, outsourcing became a long journey of trial and error. The complicating factors for outsourcing in the context studied are manifest at two levels. This article has primarily discussed the difficulty in finding competent suppliers with sufficient capacity to deliver and fulfil high demands on cost efficiency, capacity, quality and short lead times. We have found that companies contemplating outsourcing under such circumstances need to place greater focus on operational aspects, which need to be thoroughly evaluated together with the more traditional resource-based focus in terms of a core competence approach. This finding aligns with several earlier studies that have identified a gap in the literature regarding strategic and operational dimensions in outsourcing decision (cf. Boulaksil and Fransoo, 2010 and Dekkers, 2011). For example, Dekkers (2011) found that strategic decision making based on RBV (as well as TCA) is insufficient to account for operational issues. Because the operational aspects were not solved in the short term, the outsourcing decision became a never-ending process, with a high need to safeguard and without any real closure regarding the case companies’ own in-house capacity. However, it is also important to remember that wood product manufacturers and sawmills have a history of misunderstandings.