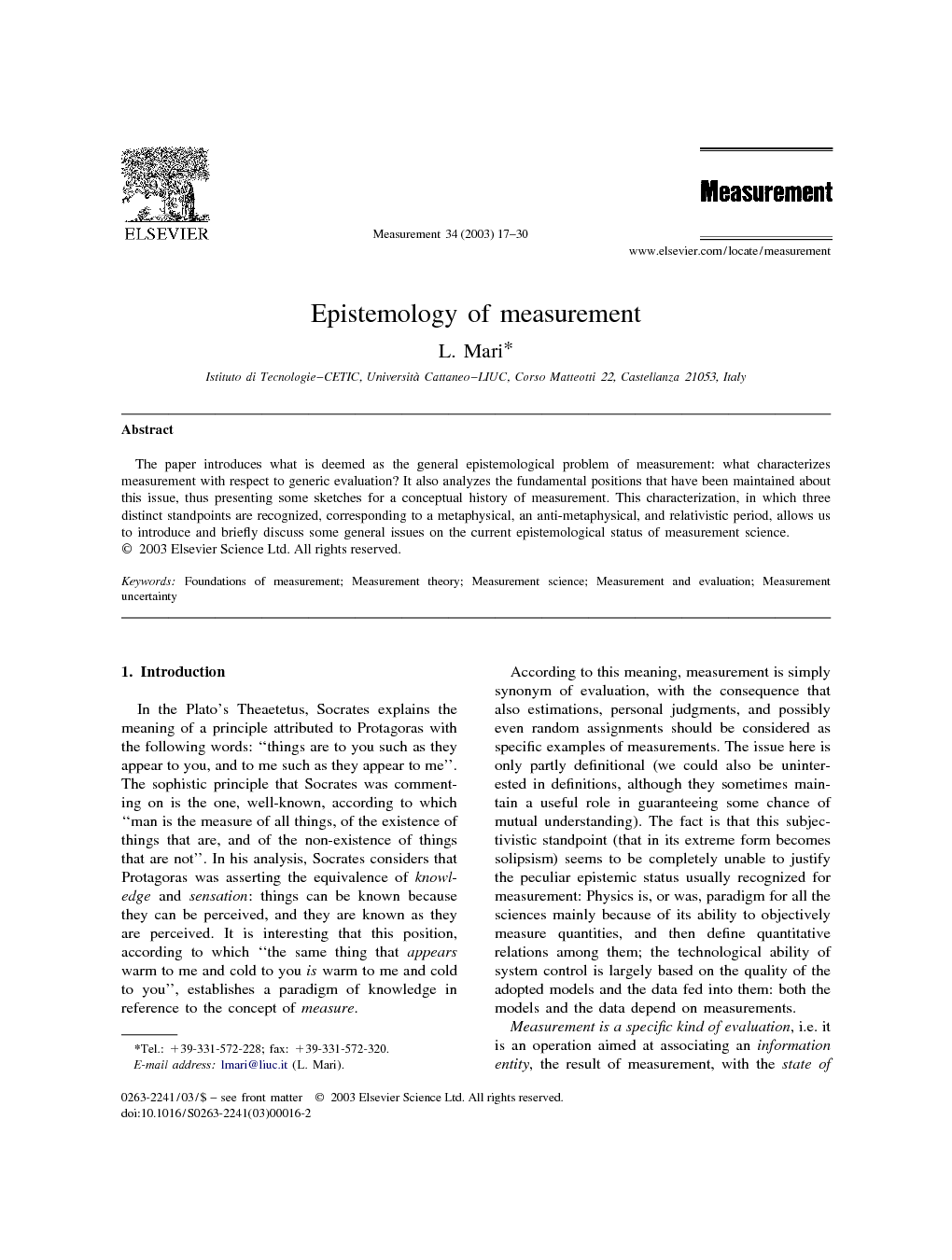 The paper introduces what is deemed as the general epistemological problem of measurement: what characterizes measurement with respect to generic evaluation? It also analyzes the fundamental positions that have been maintained about this issue, thus presenting some sketches for a conceptual history of measurement. This characterization, in which three distinct standpoints are recognized, corresponding to a metaphysical, an anti-metaphysical, and relativistic period, allows us to introduce and briefly discuss some general issues on the current epistemological status of measurement science.

In the Plato’s Theaetetus, Socrates explains the meaning of a principle attributed to Protagoras with the following words: “things are to you such as they appear to you, and to me such as they appear to me”. The sophistic principle that Socrates was commenting on is the one, well-known, according to which “man is the measure of all things, of the existence of things that are, and of the non-existence of things that are not”. In his analysis, Socrates considers that Protagoras was asserting the equivalence of knowledge and sensation: things can be known because they can be perceived, and they are known as they are perceived. It is interesting that this position, according to which “the same thing that appears warm to me and cold to you is warm to me and cold to you”, establishes a paradigm of knowledge in reference to the concept of measure. According to this meaning, measurement is simply synonym of evaluation, with the consequence that also estimations, personal judgments, and possibly even random assignments should be considered as specific examples of measurements. The issue here is only partly definitional (we could also be uninterested in definitions, although they sometimes maintain a useful role in guaranteeing some chance of mutual understanding). The fact is that this subjectivistic standpoint (that in its extreme form becomes solipsism) seems to be completely unable to justify the peculiar epistemic status usually recognized for measurement: Physics is, or was, paradigm for all the sciences mainly because of its ability to objectively measure quantities, and then define quantitative relations among them; the technological ability of system control is largely based on the quality of the adopted models and the data fed into them: both the models and the data depend on measurements. Measurement is a specific kind of evaluation, i.e. it is an operation aimed at associating an information entity, the result of measurement, with the state of the system under measurement in reference to a given quantity, the measurand. Even if not unconditionally adhering to the praises that can be easily found in the scientific literature about the role of measurement (e.g. “the progress of civilization is in strict relation to the development of measures” [1] or “a positive information about a system cannot be obtained but by a measurement” [2], up to the common myth according to which system control necessarily requires measurement: it is clear that nothing similar would be stated about generic evaluations), it is plausible that measurement has something special in comparison to a generic evaluation. We believe that the quest for this peculiarity can be aptly regarded as the general epistemological problem of measurement, that we synthetically formulate as: Problem A. Provided that measurement is an evaluation, what characterizes measurement with respect to generic evaluation? It should be clear that this problem relates to the issue of ‘what is it useful for?’ far more than of ‘what is it?’, and therefore its answer has operative, and not only terminological, implications. Indeed the quality, and sometimes also the quantity, of the information conveyed by measurement depends on the kind of the answer given to the problem. In the course of history, the epistemic peculiarities of measurement have been found in at least three distinct areas: • Ontological reasons (measurement is an evaluation able to determine those numbers that are essential properties of things) • Formal reasons (measurement is an evaluation producing symbols that can be formally dealt with in a well definite way) • Informational reasons (measurement is an evaluation whose results are informationally adequate to given goals) Goal of this paper is to sketch some basics for a critical analysis of these three interpretations, presented in the diachronic perspective of a ‘history of ideas’, and then to investigate some consequences of such an epistemological reconstruction for the current status of Measurement Science. As a first step let us analyze the premise of the Problem A, by shortly discussing the epistemological status of evaluation.