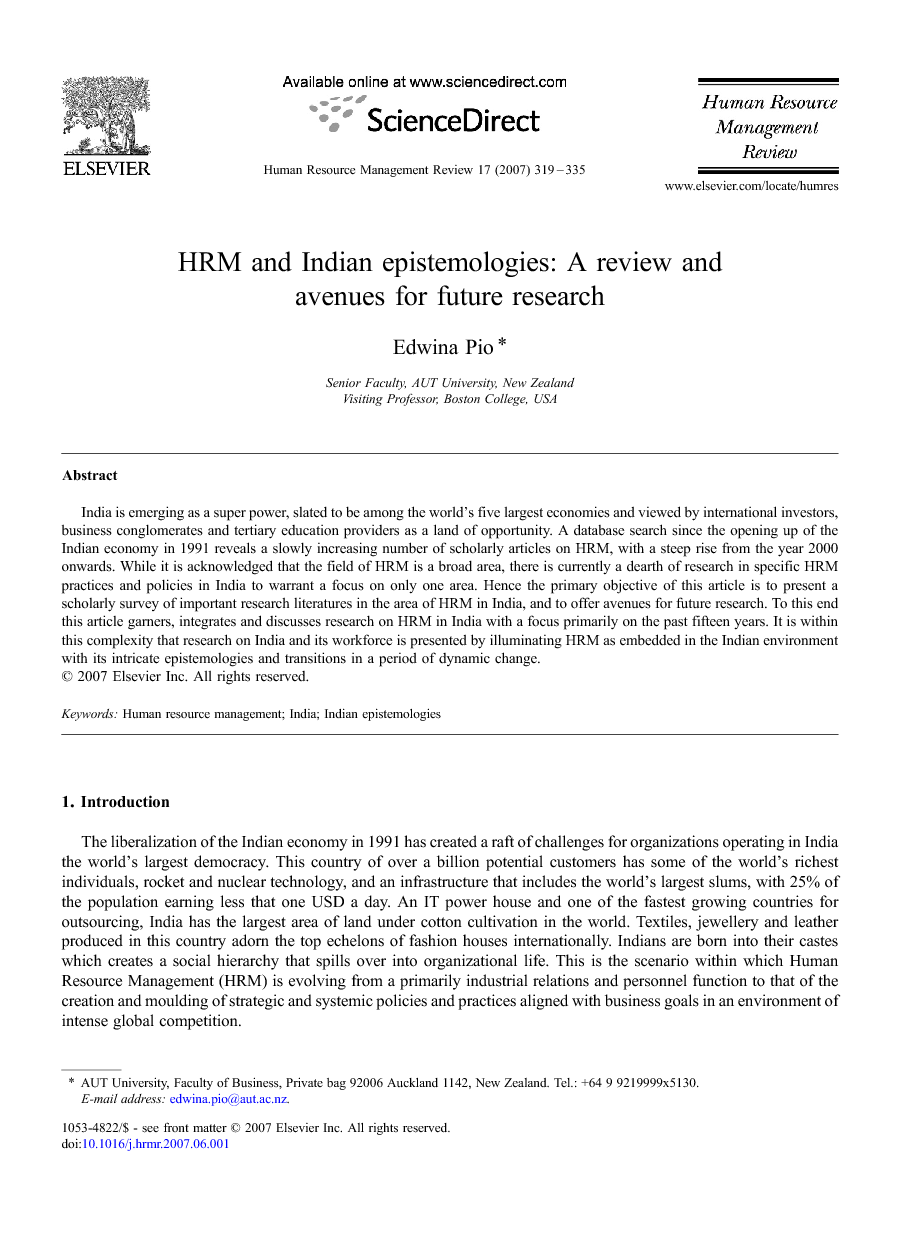 India is emerging as a super power, slated to be among the world's five largest economies and viewed by international investors, business conglomerates and tertiary education providers as a land of opportunity. A database search since the opening up of the Indian economy in 1991 reveals a slowly increasing number of scholarly articles on HRM, with a steep rise from the year 2000 onwards. While it is acknowledged that the field of HRM is a broad area, there is currently a dearth of research in specific HRM practices and policies in India to warrant a focus on only one area. Hence the primary objective of this article is to present a scholarly survey of important research literatures in the area of HRM in India, and to offer avenues for future research. To this end this article garners, integrates and discusses research on HRM in India with a focus primarily on the past fifteen years. It is within this complexity that research on India and its workforce is presented by illuminating HRM as embedded in the Indian environment with its intricate epistemologies and transitions in a period of dynamic change.

The liberalization of the Indian economy in 1991 has created a raft of challenges for organizations operating in India the world's largest democracy. This country of over a billion potential customers has some of the world's richest individuals, rocket and nuclear technology, and an infrastructure that includes the world's largest slums, with 25% of the population earning less that one USD a day. An IT power house and one of the fastest growing countries for outsourcing, India has the largest area of land under cotton cultivation in the world. Textiles, jewellery and leather produced in this country adorn the top echelons of fashion houses internationally. Indians are born into their castes which creates a social hierarchy that spills over into organizational life. This is the scenario within which Human Resource Management (HRM) is evolving from a primarily industrial relations and personnel function to that of the creation and moulding of strategic and systemic policies and practices aligned with business goals in an environment of intense global competition. With its colonial heritage, India has legislative and financial systems that tend to fall within the comfort zones of the West, a large workforce who are conversant with the English language, and a fiercely independent media. Despite increasing numbers of international joint ventures (JV) and multi national corporations (MNC) vying with each other for doing business in India, along with the Indian public and private sector companies, and a growing body of theoretical and empirical literature on the use of strategic and systemic HRM in India, a comprehensive picture of HRM in the Indian context is lacking. Hence the purpose of this paper is to provide a review of the literature on HRM in India and suggest some avenues for future research. A complex challenge exists as the literature pertaining to India and HRM has only more recently been published in international journals, and it is possible that there is much available in the local Indian languages and local publications. The databases accessed included ABI Inform, Business Source Premier, Emerald Fulltext, Informaworld, Management and Organisation Studies, ProQuest 5000 International, Science Direct and Web of Science. Google Scholar was also utilized. These databases typically include research on HRM and the net was cast fairly wide as HRM in India is an emerging area in international journal publications. The reference sections of the journal articles were also examined in order to ensure that relevant research was not excluded. Based on the existing scholarly literature available on HRM in India, a general framework is offered to structure the relevant topics. The framework is broad for ease of pulling together and navigating the various strands of extant research on HRM in India, despite the knowledge that there are multiple and complex relations between and within each of the delineated areas. See Fig. 1 ‘The mega framework — environmental embeddedness’ and Fig. 2 ‘The conceptual framework — HRM in India’. Fig. 1. The mega framework — environmental embeddedness. Figure options Fig. 2. The conceptual framework — HRM in India. Figure options This paper is structured as follows: First information about India is presented on the economic and socio-cultural context in which HRM in India is embedded. This is followed by an understanding of how the HRM function is perceived in India. Next the macro HRM configuration is presented through extant research on strategic HRM. Comparative HRM is included in this macro configuration. The next section presents systemic HRM practices and brings together research on acquiring, enhancing and compensating through HRM, and includes recruitment and selection, performance and career management, training and development, compensation, retention, attrition and downsizing. Subsequently, HRM outcomes are offered which include organizational commitment and empowerment, organizational learning and ethical facets pertaining to HRM. The final section presents avenues for future research.

This review has presented a broad sweep of issues pertaining to HRM in India through the lens of Indian epistemologies with the purpose of presenting the extant scholarship in this area and suggesting avenues for future research. With the emergence of India Inc. this article gives cognizance to and facilitates the understanding of the ultifaceted environment within which HRM operates in India. A poignant hope is that this information will be helpful to both scholars and practitioners who wish to engage with India for research and practice in HRM —for India is her people.