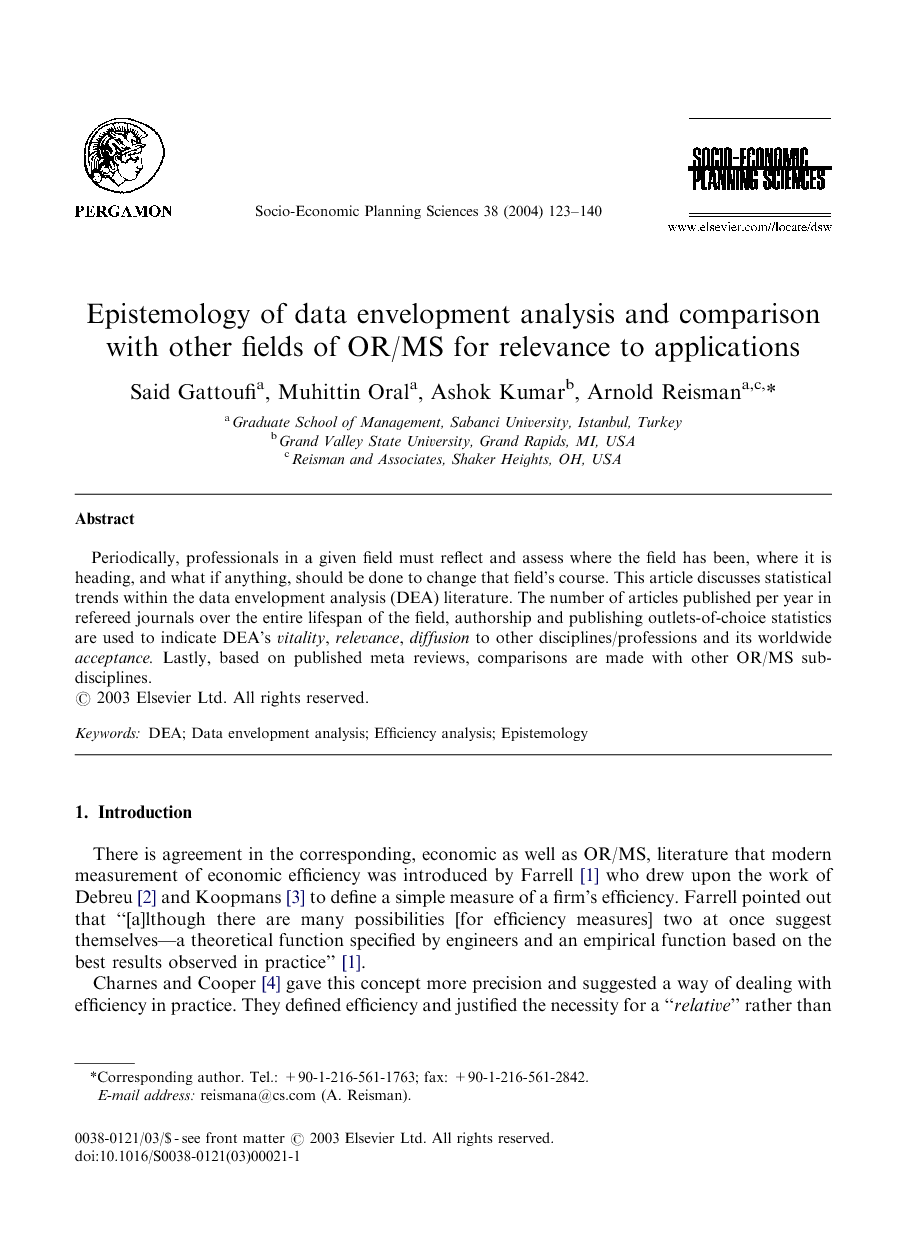 Periodically, professionals in a given field must reflect and assess where the field has been, where it is heading, and what if anything, should be done to change that field's course. This article discusses statistical trends within the data envelopment analysis (DEA) literature. The number of articles published per year in refereed journals over the entire lifespan of the field, authorship and publishing outlets-of-choice statistics are used to indicate DEA's vitality, relevance, diffusion to other disciplines/professions and its worldwide acceptance. Lastly, based on published meta reviews, comparisons are made with other OR/MS sub-disciplines.

There is agreement in the corresponding, economic as well as OR/MS, literature that modern measurement of economic efficiency was introduced by Farrell [1] who drew upon the work of Debreu [2] and Koopmans [3] to define a simple measure of a firm's efficiency. Farrell pointed out that “[a]lthough there are many possibilities [for efficiency measures] two at once suggest themselves—a theoretical function specified by engineers and an empirical function based on the best results observed in practice” [1]. Charnes and Cooper [4] gave this concept more precision and suggested a way of dealing with efficiency in practice. They defined efficiency and justified the necessity for a “relative” rather than an “absolute” measure thereof: more than 20 years later, the CCR model remains central in the DEA literature. [The] distinction between effectiveness and efficiency need not be emphasized in evaluating private enterprise activities…. We lay aside the more difficult problem of effectiveness and assume that this has been decided in the choice of inputs (resources) to be used and outputs (benefits) to be achieved, as well as the way in which the inputs and outputs are to be measured: 100% of efficiency is attained for any Decision Making Unit (DMU) only when: (a) None of its outputs can be increased without either i. increasing one or more of its inputs or ii. decreasing some of its other outputs (b) None of its inputs can be decreased without either i. decreasing some of its outputs or ii. increasing some of its other inputs. Publication of the Charnes, Cooper and Rhodes (CCR) model [5] is widely recognized as the birth of data envelopment analysis (DEA) 1. That paper formulated the evaluation of a firm's efficiency “in a stringent mathematical form more readily understood and absorbed by the research community” [7]. To date, more than 20 years later, the CCR model remains central within the DEA literature. In 1996, Seiford [8], traced DEA's evolution from the early articles by Koopmans [3], Debreu [2], Farrell [1], and CCR [5] up to the “state-of-the-art” (SOA) in DEA, circa 1995 and summarized the SOA circa 1980, 1985, 1990 and 1995. His paper discusses the main issues typically addressed during each 5-year period followed by a ranking of the most influential papers. With some exceptions these rankings were confirmed by citation analysis in [9]. Additionally, Seiford discusses novel applications and advances in the theory. Finally, he claims that “stochastic DEA is the most critical and difficult future issue in DEA” [10]. Although stochasticity was not new to the DEA literature, the period 1996–2001 recorded a quantum jump in the number of articles attempting to introduce it into DEA. One can question if this was a natural trend or a “bias” in the trend due to an “influential paper” produced by the “influential Seiford.” Was DEA in need of developing in that direction or was this due to a “natural drift”? How successful were these developments in real-world implementation? To be sure, the gap between “parametric methods” and DEA was significantly reduced, but was that the right direction? More debate and more insights are needed. A panoramic view through a more systematic analysis of the literature should help in this debate. At the last mile-stone year of Seiford's analysis, e.g. 1995, the literature recorded roughly 700 papers published in refereed journals [9] and that literature has grown to more than 1800 such articles circa August 2001. This represents an increase of more than 150%. As much as it was imperative to survey the literature circa 1995, it is even more so now. Seiford [10] states: “Due to the interdisciplinary nature of the research, there is a need for a single source referencing the wide range of articles appearing in the literature.” The authors of this paper agree with Seiford's statements in this regard; hence an updated and more complete bibliography of papers in refereed journals is made available in [11]. That paper is the first in a series reporting on meta research concerned with DEA. The next paper [12], provides a basis for classifying each published article so as to vividly display its scope for purposes of identification, comparison and analysis. The taxonomy allows one to distinguish the articles on the basis of the data source used, if any (D), the type of envelopment (E) invoked, the approach to analysis (A) used, and the nature (N) of the paper. Each of the above attributes D, E, A and N (DEAN) are further subdivided to obtain a detailed description of each article comprising this rather wide-ranging subdiscipline. Sample articles were classified to illustrate the descriptive power and the parsimony of that taxonomy. A scheme developed in [13] and [14] was used to study the contents of the papers contained in 989 sampled papers and the resulting statistics are presented [15]. Further, these content analysis results were compared to those obtained from similarly studying other OR/MS subdisciplines. These comparisons are also provided in [15]. This paper presents an epistemological review of DEA using the above bibliography as raw data. Moreover, the DEA literature is compared to that of other OR/MS fields such as flowshop scheduling (FSS) [16], cellular manufacturing (CM) [17], and game theory (GT) [18]. Lastly, [19] discusses the lifetime contributions to OR/MS as well as to accountancy and to economics, of one of the cofounders of DEA—W. W. Cooper. In a larger context this paper contributes to the ongoing debate [20] regarding the status and the future of OR/MS as a management discipline in light of what may be referred to as “anaemic relevance to real world problems” in the dominant OR/MS literature of the 1980s and 1990s. Arguments have surfaced that OR/MS in general has undergone a “devolution” Ackoff, [21] and what Corbett et al. [22] called “natural drift” toward what Abbott [23] referred to as the “professional regression” from its real-world roots to a preoccupation with mathematical constructs. DEA represents a counterexample to all such claims.

Over its lifespan DEA had had its roots solidly planted in real-world soils. It has enjoyed practitioner acceptance. Its vitality is demonstrated by both the high rate of literature growth and by the large number of refereed journals. The diversity of journals having DEA content speaks to its diffusion and to its relevance. The three flagship US-based OR/MS journals published but a small share of the DEA literature. This fact gives the appearance that the editorial practices of these journals were out of sync with the field’s origins, e.g., working the ‘‘swamps of relevance’’ [29]. To the extent that these journals reflected the views of the academic establishment, which they did [36] then it appears that DEA did not neatly fit into the paradigm that evolved within the academe over the last three decades. Out of the ten top contributors to the DEA literature nine are affiliated with US institutions of higher learning. This was so from the start of DEA and it is so today. Moreover, a perusal of the less prolific contributors’ affiliations indicates that much of this work is US based. This paradox leads to the inevitable conclusion that the editorial practices of the three US-based flagship OR/ MS journals, in one way or another, drove authors to seek other publishing outlets. If such is indeed the case, this is yet another indication of the ‘‘devolution,’’ of OR/MS in the US due to inbreeding of its academic establishment during the 1970s through the 1990s. As is shown by Corbett and Van Wassenhove [22], Reisman and Kirschnick [28], Denizel et al. [20] and others, there are many indications of that being so. Consequently those who advocated a post mortem for OR//MS [21] were simply reflecting on what was being published in these three premiere journals, and on what was researched by Ph.D. candidates and taught at American universities. DEA is a good counterexample and the series of papers, of which this is part, statistically demonstrate the relevance, vitality, diffusion and hence acceptance of DEA by professionals within and outside its mother discipline.